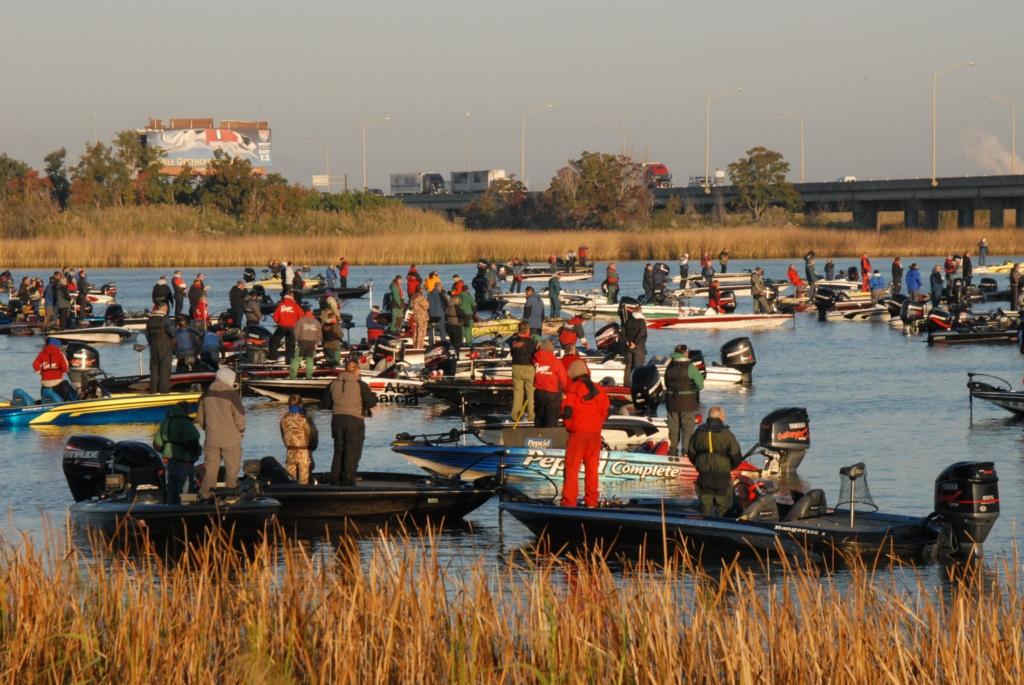 MOBILE, Ala. – NASCAR races always begin with these words: “Gentlemen, start your engines.” A fitting command for the start of the 2007 Stren Series Championship in Mobile this morning could have been, “Fishermen, trim up your engines.”

Signs of severe drought are sticking up everywhere in the Southeast, and Mobile Bay is no exception.

As the Stren Series Championship event kicked off Thursday morning, low water, low tide and consistent north winds over the last two days combined to reveal a lot of shallow mud bars around the base of Mobile Bay.

The top 40 pros from each of the Stren Series’ five different divisions were carefully plotting a way to safely navigate to their best fishing holes without ending up high and dry.

Within minutes of the official blastoff, some anglers were already pushing 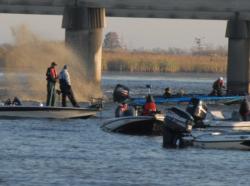 themselves off mud bars.

But the good news is low-water conditions should help concentrate the fish in the Mobile marsh.

“These conditions are a whole lot better than if this place was flooded with rolling red water,” said championship qualifier Jesse Draime of nearby Long Beach, Miss. “There are a lot of fish biting down here in the marsh – a lot of small fish – we’ll likely see a lot of 5- to 6-pound limits. It’s getting that one good 3-pound kicker that’s going to be the trick.”

Historically, the better quality bass have come from the far upper reaches of the Tombigbee and Alabama River systems. In past FLW Outdoors events held on the Mobile Delta, anglers willing to venture some 50 to 70 miles up the rivers have demonstrated where the quality bass live. But the drought has made some of the bass-rich oxbows far up the rivers inaccessible.

“A lot of those places you cannot get into right now,” Draime said. “And the ones that you can get into have a lot of the best cover sitting up high and dry on the bank.”

Recent Wal-Mart FLW Series winner Mark Rose of Marion, Ark., finished fourth in the Ranger M1 event held on the Mobile-Tensaw Delta in 2002. In that event he ran way up the rivers to catch his fish.

Rose, however, says he has had trouble relocating that quality bite far to the north.

“It’s just not as consistent as it was several years ago,” Rose said. “I have caught a couple of better quality bass up there this week, but the time between bites is just downright uncomfortable, especially with more fish biting down here. I’m almost tempted to stay down here to get a limit and then gamble on a long run up there to see if I can get just one kicker.

“Takeoff is in a few minutes, and I’m still not sure what I’m going to do,” he added. “I might just stay down here today and then make a run up there tomorrow – I just don’t know.”

One thing that will prove interesting for the anglers making the top-10 cut is how they will adjust with higher water in the finals.

“I’d have to think that by Saturday we’ll be looking at a completely different place,” 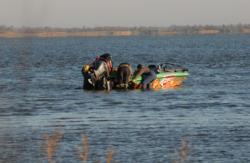 Draime said. “Once that north wind quits blowing and the water starts coming back in, we could see 2 or 3 feet of water flush back in here in the finals. Guys catching fish in low-water spots might see their bites diminish with rising water. I think, in order to win this thing, a guy is going to need lowwater areas and high-water areas and fish them according to the water level. I just don’t know if one place will hold up for four days with such drastic changes in water level.”

Draime estimates the top-10 qualifying weights after two days will be in the 17- to 18-pound range.

Anglers will take off from Chocolotta Bay Ramp, located at 1595 Battleship Parkway in Mobile, at 7 each morning.

Thursday and Friday’s weigh-ins will be held at the USS Alabama Battleship Memorial Park, which is located at 2703 Battleship Parkway in Mobile, beginning at 3 p.m.

Saturday and Sunday’s weigh-ins will be held at the Arthur R. Outlaw Mobile Convention Center, located at 1 S. Water St. in Mobile, along with the Stren Series Championship Family Fun Zone and Outdoor Show. The Family Fun Zone, which opens at noon Saturday and Sunday, features interactive displays, product samples and games for the entire family to enjoy.

Two hundred pros and 200 co-anglers (the top 40 based on points standings from each of the Stren Series’ five divisions) will compete for two days on the Mobile Delta to determine the top 10 pros and top 10 co-anglers who will advance to the final round based on their two-day accumulated weight.

Weights are cleared for the final round, and co-angler competition concludes on day three with the winner determined by the day’s heaviest catch.

Pro competition concludes on day four, with the winner determined by the heaviest accumulated weight from days three and four.

The winning pro will earn an Evinrude- or Yamaha-powered Ranger 198VX equipped with Lowrance electronics and a Minn Kota trolling motor plus $50,000 cash.

If the winner is the original owner of a qualifying Ranger boat powered by an Evinrude or Yamaha outboard that is used during the tournament, he will also receive a $25,000 bonus from Ranger and an additional $25,000 Evinrude or Yamaha bonus for a total award of $140,000. 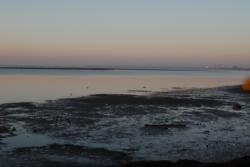