It’s spotted bass in current vs. mat flipping in Mobile 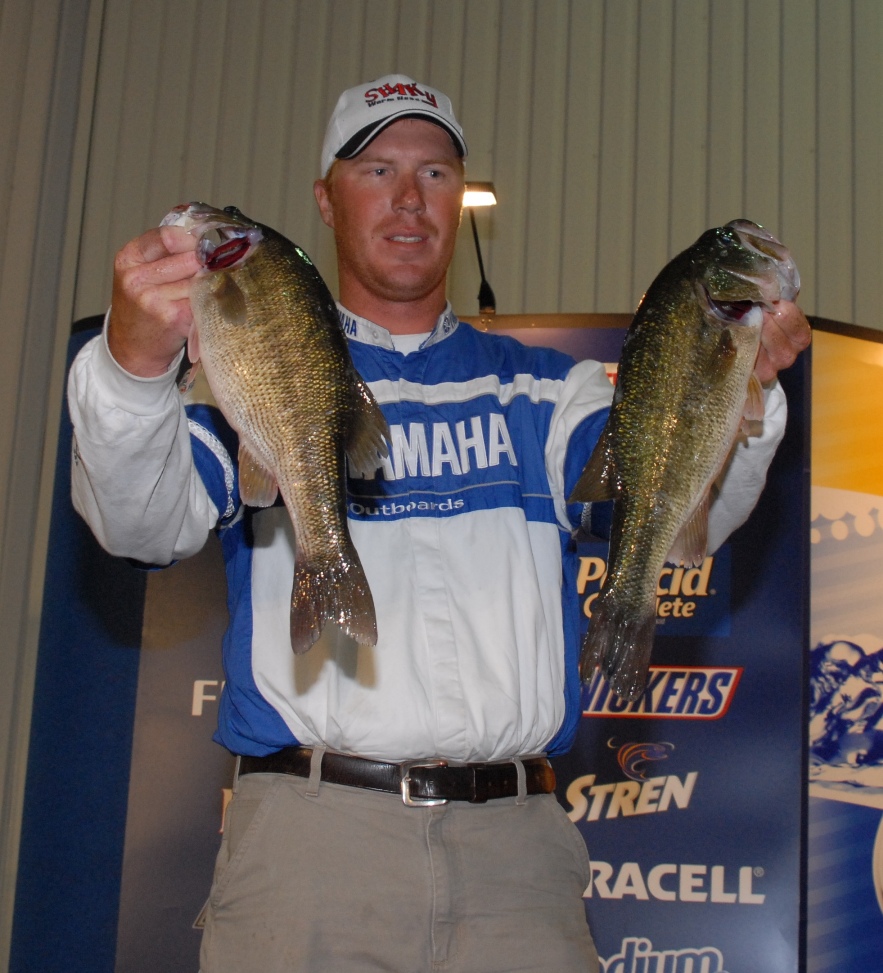 Greg Vinson of Wetumpka, Ala., leads the Stren Series Championship going into the final round with a two-day total of 23-2. Photo by Rob Newell. Angler: Greg Vinson.
November 9, 2007 • Rob Newell • Toyota Series

MOBILE, Ala. – Spotted bass continued to be the leading story at the Stren Series Championship in Mobile, Ala., after day two.

Greg Vinson of Wetumpka, Ala., who was in fourth yesterday, jumped into the lead today with a 12-pound, 3-ounce catch to give him a two-day total of 23 pounds, 2 ounces.

Behind him, Greg Bohannan (4th) and David Curtis (6th) are also fishing for spotted bass in current, while Bobby Lane (2nd) and Mike Jackson (3rd) are flipping matted vegetation for largemouths.

Vinson once again ran way north on the Alabama River today to catch a sack full of spotted bass, and on the way back, he got a bonus bass for being a nice guy.

“I was actually on the way back with about 9 or 10 pounds, and I wanted my co-angler to finish out her limit, so I pulled into a spot I’ve been saving,” Vinson recounted. “It’s a little backwater area that has some largemouth in it, and I caught a 4-pounder, which culled me way up.”

Coming into the Mobile Delta event, Vinson committed to the upper portions of the Alabama River for spotted bass because that’s the way he fishes back home.

“I fish the Alabama River and the Coosa River a lot for spotted bass,” he explained. “That’s really my comfort zone. I feel like I understand the current and cover relationship pretty well with spots, and I’ve found some places up the Alabama River that look identical to places I fish around Jones Bluff back home.”

Vinson says he has 12 key places, but two of them are better than the others.

“They’re mostly current breaks,” he said. “But the fish seem to replenish faster on my two best spots.”

Lane holds on to second 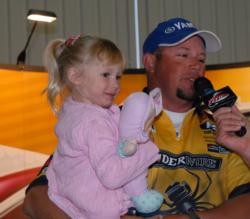 Lane’s red-hot area from day one slowed down quite a bit today, but it may have forced him to make a key move that could pay off big over the next couple of days.

“I only caught two fish from the spot where I caught them so fast yesterday, then I started to scramble around a bit,” Lane said. “At 1 o’clock I only had those two bass in the well, and I made a last-minute decision to run way up to a spot that I had kind of written off. It ended up being a great move, because I caught four bass up there pretty quick and culled once.”

Lane is fishing matted vegetation with a 1-ounce weight and a Berkley Chigger Craw.

“I’m focusing strictly on mats,” he added. “That place I went late this afternoon has quite a few mats with deep water underneath them, and there are a lot of those mats I haven’t even fished yet. So I’m pretty excited about the next couple of days, because I really don’t know what the potential is in there.” 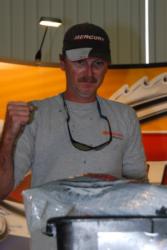 Mike Jackson of San Mateo, Fla., moved up a couple of spots to third place today with a two-day total of 18 pounds, 13 ounces.

Jackson, who fished all over the Delta yesterday, settled down into one place today.

“I had one area that produced two of my fish yesterday, and I went in there this morning and really spent some time on it,” Jackson said. “I stayed in there until I got my limit and then went and tried some other stuff. I’ll probably stay in that one area all day tomorrow; it seems to be the best spot I’ve got. Plus there is a lot of water in there that I have not even touched.”

Jackson reported that he is flipping matted vegetation in his primary area. 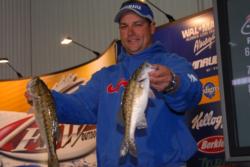 He once again journeyed far up the Alabama River to fish for spotted bass, but his bite slowed considerably.

“I didn’t have much at 1 o’clock, and between 1:30 and 2 o’clock, I pulled out a shaky head and caught my last two keepers, which really kept me in the game,” Bohannan said. “But overall it was tougher than yesterday. That’s the way it has been in practice, though: One day they bite really good, and the next day is really slow, then the next day they bite again. So I’m hoping it’s back on tomorrow.”

Bobby McMullin of Pevely, Mo., rounds out the top five with a two-day total of 18 pounds even.

Rounding out the top 10 pros in the Stren Series Championship who will fish the final round: 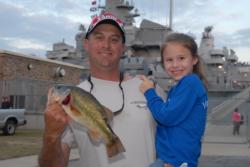 Chris Hults of nearby Vancleave, Miss., leads the Co-angler Division of the Stren Series Championship with a two-day total of 14 pounds, 3 ounces.

Hults, who fishes the Mobile Delta frequently, has been in his comfort zone the last two days.

“I fish here a good bit, and I’m good friends with Robert Robinson of Mobile (currently in 7th), who has taught me a lot about fishing over here,” Hults said. “Today I was able to point out some key areas to my pro based on my local knowledge, and it worked out. I’ve got a confidence bait I’ve thrown for two days – it’s a hard-plastic bait that I’m fishing very slowly.”

Hults is a little unsure about tomorrow, though.

“I know who I’m fishing with, and I don’t think he’s going to be in the same kind of water I’ve been fishing the last two days, so I’m pretty nervous,” he added.

Ray Peace of Arlington, Texas, is in second place in the Co-angler Division with a

“By coincidence I ended up fishing in the same creek today as I did yesterday,” Peace said. “So I had a lot of confidence going into the day. I stayed with a little Texas-rigged worm that I fished yesterday and just got five bites all day.”

Bo Middleton of Elgin, Okla., is in third place with a two-day total of 11 pounds, 13 ounces.

Teddy Bradley of Mishawaka, Ind., is in fourth place with a two-day total of 11 pounds, 5 ounces.

Young Yang of Los Angeles is in fifth place with a two-day total of 11 pounds, 3 ounces.

Rounding out the top 10 co-anglers in the Stren Series Championship who will be fishing the final round:

The top-10 cut has been made. The top 10 pros and 10 co-anglers will take to the water Saturday morning for day three of the Stren Series Championship beginning at 7 at the Chocolotta Bay Ramp, located at 1595 Battleship Parkway in Mobile.