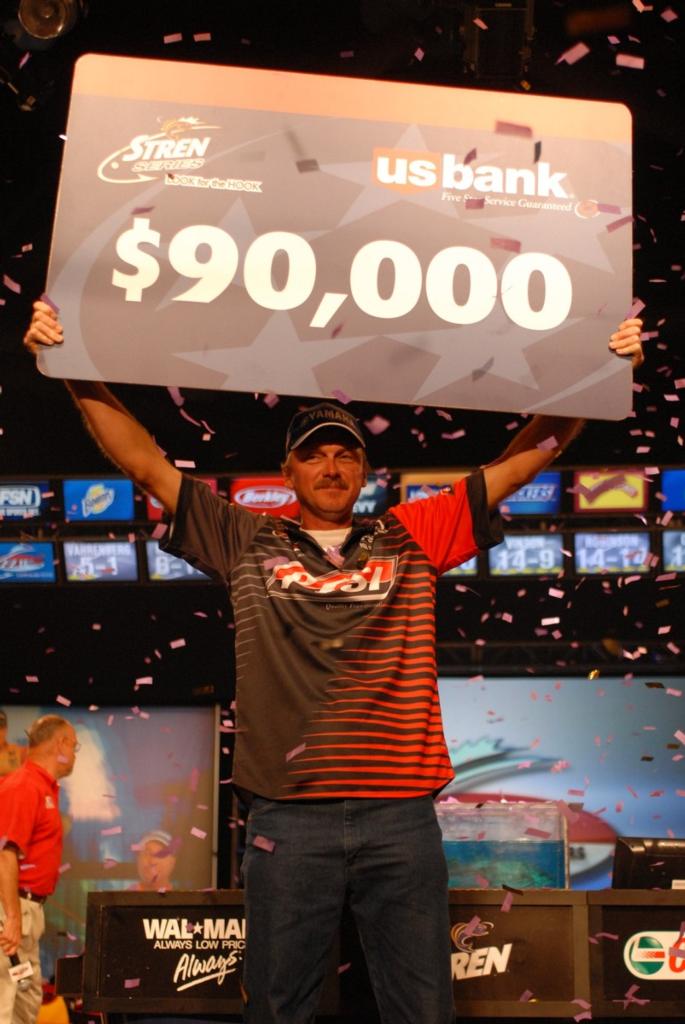 MOBILE, Ala. – Pros fishing the 2007 Stren Series Championship on the Mobile Delta ran far and wide this week to find fish in places that were several area codes away.

Several pros who ended up in the top 10 were running 220 miles per day – almost 1,000 miles over the course of the week.

Others were easily covering 80 to 120 miles per day to get away from the Delta and into the current flows of the Alabama and Tombigbee Rivers.

Which makes it all the more ironic that Mike Jackson of San Mateo, Fla., won the Stren Series Championship in downtown Mobile, Ala., almost within sight of the Arthur R. Outlaw Convention Center – the very place where he weighed in 18 pounds, 1 ounce of winning bass over the last two days to pocket $50,000 cash plus a fully rigged Ranger boat.

And no one was more surprised than Jackson himself, a Stren Series rookie who qualified for the championship through the Southeast Division.

“I’m speechless,” Jackson said with a bewildered look as confetti fell around him in the victory ceremony.

Each day of the event Jackson traveled no more than just a few minutes from the takeoff location near Battleship Park into the shipping channel along downtown Mobile and back into Three Mile Creek.

Even more amazing is how Jackson found the spot.

“I have a marine construction business on the St. Johns River,” Jackson explained. “I build big docks and stuff, and I was actually riding around over there on the downtown Mobile water front, admiring all those big cranes and barges and stuff, when I noticed a tiny piece of water hyacinths floating in the water near this canal.

“So I started following the canal back, went under a couple of bridges and started seeing all this floating trash in the water – bottles, cans, basketballs, volleyballs, you name it – just big mats of junk. But the trash had mats of hyacinths and vines trapped in it.” 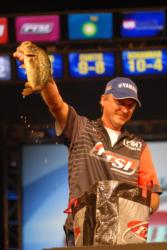 Jackson immediately pulled out a flipping rod and began punching the matted junk.

“I caught 15 pounds of bass from under one mat in practice,” Jackson iterated. “And the funny part is I didn’t even bring any of my good flipping stuff over here – I left it at home because I didn’t think I would be fishing that way.”

Jackson scoured his boat and truck and found a few 1 1/2-ounce tungsten flipping weights, a bag of Reaction Innovations Sweet Beavers, a bag of Gambler 4-inch craws and a bag of Culprit craws in the far recesses of his boat, using up every bit of flipping tackle he had to win the tournament.

He tied his mat-punching rig to 80-pound Spiderwire braid.

“The water in there was real clear,” he said. “But that matted junk was so thick, I don’t think the line size mattered.”

Though Jackson caught his fish in a couple of other places during the week, he estimated that 90 percent of his fish came out of the small creek running through downtown Mobile.

In addition, Jackson has also earned a berth into the 2008 Forrest Wood Cup for a shot at winning a possible $1 million top prize. (For more on the other Forrest Cup qualifiers from the Stren Series Championship, see the day-four Quick Bites.) 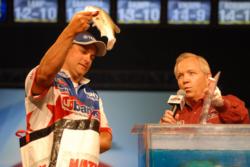 Red-hot Greg Bohannan of Rogers, Ark. – who has had a remarkable 2007 season, which included a Stren Series win at the Columbus Pool and a Central Division Angler of the Year title – finished runner-up in the championship with a two-day total of 16 pounds, 1 ounce, worth $35,750.

Each morning, he started his day with a 65-mile run up the Alabama River where he had located several deep river bends consisting only of slick clay banks.

“I was looking for two things: fast water and bait,” he said. “And I found those two items on the slick clay banks. I was not fishing wood or laydowns. The key features along those banks were small natural knobs or points on the bank. Shad would ball up in the small eddies formed by those knobs and points, and the spotted bass were onto it.”

“I was paralleling the banks, trying to get my crankbait as close to the bank as possible to bump the points,” he said. “The crankbait worked better when the current was really flowing well. When the current slacked off like it did today, I had to go to a War Eagle shaky head, which is what I caught three of my keepers on today.”

David Curtis of Trinity, Texas, finished third with a two-day total of 16 pounds 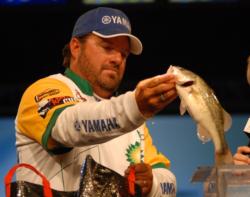 Curtis was one of the pros making the 110-mile run up the Alabama River where he was fishing an outlet pipe from a paper mill.

“That pipe is constantly flushing out current, 24-7, so fish live around it all the time,” he said. “And I was just throwing a green-pumpkin Zoom Trick on a Gigi-Head on 8-pound-test line.” 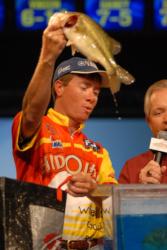 Robinson spent his week up the Tombigbee River up to mile marker 54.

“The key baits for me this week were a Bagley’s Killer B III crankbait in a splatterback pattern and Zoom lizards in Junebug and redbug colors,” Robinson said. “I was making short casts to big blowdowns and root balls on the main river that had current on them. That was the key for me, fishing the objects that had the most current flow.”

Greg Vinson of Wetumpka, Ala., finished fifth with a two-day total of 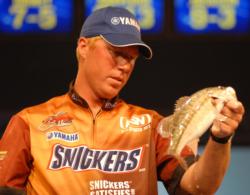 Vinson was also making the long run up the Alabama River and fishing the same discharge pipe that Curtis was fishing.

“I would start on that pipe each morning, catch a couple of keepers, and then move up and fish the dam as well as several isolated wood piles up there that were blocking current.”

Rounding out the top 10 pros in the Stren Series Championship in Mobile: