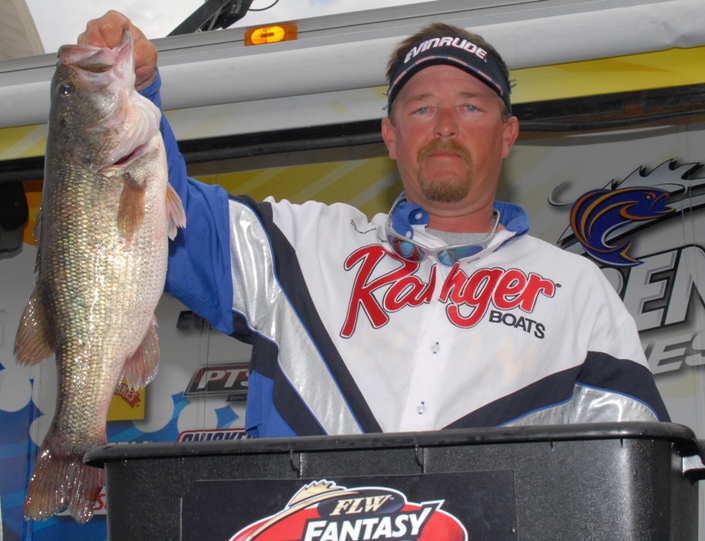 EUFAULA, Ala. – If you live in the vicinity of Alabama or Georgia and want to have some fishing fun in the next couple of weeks, consider hooking your boat up and heading to Lake Eufaula.

As proven on day three of the Stren Series event on Eufaula, this is spring time bass fishing at its best on the Alabama/Georgia border.

You won’t need any fancy lures or expensive new-fangled baits, just take your favorite spinnerbait or jig, pull into a grassy pocket and start fishing.

And if you don’t believe it, take it from the man leading the Stren Series event, Travis Adams of Danielsville, Ga., who has amassed a three-day total of 47 pounds, 13 ounces fishing shallow.

Adams checked in his best limit of the week – 18 pounds, 1 ounce – today to take the lead.

“It’s classic springtime fishing,” said Adams. “I’m just going down the bank throwing a 3/8-ounce spinnerbait – nothing fancy. I’ve got two or three key areas where I’m starting each day, but after that I just start running new water. In fact, the place where I caught my biggest bass today, I have not fished before.”

“Some of them are coming off grass, some off wood,” Adams added. “There’s no rhyme or reason to it, it’s just a lot of fun.”

Tomorrow’s final weigh-in should be exciting. Adams’ has just a slight 5 ounce lead over second place and he’s sharing his run and gun pattern with most of the other top-10 finalists. 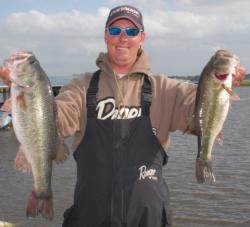 second place today with a catch of 14 pounds, 3 ounces for a three-day total of 47 pounds, 8 ounces.

“Man, this is just fun fishing,” said Browne. “The weather is warming up, the lake has finally stabilized and new fish are moving up by the hour. They are new fish fresh off the lake and they are mean. When you hook one, it’s like it’s got a rocket tied to it.”

Browne is fishing with heavy artillery in grass: spinnerbaits, Chatterbaits, a ¾-ounce jig and even a buzzbait.

“I had one just demolish a buzzbait today – that was fun,” he continued. “And I had a couple thump that big jig along some deeper grass edges. There are so many fish moving up that you can fish right behind guys and still catch fish. And I don’t mean that like they’re fishing over them; I really believe that as soon as a bass is caught, another moves up there and takes its place.” 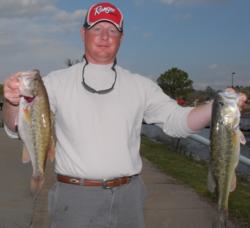 Offshore ace Ryan Ingram of Phenix City, Ala., refuses to give up his third place spot. He’s held the position all week and retained it today with a three-day total of 46 pounds, 14 ounces.

Ingram also refuses to be shot down by the bank beaters. He continued to fish deeper offshore edges today with a ¾-ounce Strike Zone Master Blaster spinnerbait.

“I did actually go up and fish shallow for about 20 minutes today out of pure desperation,” Ingram laughed. “I only had one keeper at 1 o’ clock and my co-angler recommended that we go up and fish a few of those bean bushes. So we went up there and I caught my biggest fish of the day. Then I left it and went back out offshore to finish my limit.”

Randall Tharp of Gardendale, Ala., had the best day of his week on Eufaula today, 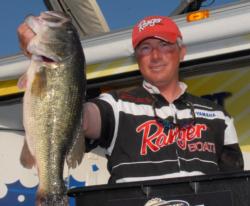 weighing in a limit for 17 pounds, 10 ounces for a three-day total of 46 pounds, 12 ounces to move into fourth place.

Tharp started the week sight-fishing on the lower end and he felt that pattern was going away, so this morning he attacked with a whole different game plan.

“I caught my fish pretty quick sight-fishing yesterday and I noticed that there were no new ones moving into my area during the afternoon,” he said. “Plus some other boats started moving into the area and I knew that I was going to have to do something different today.

“So I scratched my sight-fishing deal and went up the river with a spinnerbait and it turned out to be the right move.” 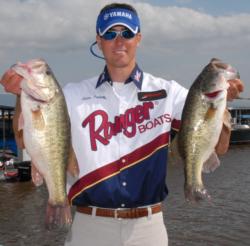 Adam Postelle of Rocky Face, Ga., holds down the fifth place position with a three-day total of 46 pounds, 3 ounces.

“I’m going down the bank fishing anything that gets in my way: grass, wood, docks, bushes,” Postelle said. “I’ve got a little milk run I start out with then I explore new water to see if I can find something to add to my milk run for the next day.”

Rounding out the top-10 pros in the Stren Series Southeastern after day three:

Alan Hults of Gautier, Miss., leads the Co-angler Division of the Stren Series event on 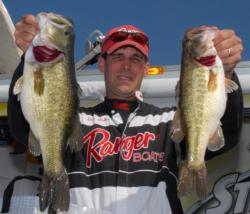 Lake Eufaula with a three-day total of 34 pounds, 13 ounces.

He caught his best limit of the week today – 15 pounds, 13 ounces – which put him in the lead.

For those who Hults, this comes as no surprise. He has amassed six top-10 finishes in Stren Series competition over the last two years. In short, get Alan Hults around a bass and he’s going to catch it.

“I found a little area in practice that I have a tremendous amount of confidence in,” said Hults. “The last two days I’ve been able to convince my pro partners to go there and that’s where I’ve caught my best fish.”

Hults is fishing a mixture of shallow-running crankbaits, Chatterbaits and swim jigs to catch his fish, but he maintains that it’s the area that’s been key.

“It’s more the area than the baits,” he added. “We caught some good fish in there in practice and I know there are more living in there.”

Matt Smith of Southport, Fla., in is third place with a three-day total of 31 pounds, 4 ounces.

Daniel Beckham of Lake City, Fla., is in fourth place with a three-day total of 30 pounds, 8 ounces.

Roger Mason of Heflin, Ala., rounds out the top 5 with a three-day total of 29 pounds, 14 ounces.

Rounding out the top-10 co-anglers in the Stren Series Southeastern on Lake Eufaula after day three:

Day four of the Stren Series Southeastern on Lake Eufaula will begin at 7 a.m. at Lakepoint State Park on Saturday.