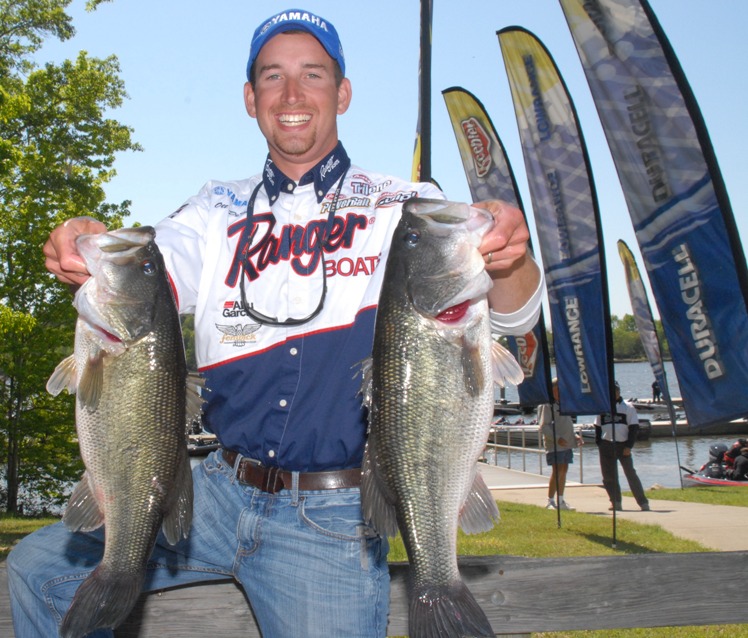 MANNING, S.C. – The water is back up at Santee Cooper, and so are the bass. Anglers fishing the Stren Series Southeast event on lakes Marion and Moultrie today were graced with decent springtime fishing conditions, and the results showed by the number of 20-pound limits that crossed the stage.

In all, 15 bags of bass in the 20-pound-plus category were hauled in by pros, and 21 pounds, 3 ounces currently stands as the top-10 cut weight in the Pro Division.

OK, so it’s not Falcon Lake or Clear Lake, but considering Santee Cooper was a parched dust bowl just a few months ago, it’s good to see the big bass still know their way around Santee’s shallows.

Cypress trees and sight-fishing figured heavily into the day-one leaders’ patterns – no surprises there.

Leading the event after day one is Ott Defoe of Knoxville, Tenn., with a five-bass limit weighing 27 pounds, 14 ounces.

A young gun in FLW Outdoors events, Defoe is always wearing a smile, but today his grin was especially grand.

“That’s the biggest limit I’ve ever weighed in a tournament,” he revealed. “So it was a pretty special day. I figured I had well over 20 and was already excited about that; then I made one of those blind-luck casts to nothing in particular and caught a 7-pounder – what a blessing.”

Defoe did sight-fish one 5-pounder off a bed, but the rest he caught blind-casting a Berkley 7-inch Shaky Worm tied to 8-pound-test Trilene 100% fluorocarbon to places where he knew fish were bedding from practice.

“There are bedding fish in the area, but I’m not actually looking at them,” Defoe confirmed. “I think some are guarding fry as well; the 6 1/2 (-pounder) I caught came from under a big ball of fry.” 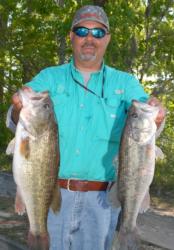 Costas used to live on Santee and knows her waters well. In all, he boated seven keepers today.

“I caught one off a tree, and the rest came from shallow stumps and grass,” he said. “I’m mostly throwing soft plastics – a Trick Worm – and I did catch a fish or two off a crankbait.”

Costas predicts that when the wind calms in the next couple of days, more big bags will be weighed.

“This is the land of giants,” he said, “and you never know what tomorrow will bring.” 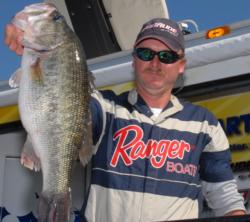 Jackson’s limit was anchored with an 8-pound, 4-ounce lunker that he caught off a bed.

“When I first saw her, I thought she was about 5 pounds,” Jackson recounted. “So I spun the boat around, got set up right and started working her. It took a while. She kept snapping and blowing at the bait, and finally she just engulfed the whole thing. I really had no idea how big she was until I got her in the boat.”

Jackson sight-fished the rest of his limit as well, culling three times in the process.

“Hopefully more will keep moving up with this full moon,” he added. “If the wind would lay and we could fish in some of these other places where it has been blowing, there’s no telling what you might see these guys weigh in here the next couple of days.”

Michael Brown of Rocky Face, Ga., is in fourth place with 22 pounds, 14 ounces. 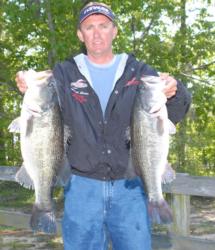 “I got to my best spot this morning, made a couple of passes and never had a bite until 10:30,” Brown iterated. “I almost panicked and bailed on it, but I decided to make one more pass, and it was like someone hit a switch and they just started biting. It’s amazing what just a couple of degrees in water temperature will do.”

Brown noted that he is fishing cypress trees with a weightless Senko.

“I’m making long casts, skipping the bait under trees with braided line on a spinning rod,” he added. “And when one of those big ones gets it, I just hang on for the ride.” 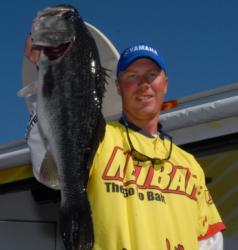 Greg Vinson of Wetumpka, Ala., holds down fifth place with 21 pounds, 13 ounces.

Vinson’s five-bass limit was anchored down with the day-one Snickers Big Bass of 8 pounds, 5 ounces.

Vinson, too, is sight-fishing. He caught the big female off a bed after finding her earlier in the day.

“She was a new fish, because I did not see her in practice,” Vinson explained. “I found her at about 11 o’clock, but she was not ready. I fished for her for a few minutes, but she would not settle down. So I took a gamble and left her to go check some other stuff. When I returned a couple hours later, she was locked down on the bed and ready to bite. In fact, she bit before the buck did. I thought she was 6 or 7 pounds when I found her. I had no idea she was that big.”

Rounding out the top 10 pros in the Stren Series event on Santee Cooper after day one:

Larry Breckenridge of Dothan, Ala., caught a five-bass limit weighing 18 pounds, 2 ounces to 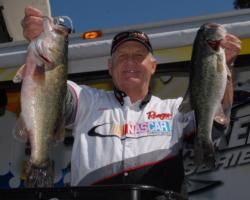 take a dominating lead in the Co-angler Division after day one.

Breckenridge said he caught his two best bass slow-rolling a spinnerbait over a long point. He said he also caught fish on a swimbait as well as a green-pumpkin lizard.

“I got lucky and drew a local guy who was a good fisherman,” said Breckenridge, who is fishing his second season of Stren Series competition. “We weren’t on a pattern. We were just catching them. I had five bites and got lucky and caught all five of them.”

Jason Ober of Johnstown, Pa., is in third place with five bass for 12 pounds, 3 ounces.

William Combs of Villa Rica, Ga., is in fourth place with five bass for 11 pounds, 14 ounces.

Delane Harrison of Cottondale, Ala., rounds out the top five co-anglers with two bass for 11 pounds, 12 ounces.

Rounding out the top 10 co-anglers in the Stren Series event on Santee Cooper after day one:

William Pickle of Jasper, Ga., caught the big bass in the Co-angler Division on day one weighing 8 pounds, 2 ounces.