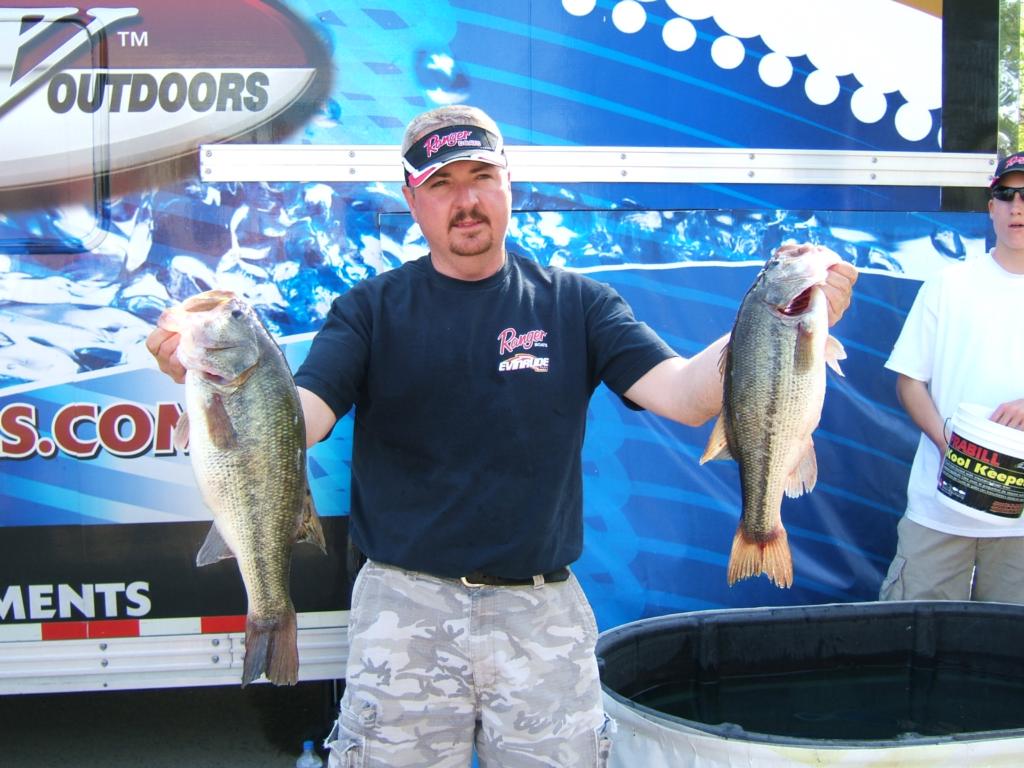 BENTON, Ky. – This week’s Stren Series Central Division event on Kentucky Lake was expected to be a bit tougher than usual, but competitors proved there are plenty of fat fish to be found, as the leading pro caught 19-12 and the leading co-angler busted out 18-2, a weight that would have had him in third on the pro side.

Prespawners and spawners are the name of the game this week on Kentucky-Barkley, and Ryan Chandler of Hobart, Ind., currently holds the top spot on the leaderboard with the aforementioned 19-pound, 12-ounce limit. That edged him past college student Michael Wooley, who ended day one in second with a limit weighing 18-6.

Chandler is no stranger to Kentucky-Barkley success, having racked up four top-10 finishes since 1997 in Wal-Mart Bass Fishing League and Wal-Mart FLW Tour competition. Today he pointed his rig south to collect his leading limit.

Despite his early troubles, Chandler locked on to a good spot that ultimately yielded his big bag of fish, including a 5-pounder he caught with five minutes to go.

“I’m fishing for prespawners,” Chandler said, adding that he’s catching them on Barkley Lake. “I’m fishing pretty deep for them. I think the next two days it’s going to change, but I think I can catch them shallow.”

What Chandler would not mind changing is the wind, which blew hard enough to convince him to leave his sweet spot to ensure he would make it back in time for weigh-in.

“(The weather) is going to affect me a lot if the wind keeps blowing, as far as getting there and getting back,” he said. “I left at noon today and hopefully left a few down there.”

Taking the No. 2 spot behind Chandler is 21-year-old Michael Wooley of Collierville, Tenn., with a five-bass limit weighing 18 pounds, 6 ounces. Wooley, too, is no stranger to competition and, according to his dad, has been fishing professionally since he was 16. He is currently a full-time college student. Today, though, he schooled most of the 198-boater field, bringing in one of the day’s most impressive stringers that included a 5-pound, 3-ounce kicker.

“It was spectacular,” Wooley said of day one. “It couldn’t go wrong. I’m fishing extremely shallow and catching a lot of bedding fish.”

Wooley said he’s been practicing for four or five days but has been fishing Kentucky-Barkley for 15 years, so he certainly knows his way around these particular ponds. That knowledge definitely helped him today.

“In practice I figured out what they were sitting on,” he said, adding that he’s running 65 to 70 miles south on Kentucky Lake to catch his bass. “(My pattern) will be working tomorrow. I fished for 45 minutes on it this morning and took off.”

In the third spot is Nate Wellman of Jenison, Mich., with a day-one haul of five bass weighing 17 pounds, 1 ounce. Like Wooley, Wellman was enthusiastic about his prolific day one.

“It started off with a bang,” he said. “We went down this one bank, and I missed a bite, so I picked up a Brush Hog and not two casts later caught the big one. All my fish moved. They went from the pea gravel to the chunky stuff. It was definitely a bait and color thing today.”

Wellman said he is fishing the north end of the lake, making only about a 20-mile run, and figures his positioning may have to change if the wind predictions hold true.

“The wind is going to blow out of the south,” he said. “I may have to abandon my areas.”

Weast, Colson round out top five

Taking fourth on day one is Jason Weast of Camdenton, Mo., with a limit weighing 16 pounds, 14 ounces.

“It went great for about an hour, and the rest of the day went horribly,” Weast said. “The clouds disappeared, and the fish suspended. We couldn’t keep up with them. We were fishing a drop, and they were up shallow feeding. We hit the right spot at the right time. I didn’t think I was going to do that well today.”

Perennial Kentucky-Barkley contender Ramie Colson Jr. of Cadiz, Ky., ended the day in fifth with 16 pounds, 10 ounces. Colson has 18 top-10 finishes on these lakes since 1995, including two wins.

Rounding out the top 10 pros on Kentucky-Barkley after day one:

Tops in the co-angler field is Joey Rogers of Mayfield, Ky., with a five-bass catch weighing 18 pounds, 2 ounces that edged him past the No. 2 co-angler by a 2-pound, 4-ounce margin. Sweetening the deal for Rogers was the presence of his mom and dad, who surprised him with their first weigh-in appearance. Rogers’ big limit included a 5-pound, 10-ouncer that won the day-one big-bass award on the co-angler side.

“We got our limit by 9:30, and that big fish was my third fish,” he said. “We were working gravel banks with deep water close by, fishing really slowly.”

Rogers and his day-one partner, Kenneth Woods, made about a 40-mile run to Barkley to catch their fish. A local, Rogers is currently ranked 18th among co-anglers in the BFL LBL Division that mainly competes on this fishery.

In second on the co-angler side is Joe Waggoner of Carthage, Mo., with a day-one catch of five bass weighing 15 pounds, 14 ounces. Waggoner had a productive morning, catching all of his bass by noon.

“I had a really awesome day,” he said. “I had four fish off the first spot, including two big fish. We sat there three hours, and I had my fifth keeper at noon, and I put everything up.”

Waggoner caught his bass dragging a Carolina rig and caught one good fish today on a crankbait. He expects his methods to hold up with new partners the rest of the week.

Taking the third spot on the co-angler side is Michael Radake of Cape Girardeau, Mo., with a limit weighing 15 pounds, 11 ounces. His sack included a 5-pound, 3-ounce kicker fish.

“I was fortunate to get the bigger bites, and I caught them all shallow,” he said. “I think it will work (tomorrow). It seems like they were hitting specific baits, so hopefully they’ll hit the same ones tomorrow.”

Radake and his partner, Bruce Dale, fished Barkley Lake today for their bass.

Heltsley, Futch round out top five

In the fourth position is co-angler Roger Heltsley of Greenville, Ky., with a four-bass catch weighing 14-13. Two anglers tied for fifth, with Brian Futch of Goreville, Ill., and Lonnie Seawood of Hamtramck, Mich., both bringing in 13-pound, 11-ounce limits.

Rounding out the top 10 co-anglers after day one on Kentucky-Barkley:

Day two of the Stren Series Central event on Kentucky-Barkley will begin Thursday at 6:30 a.m. from Moors Resort, located on Moors Road in Gilbertsville, Ky.