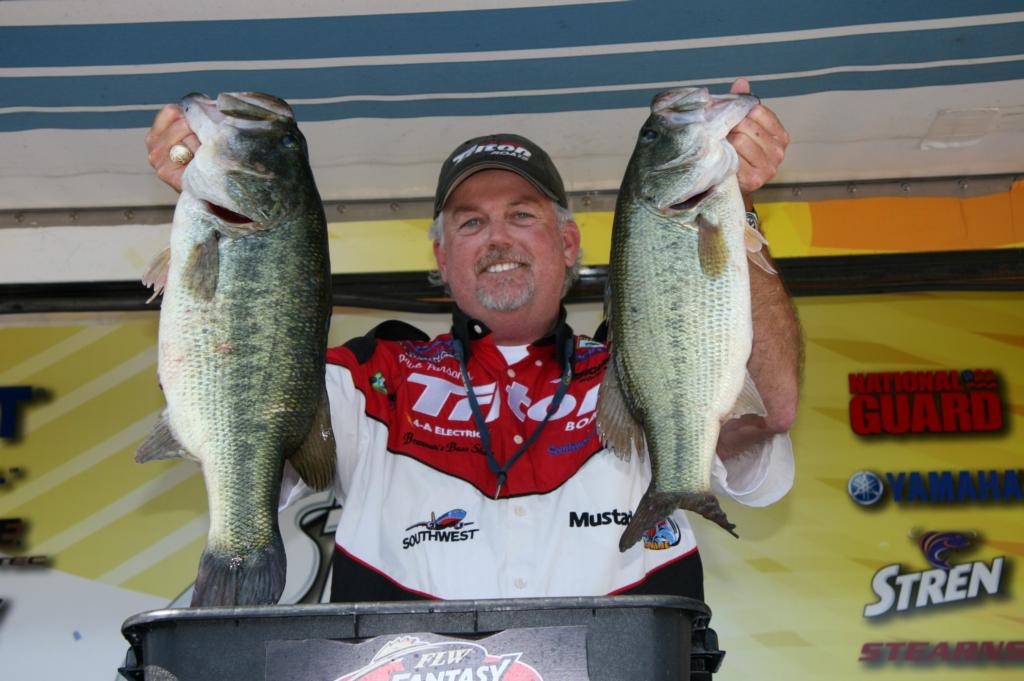 Parsons placed 33rd on day one with 11-8, but now owns a 32-10 total and a 3-pound, 8-ounce lead. Icing that cake, Parsons captured the Snickers Big Bass award for his 7-pound, 11-ounce largemouth.

“On this lake, for the second day, it’s really awesome,” Parsons said. “I caught my two biggest ones back-to-back, the last two fish of the day.”

Parsons caught his fish by cranking and flipping around rocks, docks and off-colored water in four to seven feet. He’s keeping his bait selection on a need-to-know basis for now, but he said Parsons said he had identified a particularly effective flipping bait during practice and he has stuck with that during the first two days of the tournament.

A solid game plan based on diligence gives Parsons a confident outlook for day three. “I didn’t get a lot 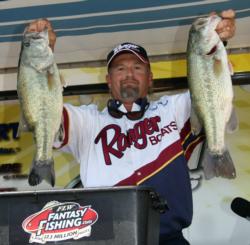 of bites today, but if I just keep my head down and keep fishing, I think I can do five a day.

“I caught a lot of fish yesterday in a whole different area and I have two different areas that I haven’t even gone to yet. I planned it out so I could move around, because that’s what you have to do in this lake. If you beat your fish up one day, you can’t go back to them the next day. My strategy is working so far, I just hope I can keep it up.”

Anglers launched into a cloudy and moderately windy morning that would yield to hot and nearly still conditions by midday. A subtle, yet telltale sign of vastly different weather was the canopy covering the day two weigh-in line. The covering was not erected on day one – mostly because there was no need for sun shelter, but also because the gusty winds would have blown it into the marina. 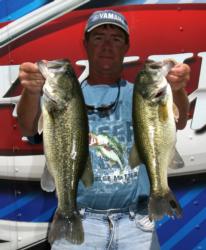 By lunch time on day two, the wind speed and the thermometer were headed in different directions. Anglers reported varying affects – some, like Parsons simply hunkered down and grinded out their patterns, while others said the bluebird skies and lack of wind killed their action. The day three forecast calls for more sunshine and not much wind, so the challenge continues.

In second place, Tim Harp also made a big move – up from 17th on day one with a 15-14 limit that raised his total to 29-2. Working spinnerbaits around docks kept him in the fish. The blades of a spinnerbait imitate the spawning shad that a lot of Texoma bass are targeting, but Harp said it’s more about grabbing a fish’s attention in low visibility.

“The water’s so murky you have to have something that will get their attention,” he said. “You can’t just 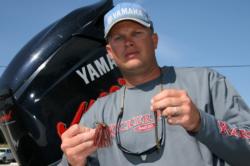 pitch in there and catch one. You have to have something shaking or vibrating to get his attention, because he won’t move if you don’t.”

A slow rolling retrieve was essential. “You can’t burn it by them and get them to react. You’ve got to keep it right on top of them and give them something they can react to.”

Fishing north of launch site, Harp said he stayed busy, looking for active fish around docks, rocks and wood. The early bite was best. “We moved around a lot today. We probably burned 20 gallons of gas. We caught them better this morning when those clouds were up, but once the sun came out and the fish got really tight to the cover and they didn’t want to come off.”

Mobile, Ala. pro Robert Robinson added 13 pounds to his day-one score of 15-8 and retained his third-place spot with a 28-8 total. Cody Martin of Taylor, Texas slipped two spots to fourth place with 28-2, while Chris McCall of Jasper, Texas rose three notches to fifth with 27-9.

Hard to tell Bobo’s a rookie 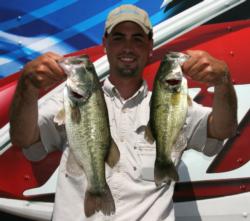 So far, he caught the biggest co-angler bass of day one, made the first day’s top 10 with only three fish and now leads his division with a two-day total of 21-5. Oh, and this is Chris Bobo’s first FLW tournament.

He could stop there and go home with a fine effort in his maiden voyage, but there’s no way the 22-year-old Sherman, Texas angler is going to miss out on the opportunity to increase his knowledge while fishing for a lot of money. Bobo said that he has already grown through his FLW experience.

“As a co-angler, you really get to watch your pro and they didn’t get the pro status for nothing,” he said. “If you really pay attention, they can teach you something every day. If they give you a lead – take 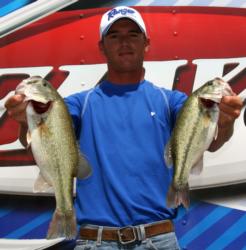 it, because they are going to put you on something.”

Paired with Robinson, Bobo stuck with a spinnerbait all day. He said that Robinson’s calming advice helped him through the psychological part of the game. “He said `Just get rid of those jitters. Just calm down, take it one cast at a time and keep that lure in the water’.”

George Coffman of Marlow, Ok remains in the second-place spot with 20-15. Moving into third is Bo Middleton, the Elgin, Ok. angler who improved from 15th on day one with 19-9. (Middleton won the 2007 Stren event on Lake Texoma.)

Stephen Francis of Brookeland, Texas placed fourth with 18-15 and Dan Wilson of Pilot Point, Texas was fifth with 17-13. 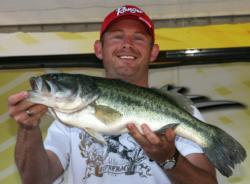 Jason Pittman of Ardmore, Ok. caught the largest co-angler bass – a 6-pound, 6-ounce largemouth – while flipping a white jig around a dock. “I caught that fish with five minutes left to go (before check-in).”

Rounding out the top-10 co-angler leaders at the Stren Series Lake Texoma event: