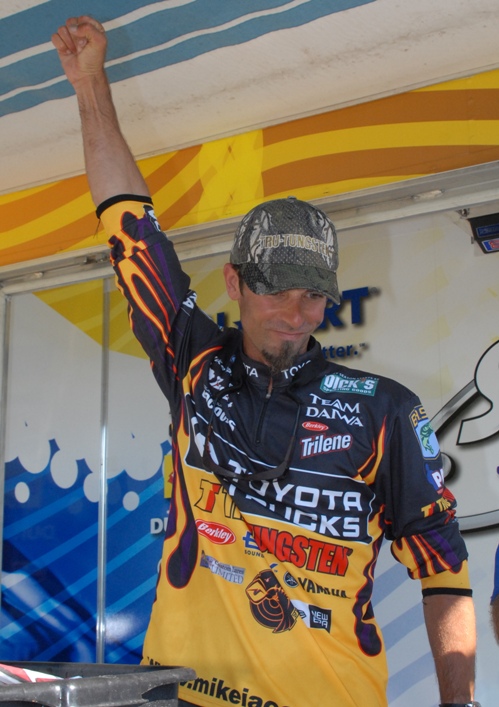 HENDERSON, N.C. – As predicted, things got a little stingy on day two of the Stren Series event on Kerr Lake.

The number of five-bass limits on the pro side dropped from 26 on day one to 17 today. And the number of limits over 10 pounds – 21 yesterday – fell to just 11 today.

The biggest stringer of day two belonged to Michael Iaconelli of Runnemede, N.J., weighing in at 14 pounds, 11 ounces, which allowed him to take the overall lead with 26 pounds, 7 ounces.

Ike is fishing shallow and covering a lot of new water each day – a key component to his pattern.

“The good thing that happened today is I got a decent limit by 12:30, and that let me go practicing and find some new water this afternoon; that’s a luxury you don’t get often on a tournament day.”

The New Jersey pro is only repeating water early in the morning with schoolers, and then it’s all new water from there.

“The first hour of the day I’m fishing for schoolers, and I’ll stay in one area working it back and forth, but after that, I’m fishing all new water,” Iaconelli said. “I’m fishing isolated stuff up shallow, and those fish just don’t replenish real well, so it’s best to keep moving.

“Practicing today allowed me to find some new water for tomorrow that fits my pattern, so I’m pretty excited,” he added. “It feels good when you get comfortable with one bait and start to develop that sense of what to look for, and that’s what happened today.”

second place today with four bass for 7 pounds, 13 ounces for a two-day total of 22 pounds, 9 ounces.

“I got saved at the last minute today,” Wilks recalled. “I only had one bass at about 3 o’clock and caught three in a matter of 10 minutes – that saved the day.”

Wilks revisited his primary area this morning and lost a couple of bass before venturing on to new water.

“I’ve got some decisions to make for tomorrow,” he added. “I don’t know if I should go back and start where I’ve been starting or just go fish all new water.”

Matt Greenblatt of Palm Beach Gardens, Fla., jumped into the third-place spot today with a limit weighing 13 pounds, 5 ounces, which gave him a two-day total of 22-7.

Greenblatt is on the shallow-water, covering-new-water game plan as well.

“My pattern is holding up pretty well,” Greenblatt explained. “I’ve got two rods on the deck, and I’m bouncing around, hitting a lot of places in one day. I probably hit 30 or 40 places today; I give each spot only 10 or 20 minutes, and then I move on. And once I fish a stretch, I don’t return. I didn’t fish any of the water today that I fished yesterday.”

John Voyles of Petersburg, Ind., is in fourth place with a two-day total of 22

“I had a better day today,” Voyles said. “Yesterday I caught about eight keepers; today I had more like 10 or 11 keepers, so it got a little better.

“I’m pretty much fishing three places, all pretty close to each other,” he continued. “It’s a spot-on-a-spot kind of deal. I’ve found some other places that have the right ingredients, but I can’t seem to find that sweet spot on those places. But the three places I have, I’ve found the exact spot on the spot to target, and it makes a huge difference.”

Kurt Dove of Fairfax, Va., rounds out the top five with a two-day total of 21 pounds, 2 ounces.

Rounding out the top 10 pros in the Stren Series event on Kerr Reservoir after day two:

Moo Bae of West Friendship, Md., has taken command in the Co-angler Division with a two-day total of 18 pounds, 11 ounces.

On day one, Bae weighed in a limit for 9 pounds, 15 ounces. Today he only caught two fish, but one of them weighed 5 pounds, 12 ounces, which qualified as the day-two Big Bass.

“I caught the big one on a finesse bait,” Bae said. “It was my first fish of the day, which was pretty exciting.”

Adam Straub of Pittsburgh, Pa., is in second place with a two-day total of 17 pounds, 8 ounces.

Jerry Hayden of Charlotte, N.C., is in third place with 17 pounds even.

Billy Carroll of Fayetteville, N.C., is in fourth place with 16 pounds, 3 ounces.

James Richardson Sr. of Harrison, Pa., rounds out the top five in the Co-angler Division with 15 pounds, 1 ounce.

Rounding out the top 10 co-anglers in the Stren Series event on Kerr Reservoir after day two:

Day three of the Stren Series Northern on Kerr Reservoir will begin Friday at 7 a.m. from Satterwhite Marina located at 6470 Satterwhite Point Road in Henderson, N.C., at 7 a.m. each morning.