Largemouth bite continues to be top ticket at Table Rock 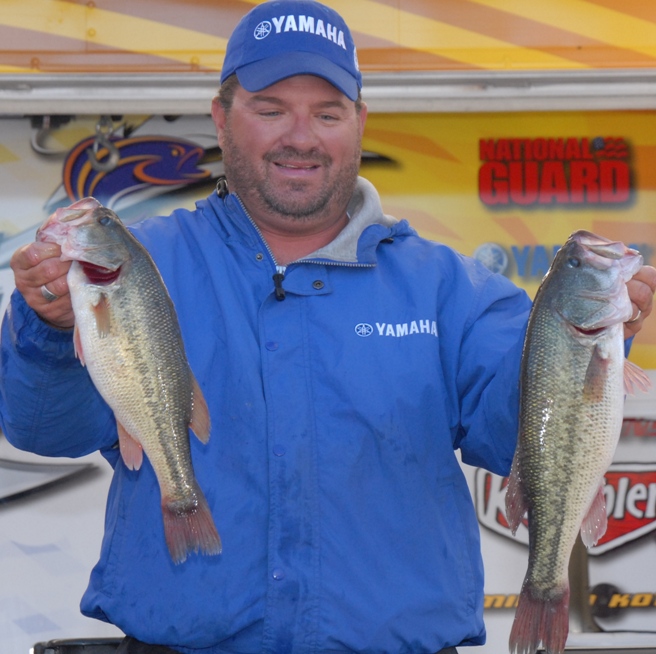 BRANSON, Mo. – Schedule a tournament in the Ozarks in the fall of the year and one thing is for sure: every day will be different in terms of weather.

The largemouth bass, however, continued to cooperate with the leaders. But as more details come to light on the leaders’ patterns, not all the largemouths are being caught shallow; some are coming from deeper waters as well.

Day-one leader David Curtis of Trinity, Texas, held on to his top spot today with a 13-pound, 2-ounce catch for a two-day total of 30 pounds, 3 ounces.

Curtis once again caught all largemouths today, but his shallower bite fizzled, and he had to dig deeper to find fish that would cooperate.

“It got a little tougher today,” Curtis said. “That shallow-water bite kind of went away, and my deeper spots were more of a factor.”

Curtis noted that over the last two days his three best largemouths have actually come deep.

The Texas pro is working two very specific deep-water spots and has two others similar to them that he has not visited yet.

“The places I’m fishing have some key stuff on them; they’re small areas, and I’m working them thoroughly,” he explained.

“I’ve only spent an hour on each spot the last two days. I’m trying to manage the fish the best I can. Since these places are deep, I’m more concerned about my own fishing pressure affecting them than the weather hurting them. So I’ve been taking just what I need of them and then leaving the areas alone.”

Lendell Martin of Nacogdoches, La., moved up from fifth to second today thanks to a

four-bass catch that weighed 15 pounds, 8 ounces. He had one less fish than yesterday, but weighed in a pound more in weight, giving him a two-day total of 29 pounds, 15 ounces.

Similar to Curtis, Martin is working both shallow and deep water for his largemouth bites.

“Yesterday I caught them pitching a jig to shallow lay-downs,” Martin said. “I caught two decent ones that way today, but the area I was fishing started to get a little crowded and I left.”

From there, Martin moved out onto deep points and began drop-shotting. That pattern produced two more quality largemouths.

“The last two days I’ve been starting shallow,” he added. “But tomorrow I might reverse the order of my water a little bit: start out deep and move shallow once the sun gets up and gets the shad moving to the warmer banks.”

Ott Defoe of Knoxville, Tenn., brought in 14 pounds, 5 ounces worth of largemouths today to move into third place with two-day total of 28 pounds, 6 ounces.

Defoe is doing what he likes best: cranking homemade crankbaits up shallow.

“My fish kind of spread out on me today, and I had to really expand my area to find them again,” Defoe said. “Yesterday I had it dialed down to a little 100-yard stretch of shallow water. Today I had to move around in the area a lot more to get my bites, and they were not as concentrated in one area as they were yesterday.”

Defoe added that he is worried that the falling temperatures the next couple of nights will have more of an impact on his fish than anything.

“There are plenty of fish in the area, I’ve seen them boiling around, so I’m not worried about pressuring the area as much as I am the weather affecting them.”

Bobby McMullin of Pevely, Mo., is in fourth place with a two-day total of

McMullin, too, is having better luck with largemouths than the other species.

“The fish I’m catching are up shallow, but they’re over deep water, sometimes as deep as 30 feet,” McMullin said. “The wind is a big key to how I am fishing. There has to be some wind to ruffle the surface to get the fish to bite. If it gets slick and calm the next two days, it could get a lot tougher for me.”

Ricky D. Scott of Van Buren, Ark., is now in contention for his second Stren Series Championship win with a two-day total of 25 pounds, 15 ounces for fifth place.

His 13-pound, 7-ounce catch today consisted of four largemouths and one spotted bass.

Scott is on a run-and-gun formula at Table Rock, hitting as many as 25 different spots in a day.

“I saw a lot of water today,” Scott said. “I’ve fished from the dam up the James River and over to the White River arm. I’m targeting specific trees or clumps of trees. Sometimes I don’t even put my trolling motor down. I just shut the big engine off and make a couple of casts while I’m drifting by the targets; them I’m off to the next one.”

Scott also noted that wind is a key to his success as well.

“I’m chasing the wind and sometimes the shade,” he added. “Today the wind shifted around a bit, and that forced me to fish some completely new places, but it worked out pretty well.”

Rounding out the top 10 pros in the Stren Series Championship on Table Rock Lake who made the cut:

Stephen Smith of Glenwood, Ark., retained his day-one lead in the Co-angler Division

of the Stren Series Championship on Table Rock.

Today he weighed in three bass for 6 pounds, 14 ounces to amass a two-day total of 19 pounds, 9 ounces.

“I caught everything on a jig today,” Smith said. “I’m pitching a ¾-ounce jig to any standing timber I can see. The heavier jig seems to work a lot better in this wind; I want to get it down there where they live.”

Local co-angler James Watson of Waynesville, Mo., is in second place with a two-day total of 18 pounds, 6 ounces.

Watson grew up fishing Table Rock and feels right at home. Some of the places his pros have taken him this week have given him a boost of confidence because he knows the areas so well.

“This time of year you really only need a few lures on this lake: a Wiggle Wart, a spinnerbait and maybe a jig,” Watson said. “Whenever my pros get me close enough to the bank to throw that Wiggle Wart or spinnerbait, my confidence goes sky high because I know I’m doing the right thing.

Shawn Murphy of Nicholasville, Ky., is in third place in the Co-angler Division with a two-day total of 15 pounds,

Tommie Goldston of Gardnerville, Nev., is in fourth place with a two-day total of 15 pounds.

Rounding out the top 10 co-anglers in the Stren Series Championship on Table Rock after day two:

Day three of the Stren Series Championship on Table Rock Lake will begin at 7 a.m. Friday at State Park Marina, located at Highway 165 S. in Branson.