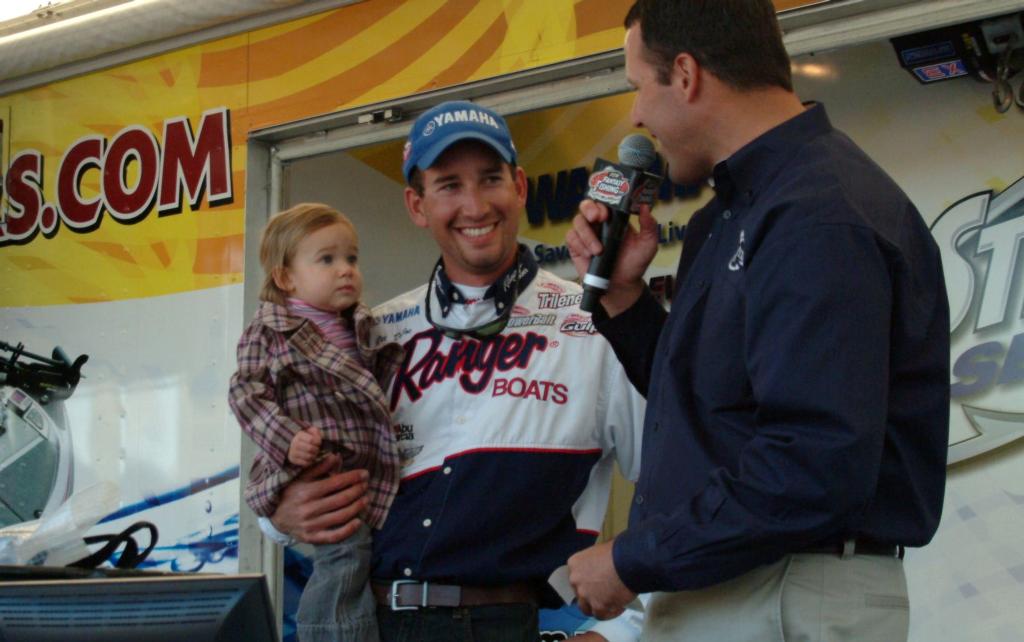 Three pros secure Cup berths … While six pros from the Central Division are competing for one Forrest Wood Cup berth, three pros from different divisions have already punched their ticket to Pittsburgh. Although he took 26th overall, Cody Meyer was the highest-finishing pro from the Western Division. Joining him will be Ott Defoe from the Southeast Division and Michael Iaconelli from the Northern Division. Iaconelli’s berth is significant considering he’s a full-time BASS Elite Series angler and loves to fish urban rivers. “This means everything to me,” said Iaconelli. “This is a dream that started back in July (at the first Northern Division qualifier on Lake Champlain). When we get to Pittsburgh for the Cup, I promise you we’re going to have crowds like you’ve never seen before.” Finishing three places behind Iaconelli was Kellogg’s pro Dave Lefebre. While Lefebre failed to secure an FWC berth this week, he’ll likely do so at either the upcoming FLW Series East-West Fish-Off or through the 2009 FLW Tour.

Two co-anglers headed to Pittsburgh … On the co-angler side, Tommie Goldston of Gardnerville, Nev., secured a spot in the Forrest Wood Cup as the only Western Division qualifier to make the top-10 cut. Scot Keefe of Hinesburg, Vt., finished 24th, but still advanced to the Cup as the highest finisher from the Northern Division. Cup qualifiers from the Central, Texas and Southeast divisions will be determined tomorrow.

Best for last … Stephen Smith may have been the last co-angler to weigh in today, but it was 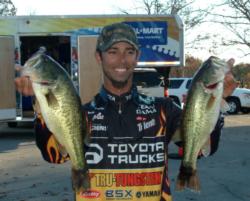 worth the wait. With a smallmouth, a spotted bass and a meanmouth, Smith took the lead at the conclusion of the opening round with 19 pounds, 9 ounces. “It was awesome,” he said. “But I was pretty nervous waiting in line for so long.”

Ike has a message for FLW Fantasy Fishing players … Iaconelli, never accused of being bashful, has a message for FLW Fantasy Fishing players. “I want to tell them to look up the stats from the 2005 Bassmaster Classic, look where I’m from and look at my Web site to see what kind of fishing I like,” he said. We’ll save the fans some time and report that Ike took fifth at the 2005 Classic held on the three rivers. Even though he fished a solid tournament, the Runnemede, N.J., pro will be looking for redemption next summer. “The way the rivers set up and how the fish relate, it’s exactly like the Delaware and Schuylkill rivers outside of Philadelphia where I grew up. I love that place, it’s industrial, it’s tough fishing – those are my roots.”

College student catching on … Zac Cassill, a geology and ecology major at Winona State University in southeast Minnesota, is a strange duck. Despite growing up in Fairfax, Iowa, and living in Winona, Minn., Cassill chose to test his bass-fishing skills in the Texas Division of the Stren Series. The young co-angler obviously lives closer to both the Northern and Central divisions, so why Texas? “I fished the Texas Division so I could ice-fish during the winter in Minnesota,” he said. Most Southern bass fishermen wouldn’t believe that there is a segment of anglers who don’t even use boats, instead driving full-size trucks on lakes and drilling into 30 inches of ice. While Cassill loves the hard water, he someday wants to fish for bass professionally. “Ever since I was 11 years old, I’ve always wanted to be a pro bass fisherman. And this is the best way to do it – through FLW.” 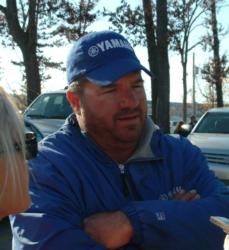 tournament held in the Ozarks. And at the conclusion of the opening round, that’s exactly the scenario. During the regular season, the Central Division hosted tournaments on nearby Bull Shoals Lake and Lake of the Ozarks. It’s also no secret that both of those lakes fish similarly to Table Rock. Currently, Texas pro David Curtis is leading the tournament, but six of the top 10 are from the Central Division.

Front hurts … As the 192 boats left State Park Marina this morning, there was disagreement among the field as to how the cold front would affect the fishing. Well, the results are in, and they aren’t pretty. Yesterday, 1,323 pounds were caught in the Pro Division compared to just over 1,000 today. Dozens of pros sang sad songs about disappearing fish, bass that wouldn’t bite and patterns that fell apart.

Honeycutt seeks back-to-back championship wins … Currently sitting in fifth place overall, Texas Division co-angler Keith Honeycutt is in prime position to capture back-to-back Stren Series Championship victories. In 2007, he caught only 3 pounds on day one on the Mobile Delta. He then rallied on day two to make the top-10 cut in sixth place. This year, he’s using consistency. On day one, he sacked 7-1 and today he caught 7-6. 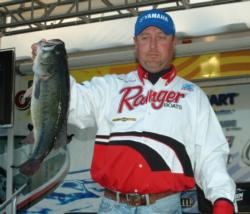 6-1: Weight, in pounds and ounces, of the day’s heaviest bass, caught by pro Toby Hartsell.

6: Number of Central Division pros who made the top 10.

2: Number of Texas Division pros who made the top 10.

1: Number of Southeast Division pros who made the top 10.

1: Number of Northern Division pros who made the top 10.

0: Number of Western Division pros who made the top 10.

23-15: Weight, in pounds and ounces, needed to make the top-10 cutoff in the Pro Division.

“I want to say hi to my wife and kids; I’ll be home just as fast as that Chevy truck will sling diesel.” – Pro Mark Rose. 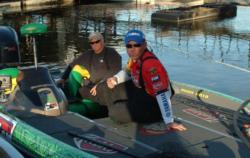 “I will if somebody breaks Ott’s legs.” – Lefebre, when asked whether or not he would make the top 10. Defoe was next in line to weigh his fish.

“I had a great tournament for a guy who didn’t catch any fish.” – Co-angler Jerry Lee, who managed only one bass over two days that weighed 2 pounds, 3 ounces.

“This lake has been great to me every day but today and yesterday.” – Northern Division pro Nicolas Supik, who caught 6-9 during the opening round.

“I had my fifth fish hooked up twice, and I lost them both one way or another. I was feeling real bad for myself until I saw Stacey King. Stacey’s probably the best fisherman on this lake, and he only caught two.” – Pro Danny Pierce.

“This lake is nothing like Seminole; I can promise you that.” – Clint Brownlee, who won the season opener and finished 139th at the championship.