Martin moves to top of the Rock 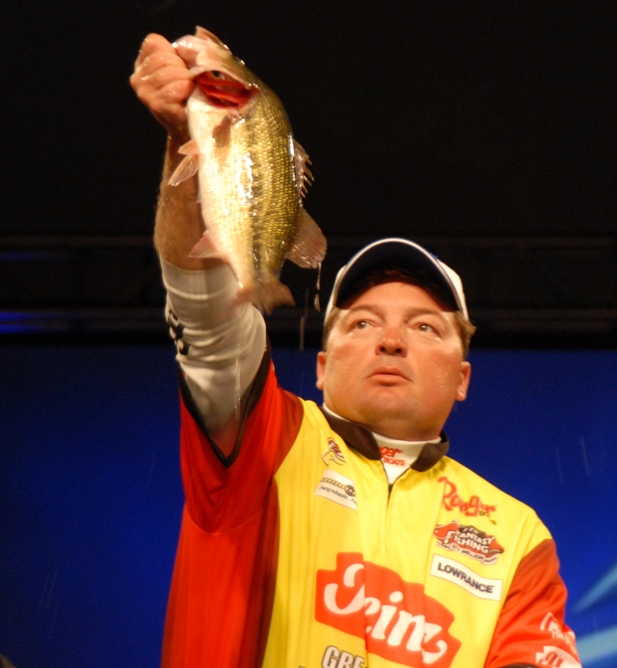 BRANSON, Mo. – The weather changed again on day three of Stren Series Championship at Table Rock Lake, and so did the leaderboard.

Blustery winds and a low ceiling of clouds kept water temperatures down Friday. With weights starting at zero this morning, the leaderboard shuffled around a bit.

Previous tournament leader David Curtis slipped to fifth place while two anglers in the bottom half of the top 10 catapulted to the top of the `Rock.”

Now leading the tournament is Rick Martin of Cherry Valley, Ill., a Central Division qualifier who is fishing his first Stren Series Championship.

Martin qualified 10th after day two, but moved to the front today with a five-bass limit weighing 15 pounds, 3 ounces.

A self-proclaimed river rat, Martin is making a long run up the James River, where he is concentrating on one section of river that has all the right ingredients.

“This place I’m fishing has bluff walls, chunk rock, bushes and lay-downs all in one area,” Martin said. “It’s got the perfect mix of shallow-water structure. It takes about an hour and a half to fish the best stretch, then I run back to the beginning of it and start over again.”

“I’ve got just two spinnerbait rods on the deck, and that’s it,” Martin added. “It’s basic river fishing, which is what I love to do.”

Brennan Bosley of Benton, Ark., is now in second place with a five-bass limit weighing

Bosley is doing what he likes best: cranking.

“I feel like I’ve covered a million miles of water today,” he said. “I’m fishing about 25 places per day and running my gas tanks dry.”

As for tomorrow, Bosley is excited about his chances of winning.

“I’ve been getting a big bite every day, and I did not get one today,” he added. “Hopefully I’m due for a big bite or two tomorrow.”

Scott won the Stren Series Championship on Wheeler Lake in 2006 and wants another one.

He is fishing the same homemade spinnerbait he used to win at Wheeler.

The spinnerbait features two white willow-leaf blades and a white skirt. Scott says it looks like a 3/8-ounce spinnerbait, but he has added a little extra lead to the body for casting distance.

“I’m targeting wood and windswept banks with it,” Scott said. “I’ve been catching mostly largemouths, but today the spotted bass started crushing it – I guess this weather got those spotted bass going.”

Local pro Robbie Dodson of Harrison, Ark., is in fourth place with a five-bass limit weighing

Dodson, who knows Table Rock well, has been relying on a Wiggle Wart, custom painted by Tim Hughes, and a spinnerbait to target wind-blown banks and shade.

“I’m focusing on pea-gravel banks, rock and wood,” Dodson said. “I’m fishing from the bank down to about 10 feet.”

Dodson added that he felt like the leaders may have slipped away from him today.

“I really needed to cull two of my fish today to have a chance at winning,” he noted. “I believe I might be a little too far behind now.” 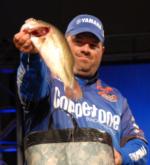 David Curtis of Trinity, Texas, is now in fifth place with a two-day total of 12 pounds, 14 ounces.

Curtis has been starting each day on a special brush pile in 20 feet of water.

“It’s now officially called the two-fish hole,” Curtis said. “Every morning I’ve started there I’ve caught two good fish immediately, and then it’s over. I’ll stay around and fish it for another hour or so and never get another bite.”

Curtis has several other deep-water breaks in 12 to 20 feet of water that are also producing fish, but none as good as the two-fish hole.

Once Curtis gets a limit off his deep fish, he moves to the bank with a Lucky Craft RC 2.5 and begins covering shallow wind-blown banks.

The shallower pattern has produced some culls for him this week, including one today.

Rounding out the top 10 pros in the Stren Series Championship on Table Rock after day three:

Day four of the Stren Series Championship on Table Rock Lake will begin at 7 a.m. Saturday at State Park Marina, located at Highway 165 S. in Branson.