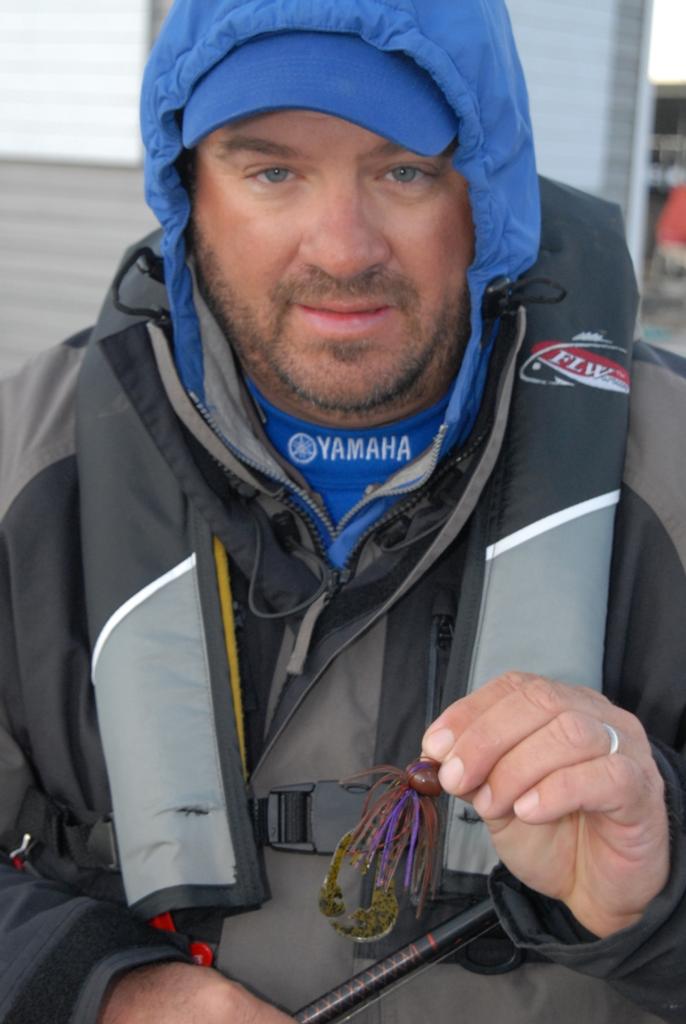 BRANSON, Mo. – One of the great things about the White River chain of lakes in the Ozarks is the variety of lures which can be employed to catch bass.

Unlike some areas of the country where lure choice is confined to certain categories like soft plastics, the tackle box is wide open at Table Rock.

As the top 10 pros made final preparations to tackle before the day three takeoff at the Stren Series Championship, the arsenal of lures being retrieved from rod boxes ran the gamut from drop-shots and jigs to spinnerbaits and crankbaits.

For starters, the tournament leader of round one, David Curtis of Trinity, Texas, had a trio of lures that included a ¾-ounce Bass-X football jig, a Carolina rig and a DD-22 crankbait.

Curtis is mining specific spots in 12 to 20 feet of water with these lures.

Down the dock, Lendell Martin of Nacogdoches, Texas, was tieing on a spinnerbait.

The rest of the rods on his deck leaned heavily towards jigs and drop-shots, but the blustery wind prompted the spinnerbait addition.

“When it’s gets windy like this on Table Rock, you better have a spinnerbait tied on,” Martin offered.

A few boats over, Ott Defoe was doing a little Knoxville, Tenn., home-cooking with a handmade crankbait.

An expert with flat-sided crankbaits, Defoe was downsizing his crankbait to match the weather conditions.

“This little plug is made by Bobby Gamble,” Defoe said. “The last couple of days, the weather has been warmer and I’ve been using a more aggressive crankbait that had more action. But when it gets cold like this, I try to match the activity level of the baitfish. This plug is smaller and has a much tighter action.”

Defoe prefers to throw the small crankbait on a spinning rod spooled with 8-pound-test 100% Trilene Fluorocarbon.

“Light lures and heavy wind can be a bad combination with a casting rod,” Defoe added. “So the spinning rod is a better choice for this type of fishing.”

And speaking of home cooking, Ricky D. Scott was touting his homemade spinnerbait that produced a Stren Series Championship win for him two years ago at Wheeler Lake.

Scott’s favored creation features two all-white willow blades, a white skirt and a red head. He is using the lure on wind-blown banks and trees.

“I’ve won one championship on it; hopefully it will bring me another win here,” he said.

Greg Bohannan has relied on a Table Rock staple this week – a Storm Wiggle Wart – to make the top 10.

Bohannan adds his own flair to his Wiggle Warts by having them custom painted by Fall Creek Lures.

“The Wiggle Wart is usually a springtime deal here, but they’re already eating it this year,”

Bohannan said. “Every bass I catch on it has the lure all the way down its throat.”

Finally, Mike Iaconelli is dedicated to the deepwater bite with an armament of drop-shots and jigs. In all, four rods on his deck featured drop-shots and another four held jigs.

“I’ve got a lot of duplication up here on the deck and that’s a function of efficiency,” the New Jersey pro detailed. “Some of the places I’m fishing are deep trees in 30 to 60 feet of water and getting hung up is part of it. So I keep plenty of duplicate rigs up here on the deck; if I break off, I can just pick up another rod and get back to it.”

“Also, under my deck lid, I’ve fastened eight or nine premade drop-shot leaders that are ready to go. I can be back in action with a drop-shot in a matter of seconds with those pre-made leaders instead of a matter of minutes if I had to rig one up from scratch.”

For some of his drop-shot rigs, Ike is relying on 8-pound-test Berkley Fireline for his main line and 8-pound Trilene Fluorocarbon for his leader.

“That Fireline is the deal for deep drop-shotting around those big trees,” he added. “It super sensitive for feeling bites and when you get hooked up, you can reel the fish right up through the timber.”

Friday’s weigh-in will be begin a 4 p.m. at the Branson Convention Center, located at 200 West Main Street in Branson. Doors open at 2 p.m. to kick off the free FLW Outdoors Family Fun Zone.