Curtis crushes at the ‘Rock’ 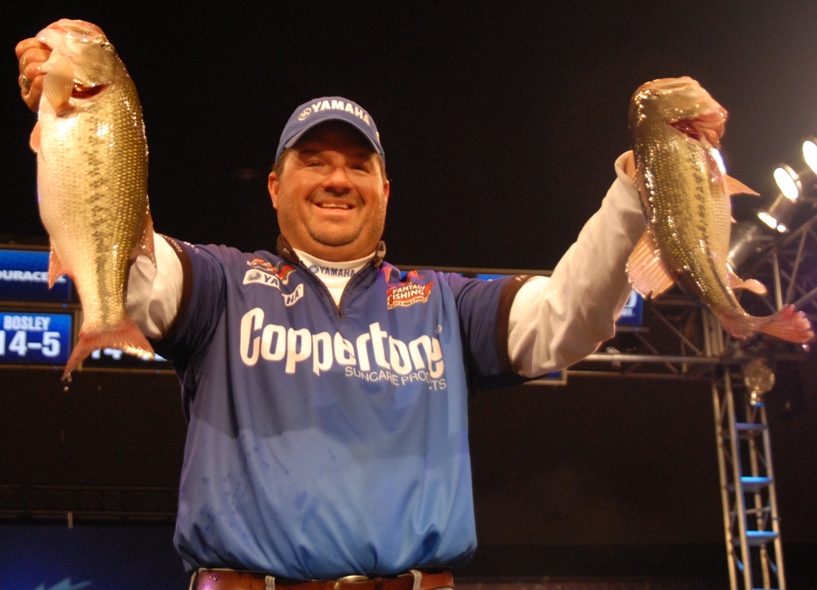 BRANSON, Mo. – David Curtis of Trinity, Texas, loves fishing in the summer and fall for one reason: It’s the time of year that big bass school up on offshore structure.

“This is my time of year,” Curtis said after leading day two of the Stren Series Championship at Table Rock Lake earlier this week. “I love it when I find big bass grouped up offshore. It’s like searching for a needle in a haystack, but when you find them – it’s absolutely unbelievable.”

And if you are wondering just what Curtis means by “absolutely unbelievable,” perhaps the limit of bass he weighed in on the final day of the Stren Series Championship is a better definition: 22 pounds, 12 ounces.

“Absolutely unbelievable!” Curtis reiterated today after weighing in the biggest limit of the tournament to win the Stren Series Championship by more than 5 pounds.

“I had a deep place I’d been kind of saving all week, and when I got lined up on it right today it was l-l-loaded,” said Curtis, intentionally exaggerating the `l’ for emphasis.

“I probably caught twenty fish off it, just one big one after another.”

This win is reminiscent of Curtis’ two Texas Tournament Trail Championship victories, where he located offshore schools of big bass in the fall of the year.

In fact, this is Curtis’ fifth FLW Outdoors win between his efforts in the Stren Series and the Texas Tournament Trail. His $155,000 win today brings his FLW Outdoors winnings to just over $600,000.

Curtis has not only become accomplished at finding such schools of fish, he has also mastered the art of managing those fish throughout the course of multiple-day tournaments.

Earlier in the week, Curtis talked of his “two-fish” hole, where he caught two of his biggest keepers each morning. But it was not the two-fish hole he was saving. His winning stringer today actually came off his secondary spot – a deep ledge located far up the White River.

“This place had a long straight ledge along the channel, and at the very end of it, the ledge turned and formed a corner in about 18 feet of water,” Curtis described. “I knew the corner was the sweet spot; when I found it in practice, it had a bunch of fish on it – they were smaller, but it was loaded.”

Each day of the tournament, Curtis would start at the two-fish hole, pluck two quality fish and then move to the secondary spot.

“The long, straight ledge had a lot of spotted bass on it,” he continued. “And each of the first two days I would actually finish off a limit before I got to the sweet corner – so I never even fished it.

“Yesterday, that spot produced one decent cull fish, but I did not really take the time to line it up right and fish it hard.”

When Curtis returned to the corner today, he idled over it with his electronics, and the screen lit up with more arches than McDonalds. Needless to say, Curtis got a little excited.

He began his largemouth assault with a Bass-X ¾-ounce football jig. After throttling through a multitude of keepers for a “decent” limit, he then picked up a Norman DD-22 and culled up even further.

“There’s no way to explain it when you find a school like that,” Curtis said. “It’s what I live for.”

Additionally, for the second year in a row, Curtis will be attending the Forrest Wood Cup on a Stren Series Championship berth.

“To win this event and get a Forrest Wood Cup invitation through the Stren Series …” Curtis paused. “It’s been a pretty special week.”

David Curtis was not the only pro to stun the weigh-in crowd at the Branson Convention Center today.

Before Curtis weighed in, Kellogg’s pro Greg Bohannan of Rogers, Ark., electrified the audience with a 20-pound, 6-ounce catch.

Even more amazing was that Bohannan used a buzzbait to do his damage.

The video footage provided by FSN on the JumboTron showed closeup clips of Bohannan’s white War Eagle buzzbait sputtering along the surface before being annihilated by a large bass. It’s the kind of scene most bass anglers see in their sleep at night.

“I made the finals on a Wiggle Wart, but when that cold, cloudy weather came in late yesterday afternoon, I knew I needed to throw a buzzbait,” Bohannan said. “I don’t know what it is about that kind of weather on these Ozarks lakes that makes those bass go crazy for a buzzbait, but, man, it’s fun! I threw it all day long and probably caught 15 keepers on it.”

The Arkansas pro fished flat, shallow pockets in the Cape Fair area for his big catch.

Martin spent his week up the James River throwing spinnerbaits to flooded brush and bushes.

His spinnerbait was a homemade version in a 3/8-ounce size.

“It’s basically just a white and chartreuse spinnerbait with tandem willow blades,” Martin said. “The best retrieve around those bushes was just a nice steady retrieve – not burning it, not slow-rolling it – but just an easy, medium speed.”

Bosley’s main weapon at Table Rock this week was a pair of crankbaits: a Wiggle Wart and a Lucky Craft RC 1.5.

“I did most of my damage on the Wiggle Wart,” Bosley said. “I was using it on major creek-channel swings, ledge rock and bluff ends; the 1.5 was used in the back ends of creeks.”

Bosley handpaints his own Wiggle Warts.

“I’m a big fan of the green-phantom color scheme,” he added. “I have about five different versions of that one color that I paint, and they work great on Ozark lakes.”

Defoe’s winnings included $20,500 and an early berth to the 2009 Forrest Wood Cup by virtue of being the highest finisher from the Southeast Division.

Defoe spent the week far up the James River, cranking a homemade crankbait crafted by Bobby Gamble in Tennessee.

“The strangest part of my pattern was that the best cranking water I found was just slick mud in the backs of creeks,” Defoe said. “Not really rock, not really wood, but just mud. The only thing I can figure is that when it gets cold like this, the baitfish go to that mud because it’s warmer. Some of the best spots I fished this week were nothing-looking, slick mud banks in the backs of creeks.”

Rounding out the top 10 pros in the Stren Series Championship on Table Rock Lake: