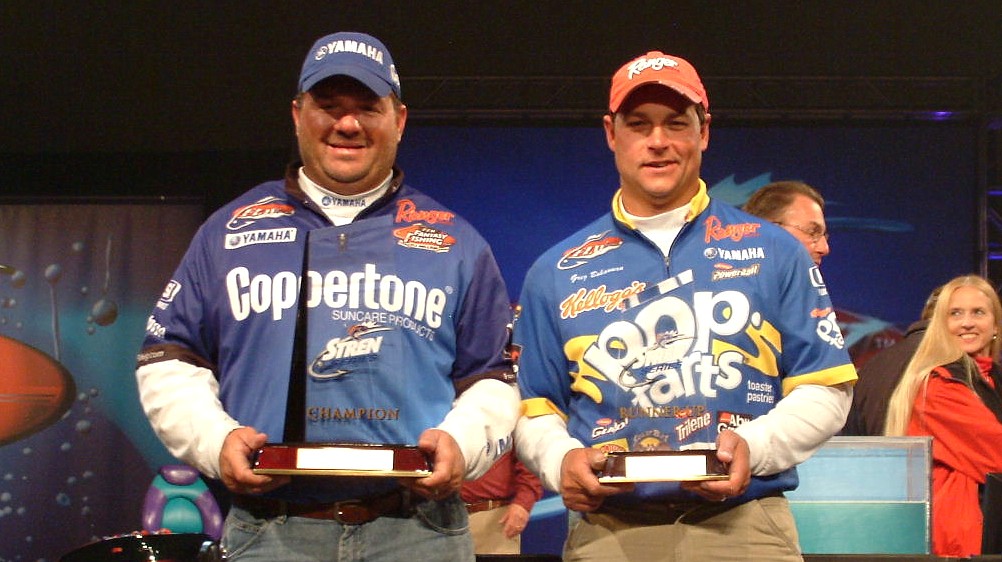 Five pros to Pittsburgh … It isn’t supposed to be this easy, but David Curtis and Greg Bohannan certainly make it look that way. As the highest finishers from the Texas Division and Central Division, Curtis and Bohannan have qualified for the Forrest Wood Cup two consecutive years through the Stren Series Championship. Joining them in Pittsburgh next July will be Michael Iaconelli from the Northern Division, Cody Meyer from the Western Division and Ott Defoe from the Southeast Division. “Man, that is awesome,” exclaimed Curtis. “But to be honest 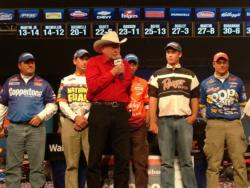 with you, I came here wanting to win this event more than anything. But to be able to go to the Cup for the second consecutive year – I can’t believe it.” For Bohannan, the primary focus was the Cup berth and not a tournament victory, so both anglers achieved their lofty goals: “I was more nervous about making the Cup than I was about winning this event. I don’t have to catch a single bass next year on the FLW Tour, and I’ll still get to go to Pittsburgh.”

Bohannan family expecting … Being prequalified for the Forrest Wood Cup can take the pressure off an angler. But in Bohannan’s case, it also allows for some family flexibility. Bohannan’s wife is 16 weeks along with the couple’s first child. That puts the baby due near the end of April – smack dab in the middle of the National Guard Open on Lake Norman in Charlotte, N.C. Now that Bohannan has his Cup berth in hand, he doesn’t have to decide between fishing and family. “If I need to, I’ll be coming home,” he said without being prompted.

Defoe does the opposite … Curtis and Bohannan may have qualified for the Cup two consecutive years, but Defoe has also done it twice. In 2006, Defoe qualified through the Southeast Division – the same division he fished this year. But last year he fished the Northern Division, and he plans to head north again next year. While most Stren anglers fish the division closest to home, the young Knoxville, 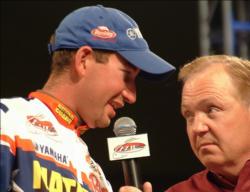 Tenn., pro picks the division that best fits into his schedule. In doing this, Defoe has inadvertently given himself a unique advantage. As a Southeast Division pro this season, he was the only angler from that division to qualify for the top 10 this week. If he would have fished the Central Division, he would have scrapped for a Cup berth against five other Central Division anglers. Next year, Defoe will fish the Northern Division, and the championship is slated for Pickwick Lake in northern Alabama. In all likelihood, there won’t be too many Northern Division pros that can compete with Defoe on a TVA lake. “Basically, I’ve been fishing the opposite division of where the championship is held,” he said. “I don’t do it on purpose; I pick the schedule that fits best. That’s how it worked out this year, and that’s my plan for next year.”

Chilling on the Rock … With the exception of day one, it has been a cold and windy week on Table Rock Lake. But that’s to be expected in the fall, as a new weather pattern seems to arrive daily. Day four was freezing – literally. At takeoff, the temperature was 31 degrees. But the cold and blustery weather actually turned the bite on. “This lake actually gets better the windier and colder it gets,” said Bohannan. “I’m not exactly sure why, but I like it.” Sure, it was cold in Branson today, but that was nothing compared to Bismarck, N.D., the site of the 2008 FLW Walleye Tour Championship. Thousands of customers in the Dakotas are still without power after a fierce storm delivered a wintry mix of freezing rain and snow. 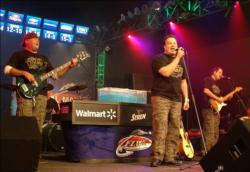 DoGtag rocks … Prior to the day-four weigh-in, the band DoGtag performed a free concert to the sizeable crowd. DoGtag, which is based out of Branson, performs current and classic modern music hits. Not only are they musically talented, each member of the band served in a branch of the United States military. “To play in front of a weigh-in tank is something I never dreamed I’d do,” quipped the lead singer. “I actually dreamed of becoming a bass pro, but that never happened.”

Spinnerbaits in the Ozarks … For the past few years, the spinnerbait has been all but dead to the bass-fishing world. With increased pressure, largemouths and smallmouths have become conditioned to the blade baits. But at the Walmart Open on Beaver Lake, the spinnerbait made a triumphant return as high and dirty water changed the tournament landscape dramatically. In the fall, however, the spinnerbait is a proven producer in the Ozarks, and this week’s blustery weather only helped its cause. “The fish suspend in the clear water and are in the chasing mood,” said pro Ricky D. Scott, who used a homemade spinnerbait this week. “When the conditions are right like they were today, you can draw them up from a long ways away.” Bohannan agreed with Scott, “When the weather is like this on Beaver, Table Rock and Norfork, the big ones eat and you’ve got to throw something they’ll chase.” 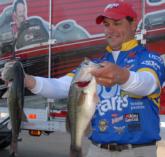 Sorry Rose, no Fish-Off for Bohannan … Last season, Bohannan qualified for the Cup through the Stren Series and still fished the FLW Series East-West Fish-Off. At the Fish-Off, Bohannan defeated his opponent, Western Division pro Roy Hawk. Since the Rogers, Ark., pro was double qualified for the Cup, the extra slot went to the pro who lost his head-to-head matchup with the heaviest weight. Ironically, that pro was Mark Rose, who happens to be Bohannan’s friend and travel partner. Rose then went on to finish ninth at the Cup and take home $30,000. This year, Rose can qualify for the Cup through the upcoming Fish-Off, but he won’t have Bohannan as a backup plan.

308,661: Number of dollars earned by Curtis the last two seasons despite not fishing a single tour-level qualifier.

15: Number of keepers caught on a buzzbait by Bohannan, who hadn’t thrown the lure until today.

5: Number of top-10 cutoffs made by Iaconelli in five Stren Series tournaments this year.

“Now that I’ve fished the FLW Tour, I know how hard it is to qualify for the Cup, and I value that spot even more.” – Defoe. 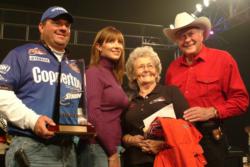 “When things are meant to be, they just happen; its like magic.” – Iaconelli.

“I’m going to do this backwards and save my little fish for last.” – Curtis, just before he tricked the crowd and lugged out twin 6-pounders.

“If it would have been calm, I think I could have won it out deep.” – Harrison, Ark., pro Robbie Dodson.

“When you make the top 10, you need to go for it, and that’s what I did.” – Lendell Martin Jr., who swung for the fence on day three and caught only one keeper.

The 2009 Stren Series season kicks off Jan. 15-17 as the Texas Division hosts its first qualifier on Falcon Lake in Zapata, Texas.