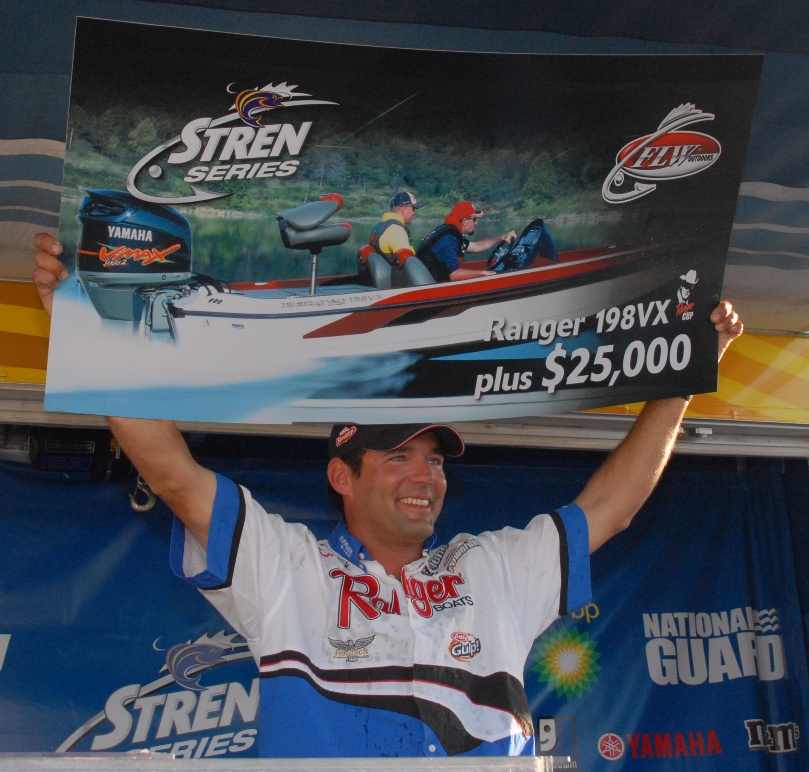 CLEWISTON, Fla. – After catching the biggest limit on day one of the Lake Okeechobee Stren Series event weighing 24 pounds, 3 ounces, Kevin Long of Clewiston, Fla., refused to relinquish his lead over the next two days to win the Southeast Division opener with a three-day total of 49 pounds, 14 ounces.

“I’ve been dreaming about this since I was 12 years old,” said Long, who guides on Okeechobee during the winter. “As you get older, you start to wonder if a win is ever going to happen, and when it does, it’s more of a relief than anything – it gets the monkey off your back and really restores your confidence.”

Today Long fended off a charge from fellow Okeechobee guide Mark Shepard, who toted in 14 pounds to take aim at Long’s lead of 10 pounds after two days. But Long’s day-three limit weighing 10 pounds, 7 ounces was enough to hold Shepard off.

If there was a dominant theme in the Okeechobee Stren this week, it was certainly the Reaction Innovations Skinny Dipper swimbait. Nearly every pro and co-angler who crossed the stage today 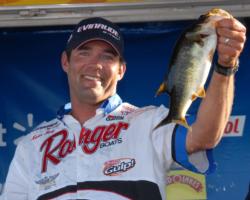 made mention of Okeechobee’s hottest bait, starting with Long.

He fished the Skinny Dipper (in a color called Houdini) on a 7-foot, 11-inch Fenwick Elite Tech Flippin’ Stik with 65-pound-test Spiderwire Ultracast braid. He rigged the bait with a Reaction Innovations Screwed-Up Bullet screw-lock device (which is not a weight) and a 6/0 Gamakatsu EWG hook.

“The big key for me was using an Abu Garcia Revo 7.1-ratio reel,” Long said. “Not only does it make a superlong cast, but it gets the bait up and running faster than slower reels. Another thing that was important was reeling the Skinny Dipper at just the right speed that fish wanted – not too fast, but not too slow either. There is a perfect speed that allows the swimbait to wobble on the surface just right, and that faster reel helped maintain the critical speed.”

He used 50-pound Spiderwire Ultracast braid on the fluke.

Long spent the week fishing in the southern portion of the lake to get away from fishing pressure.

“After the first day, when I weighed in the big limit, I thought those fish were just moving into my area,” he said. “But as the week went on, it seemed like the area was more on the back side of a spawning wave rather than the front side. I’m just glad there were enough fish in there to protect that day-one lead.”

For his win, Long was awarded a fully rigged Ranger boat and $25,000 cash.

Joseph Kremer of Osteen, Fla., finished third with a three-day total of 38 pounds, 9 ounces and collected $7,787.

Kremer was one of the rare anglers who did not attribute his Okeechobee catch to a Skinny Dipper. Instead he relied on a Culprit topwater frog (June bug) to cover water, and when he found a bass on bed, he would stop and pitch a Culprit Fox Craw to it.

“I mostly sight-fished this week,” Kremer said. “For some reason the fish were really spooky, and a lot of them would run off and not come back. But when I found one that would hang around for while, I’d spend some time trying to catch it.”

Bryan Honnerlaw of Moore Haven, Fla., rallied from 10th place today with the day’s biggest limit in the

Honnerlaw spent his first two days on the south end of the lake buzzing Skinny Dippers and soaking Senkos for his bites. But today he completely changed up.

“I had some good fish located south, but something happened to them and they just quit on me,” Honnerlaw said. “So when I made the top 10, I decided to start from scratch this morning and make a long run to the north to some fish I found early in practice. And it paid off. There were some good ones that had moved on beds in there, and I spent the day sight-fishing with a variety of lures.”

Palmore spent most of his tournament time in the Tuner’s Cove area, seining one 200-yard stretch with junebug Skinny Dippers tied to 65-pound test Power Pro braid and flipping small mats of vegetation with a Sweet Beaver tied to 20-pound test Gamma line.

“The key was moving the boat very slowly and covering water thoroughly,” Palmore said. “I just kept easing back and forth on this one stretch and it kept producing fish on each pass. I finally ran out of junebug Skinny Dippers today and I had to start melting, gluing and biting down the used ones to make do.”

Rounding out the top 10 pros in the Stren Series event on Lake Okeechobee:

The next Stren Series event in the Southeast Division will be held on Santee Cooper April 30-May 2.