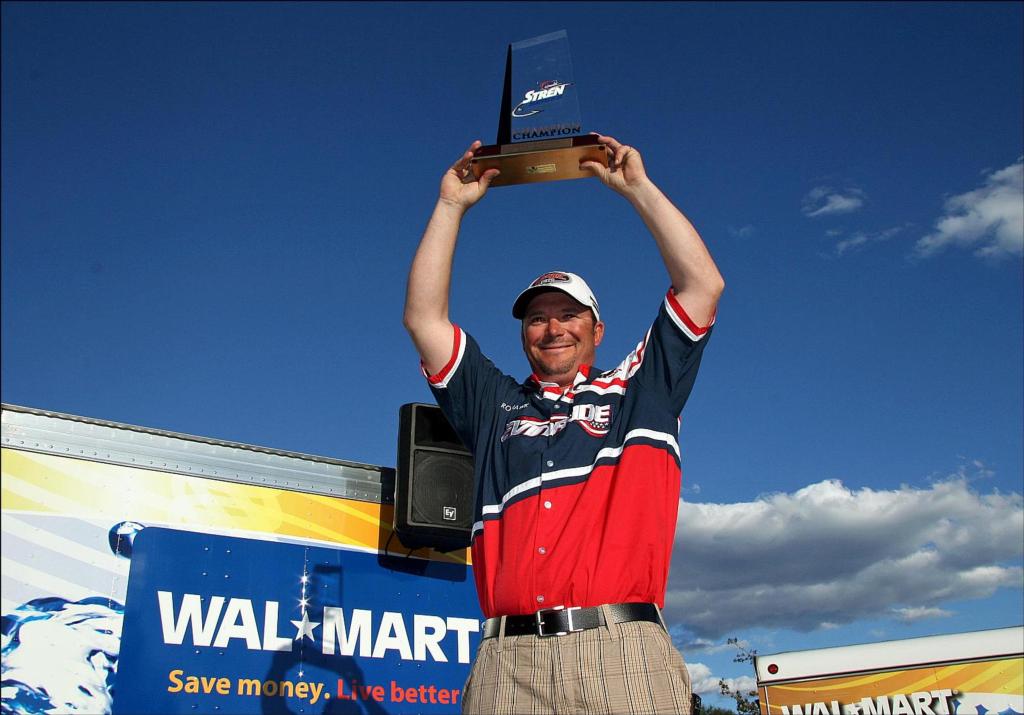 Having won the Stren event at Clear Lake in March, Roy Hawk is the first angler to score back-to-back Western division victories. Photo by David A. Brown.
April 18, 2009 • David A. Brown • Toyota Series

PAYSON, Ariz. – Ladybugs are bad news for aphids, but good news for bass anglers. There may be little scientific evidence for the latter premise, but it seemed plausible for Salt Lake City, Utah, pro Roy Hawk in his commanding victory at the Stren Series Western Division tournament on Lake Roosevelt.

Like a savvy gardener, who appreciates the pest-controlling appetites of the red shelled flying insects, Hawk smiled when he saw one of those aphid eaters in the weigh-in tank. Standing next to Clifford 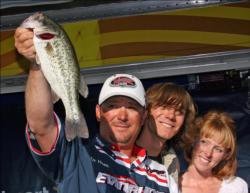 Pirch, the local pro who had taken the lead with 38-3, Hawk said: “I hate to tell you this Clifford, but there’s a ladybug in my (tank). Maybe that’s good luck.”

Notably, Hawk and Pirch both caught the same weight (13-14) on day three. However, Hawk’s heavier bags on days one and two (14-12, 13-12) gave him the edge going into the final round. Placing third on day one, he took over the lead on day two and finished with 42 pounds, 6 ounces – a winning margin of 4 pounds, 3 ounces.

Throughout the tournament, Hawk caught most of his fish by slow-rolling an ounce spinnerbait along deep ledges in 10 to 16 feet with sparse brush at the mouth of the Tonto River. Since he helped design 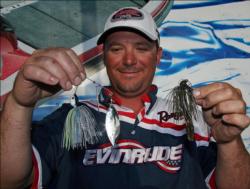 the bait for Pepper Custom Baits, it’s only fitting that the color is named “Hawk’s Secret.” He also caught fish on a Pepper jig with a green-pumpkin Yamamoto trailer.

Hawk, who won the Stren Series Western Division event on Clear Lake in Kelseyville, Calif., in March, became the first angler to win back-to-back tournaments in this division. He’s also leading the division’s Angler of the Year points race. For his victory, Hawk earned $20,423 cash and a fully rigged Ranger boat.

Despite his inherent advantage of local knowledge, Pirch admitted that he had a tough tournament for the same reason as everyone else. The cold front that pushed into the area a day before the tournament torched many of the plans established during practice.

“I really had to scratch around,” he said. “That cold front changed things for me. I expected to be able to 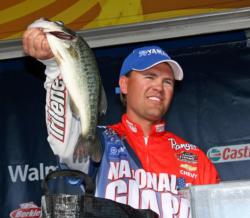 sight-fish all week. I was looking at some big fish (in practice), but it just never happened.”

Pirch said he got most of his fish on weightless, wacky and Texas-rigged Berkley Power Worms fished around flooded brush. Exemplifying the “never give up” mentality essential to competitive fishing, Pirch recalled a moment of last-cast heroics.

“At the end of the day, I had about a minute and a half left before I had to leave for the weigh-in,” he said. “I had run out of targets, and I had one about 100 yards ahead, but it would have taken all of my time to trolling motor to it. I pulled my trolling motor up, threw my vest on and idled up to the spot.

“This was the last target on the whole bank, so I said a prayer: `Lord, I have to get one more good fish.’ I threw out toward this log and let it go down about 5 feet. I was just about to pull up the trolling motor when my line (came tight). I set the hook and got my last fish over the slot limit.” 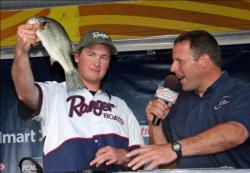 You wouldn’t know that Redding, Calif., pro Cody Meyer was new to Lake Roosevelt by his solid performance. Combining a 10-pound, 12-ounce effort on day one with a big day-two bag of 15-7 and a final-round limit weighing 7-14, Meyer finished with 34-1 worth $6,536.

Meyer said he’d hoped to replicate the topwater action he enjoyed on day two, but that never materialized, so he switched to soft plastics. The fish that did rise on his surface baits only looked at the plug without striking.

Adversity plagued Meyer throughout the tournament in the form of navigational issues, trolling motor malfunctions on two consecutive days, and a scorpion that snuck into his sleeping bag and delivered a nonvenomous, albeit painful, sting.

“I’m just happy to have made the top 10,” Meyer lamented.

Stachowski steps up to fourth

Gaining a notch from day two, David Stachowski of Tucson, Ariz., caught a limit weighing 10-13 to 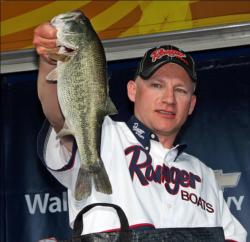 finish with 33-12 worth $5,719. Stachowski fished a Texas-rigged green-pumpkin brush hog and surmised that the cold front actually helped his cause by positioning fish tighter to cover.

On his first spot, Stachowski flipped his bait next to a tree and came tight on what felt like the bass of a lifetime. The fish wrapped up deep and Stachowski ended up losing the giant and breaking his flipping rod in the process.

Demoralized, Stachowski recomposed himself and went back to work. On his next cast to the same spot, his rod doubled with another huge fish. This time the angler prevailed, but when the fish rolled topside, the sight of its whiskers helped Stachowski get past the previous loss.

“That made me feel better knowing that the first fish was probably a big catfish also,” he said. “That helped me calm down and get back to fishing.” 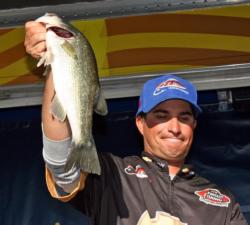 Justin Kerr of Simi Valley, Calif., caught a limit weighing 10 pounds 10 ounces in the final round to finish with 33-4 worth $4,902. In the first two rounds, he posted weights of 11-3 and 11-7. Kerr said he used a ChatterBait to cover water and locate fish, after which he’d work a drop-shot. This strategy yielded 30 to 50 fish each day.

Rounding out the top 10 pro finishers at the Stren Series Lake Roosevelt event: