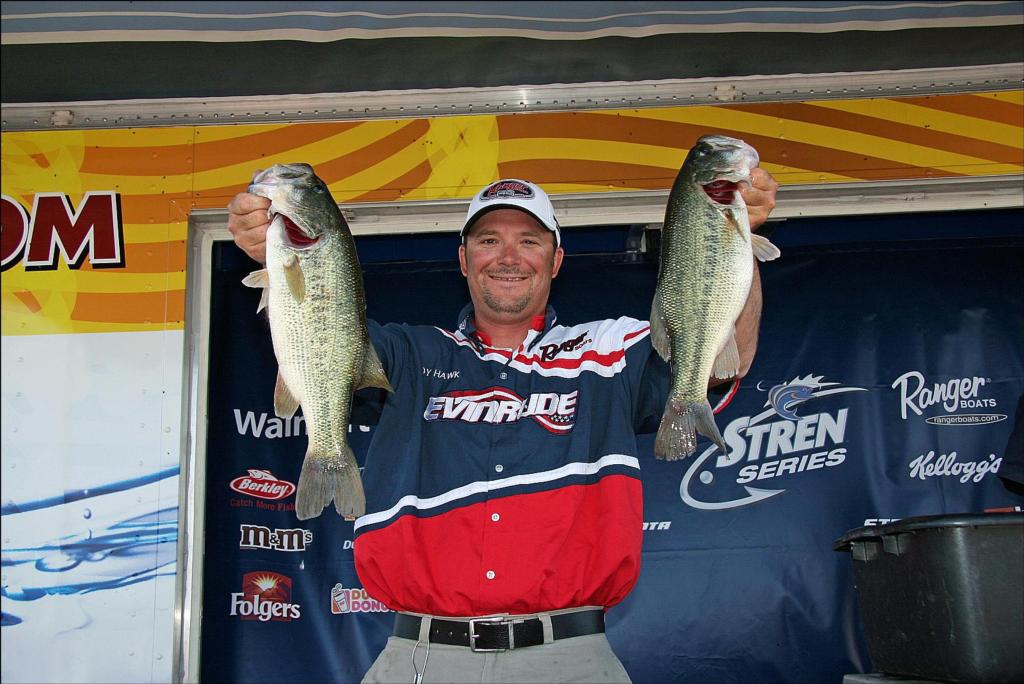 PAYSON, Ariz. – The weather warmed, optimism rose and the fish, well, they apparently didn’t get the memo about being more cooperative for Stren Western Division anglers on Lake Roosevelt.

A downright gorgeous day greeted the field launching from Cholla Recreation Site on the lake’s west side, north of the Roosevelt Dam. The general thought was that sunny conditions would warm the water and stimulate a bunch of bass that had slipped into a post-frontal funk after a cold spell moved across the region a day before the tournament. It didn’t exactly work out that way.

In fairness to the fish, some did their part to make a sporting go of it. Just look at the 7-pound, 1-ounce largemouth that won Folgers Big Bass honors for California pro Steve Adams. Flipping Texas-rigged 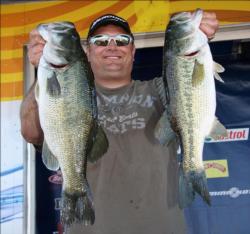 soft plastics, Adams caught the big fish on a bed. That fact alone stands unique, as the cold front pushed the prespawn females back into deeper water just before this little shindig got rolling.

Elsewhere, Phoenix pro Brian Daniels blasted his way up the standings with the day’s heaviest stringer – a 15-pound, 14-ounce effort that moved him from 121st place on day one to 17th. Pro Kelly Leigh of Yuma, Ariz. took a similar rocket ride with a 14-pound, 15-ounce limit that gained him 102 notches from 129th to 27th. 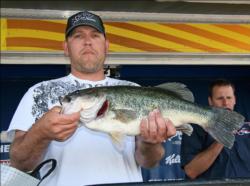 Pro leader Roy Hawk of Salt Lake City, Utah caught most of his fish by working a 1-ounce spinnerbait with willow blades across deep ledges at the mouth of the Tonto River (north end of Lake Roosevelt). When the blade bite died in the afternoon, he slowed down and caught two of his keepers on a 1/2-ounce green pumpkin jig.

Hawk fared well by slow rolling the spinnerbait off the ledge and into brush. He discovered this pattern during practice and felt confident with what he saw, although the area has its limits. “I caught a fish on a spinnerbait and pulled up a school of fish with it. Today, we worked over that area pretty hard, so I don’t know what’s left there.

“I might have to switch it up tomorrow, but I thought if I can make it to the top 10, I can just go out and swing for the fences (in the final round). I’m going to fish the conditions and see what happens.”

He made a judgment call that cost him his day one lead, but Reno, Nev. pro Duane Dunstone knows he’s 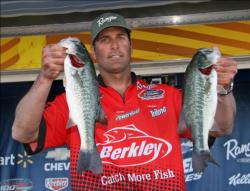 still very much in contention for the top spot. Moreover, he said he feels confident that he’ll have plenty to work with in Saturday’s final round.

Dunstone had his limit by 9 a.m., after which he scouted new waters and essentially prefished for the final round. He said he knew that he could squeeze more out of his spot, but the likelihood of making the top-10 cut compelled him to fish conservatively.

“I really wanted to lead for one more day, but I didn’t want to (burn) all my fish,” he said. “Tomorrow, I’m going back to my spot and I’m going to take as much as I can.” 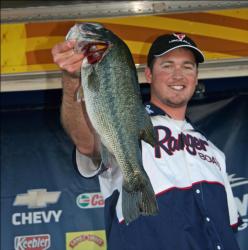 In his first appearance on Lake Roosevelt, Redding, Calif. pro Cody Meyer said flexibility and versatility are his most valuable tools. “This is a new lake for me so I’m just fishing with an open mind. I’m fishing new water every day and catching them different ways every day.”

On day two, a 1/16-ounce Jackal flick shake head with a green pumpkin worm produced a limit, but black and white River to Sea frogs yielded his two largest bass. Meyer’s 15-7 limit – the day’s second largest bag – moved him up 19 notches from 22nd on day one and gave him a total of 26-3.

In fourth place, local pro Clifford Pirch of Payson, Ariz. fell one bass short of a limit, but still bagged 11 pounds, 9 ounces for a total of 24-5. David Stachowski of Tuscon, Ariz. took fifth with 22-15.

Rounding out the top-10 pro leaders at the Stren Series Lake Roosevelt event: 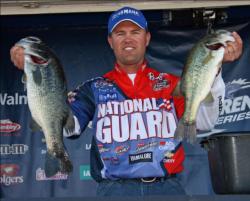 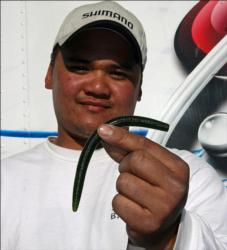 Tucson co-angler Vu Au held onto the lead he established on day one, despite a dismal day two performance. After catching a day one limit weighing 16-5, Au caught only a pair of keepers in the second round. Flipping Sweet Beavers and tubes did the trick on day one, but today required a change to Senkos.

Roy Desmangles Jr. of Lincoln, Calif. placed second with 20-15, while Michael Tafoya of La Plata, NM took third with 17-14. Keith Adams of McKinleyville, Calif. was fourth at 16-9, followed by Britt Brittain of Cupertino, Calif. in fifth with 15-11.

Rounding out the top-10 co-angler leaders at the Stren Series Lake Roosevelt event: