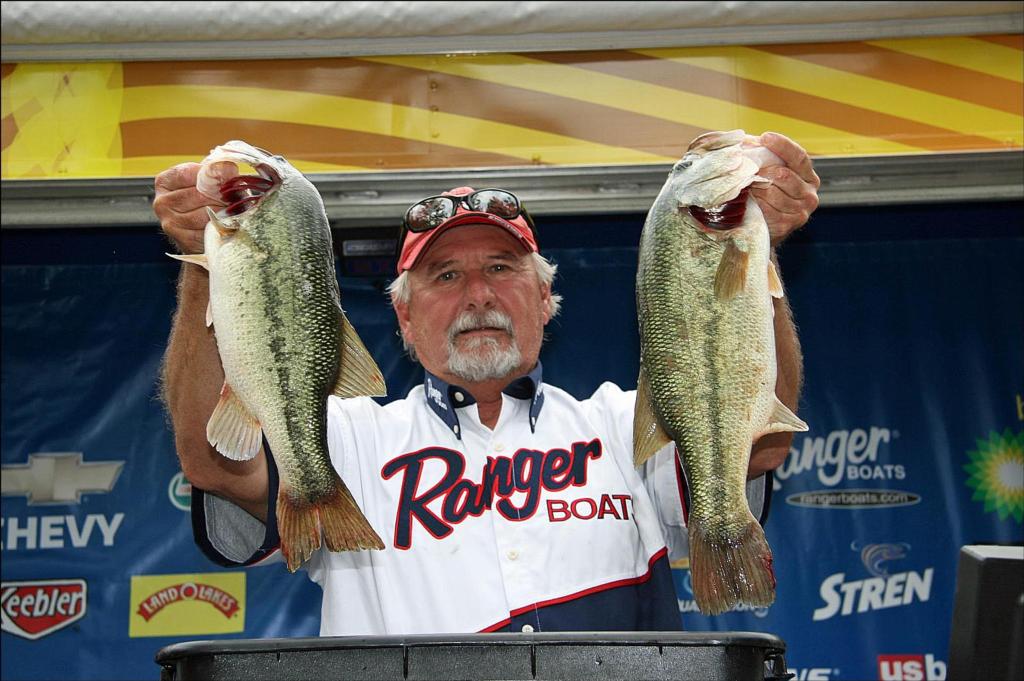 He weighed a smaller bag than he did on day one, but pro leader Tommy Ellis held on to his top spot. Photo by David A. Brown.
Co-angler Somrek on top of his game and his division
May 8, 2009 • David A. Brown • Toyota Series

Rain clouds started building shortly after the launch and by late morning, isolated thunderstorms started unleashing their fury over the lakes. Most were short lived, but a fierce system ripped through the area around midday, lashing mostly across the lake’s lower end, but pruning trees throughout western Kentucky.

Missouri pro Ken Young said the rough weather gave him and his co-angler a wild ride. “When that 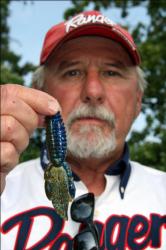 storm came through, it spun us around and pushed us up against the shore. A tree fell on my boat and when we went to turn around, another tree fell on the other end of the boat.” (The trees did not severely damage Young’s boat and neither competitor was injured.)

As was the case for day one, the second round of competition saw anglers weeding through loads of small fish to find something competitive. Tennessee pro Ben Parker described his day: “My co-angler and I probably caught 100 fish, but it was just 2-pounder, 2-pounder, 2-pounder.” 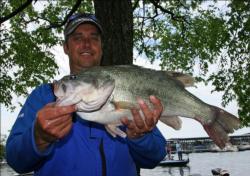 Paris, Tenn. pro Tommy Ellis entered the second round in the top spot with a 24-pound, 4-ounce day one weight. He retained his lead on day two, but with a limit weighing 10 pounds less than his initial effort. Posting a 2-day total of 38-8, Ellis holds a 15-ounce margin over second place pro, Mike Ward.

Focusing on bedding fish, Ellis flipped a Strike King Rodent in the Okeechobee Craw color on a 4/0 hook with a 3/8-ounce Tru-Tungsten flipping weight and Smart Peg. He surmised that the day’s lower light conditions had a negative impact on his productivity.

“We didn’t have any sun at any time today,” Ellis said. “Yesterday, when the sun came out, I’d catch a 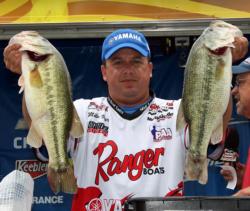 different grade of fish. I think the cloud cover was the difference today. The fish bit all throughout the day. I probably caught more fish today than I did yesterday, but most of them were not keepers.”

Ellis said he found his fish holding tight to cover. “It surprised me – I kept thinking they were going to move out from the bushes and roam with this cloud cover, but they were suspended in the bushes. I (spotted) several fish and they wouldn’t run off. As soon as my bait hit the water, they were on it.”

Ward toughs it out for second place 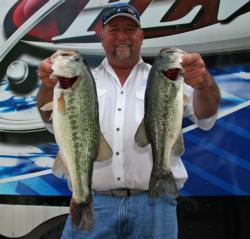 Ward endured heartbreak and hardship, but improved seven spots to second. He paired his 19-5 from day one with another limit weighing 17-10 for a 37-9 total.

Flipping a Texas-rigged Strike King Rodent in the Bama Bug color, Ward got a triple dose of tragedy right off the bat. Nevertheless, he persevered and put together a solid limit.

“I lost three 4-pounders in a 10-yard stretch on my first pass early this morning,” he said. “They were not biting aggressively, plus they were right in the middle of a bush. They were getting wrapped up, my shirt was wet because I laid in the water and dug fish out, I broke rods trying to get fish out.” 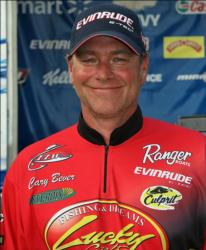 Rounding out the top 10 pro leaders at the Stren Series Kentucky-Barkley event: 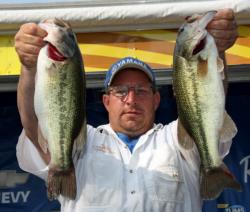 After leading his division by a pound and one ounce on day one, Brian Somrek of Calvert City, Ky., expanded his margin by another five ounces with a 32-pound, 13-ounce total. He bolstered his 18-pound, 1-ounce weight from day one with another limit weighing 14-12.

Much to his delight, Somrek secured his first 5 fish less than an hour after the 6:30 launch. “I was throwing a Rat-L-Trap first thing this morning and had my limit by 7:30. I culled fish all day. We literally caught 100 fish in the first three hours.”

Somrek caught most of his fish over creek mouth rocks in about five feet of water. He also caught fish on a crankbait, a football head jig with a tube and a Texas-rigged Packer Craw. 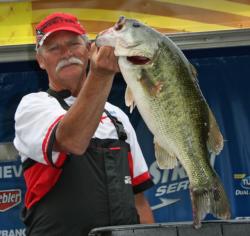 14. William Campbell of Middlesboro, Ky. was fourth with 26-11 and Logan Fulks of Hendersonville, Tenn. ended in fifth with 23-15.

Rounding out the top 10 co-angler leaders at the Stren Series Kentucky-Barkley event: