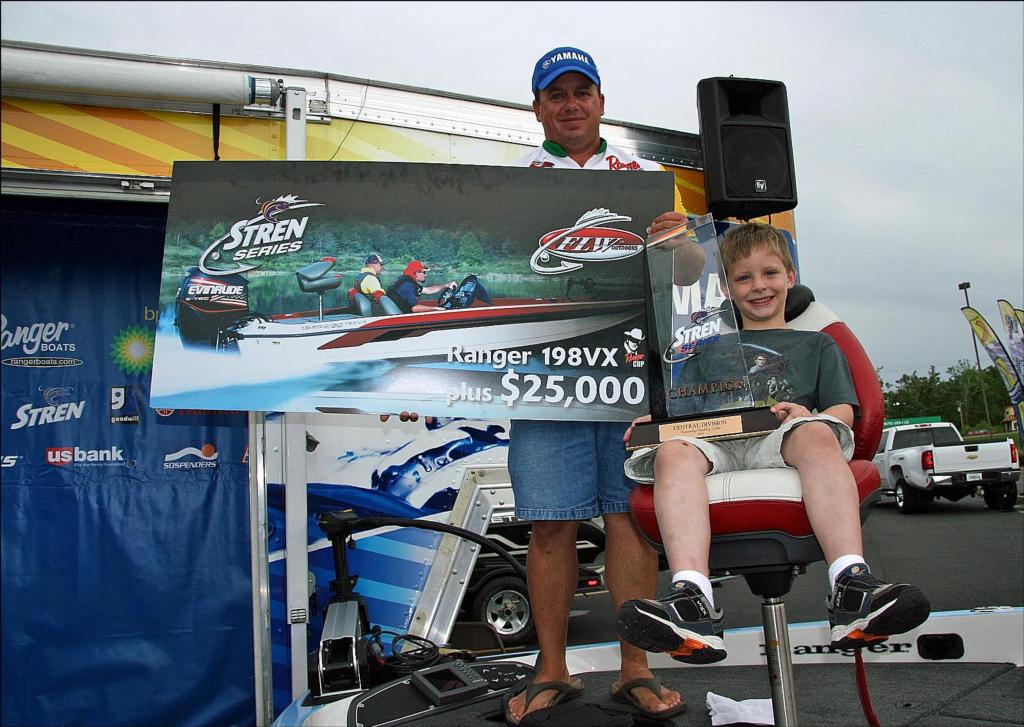 GILBERTSVILLE, Ky. – When Tennessee pro Mike Ward left the weigh-in stage just an ounce shy of taking the lead at the final day of Stren Central Division action on Kentucky-Barkley lakes, he probably wished one of his bass had eaten another shad. Ten minutes later, when he raised the prize check, Ward realized his fish had eaten just enough.

Entering the final round in second place, Ward weighed right after David Young of Mayfield, Ky., whose 20-pound, 10-ounce limit – the day’s largest – had given him the lead with 57-8. Stepping to the scale with a two-day total of 37-9, Ward needed an even 20 to take the lead. By that expectation, his 19-15 seemingly fell just a baitfish short. However, by tying Young and holding off day-two leader Tommy 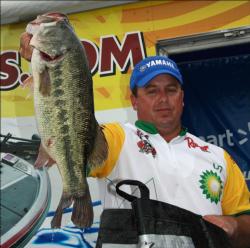 Ellis, who weighed last and took fourth with 54-3, Ward earned the victory through his higher day-two ranking. Saturday marked Ward’s second Stren Central win, the other having come from Kentucky Lake as well.

During a tournament that saw anglers, including Young, catching quality fish on deep structure, Ward stuck with flipping the buck bushes with a Texas-rigged Strike King Rodent in the Bama Bug color. The decision, he admitted was partially by default. 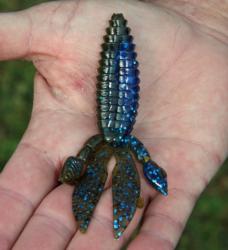 “I threw a BangOlure about three times, I threw a spinnerbait about two, a crankbait about five casts and a Strike King Rodent probably 369 casts. I like the Rodent because it’s soft, and the way the fish were eating, you could hardly feel the bites. I think they were holding on to the Rodent longer because it’s soft.”

Ward targeted classic backwater spawning habitat with clear water. His ideal scenario was a single buck bush with a gap in the middle. Dropping his bait in a dead-stick presentation with the occasional wiggle worked best.

Ward started the event with a 19-pound, 5-ounce limit that earned him ninth place on day one. He moved up seven notches to second on day two with 17-10. His 57-8 total earned him $25,000 and a Ranger boat, motor and trailer package.

While many of his competitors pounded the buck brush, Young spent most of his time working ledges 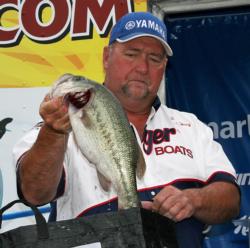 for postspawn fish. Slinging a Norman and Lucky Craft crankbaits in chartreuse and blue, Young did not have a fish in the boat at 9:30, but day two saw his spots turn on later in the morning, so he was confident he’d fare well in the final round.

“I had a good week because I got to do what I love to do,” Young said, earning $10,000 for second. “I did flip some, but what I like to do is get a crankbait in my hand and go. The fish were in the bushes so good that (many anglers) were fishing the bushes. I just knew that the first waves (of postspawn bass) were coming out.”

Fishing his baits on 12-pound Gamma fluorocarbon line and loosening his reel tension enabled the long casts that were vital to his productivity.

“That’s the whole key – getting the bait out as far as you can, getting it down to the bottom and keeping it there for long periods of time.” 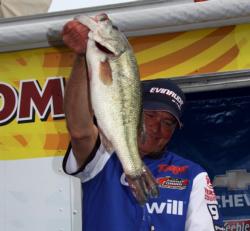 Rhinelander, Wis., pro Cary Bever was Mr. Consistency for the first two days of competition by weighing consecutive bags weighing 18-6. His day-three limit of 17-13 wasn’t far from the trifecta, and it was still enough to bring him up one spot to third place with 54-9 worth $8,000.

“I had to do some scrambling this morning because the lake had muddied up so bad down south,” Bever said. “I ran all the way down there before I realized it wasn’t going to get any flatter. I was able to put a few things together and come up with a decent sack.”

Throwing mostly a Lucky Craft crankbait, Bever said he kept busy with Kentucky Lake’s abundant bass: “I’m going to have to get a finger transplant when I go home because I don’t have any fingerprints left from all the fish I’ve caught. The FBI wouldn’t get anything out of me.” 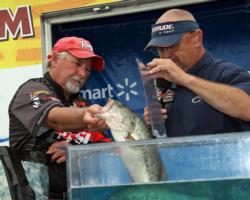 Rodent in the Okeechobee Craw color. Storms during the previous day and evening had left his spots muddy, so Ellis turned to cranking. Working Strike King Series 3 crankbaits (sexy shad color) at the mouths of feeder creeks with cleaner water flowing into backwater spawning bays, he caught a limit weighing 15-11 and ended up fourth with a total of 54-3 worth $7,000.

Powers pops up to fifth 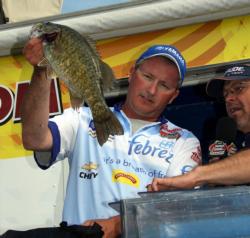 Early May on Kentucky Lake is Pop-R heaven for Rockwood, Tenn., pro Craig Powers, but he candidly admitted falling smitten with another local attraction.

“In the first week of May, if there’s a better place to fish Pop-R’s, you’re going to have to prove it to me. But after this week, I might have to change (that view.) I can see how everyone gets addicted to Kentucky Lake ledge fishing. My hands are torn up from catching so many bass.”

Rounding out the top 10 pro leaders at the Stren Series Central event on Kentucky-Barkley: