Bass in transition in cool water, scattered throughout massive system 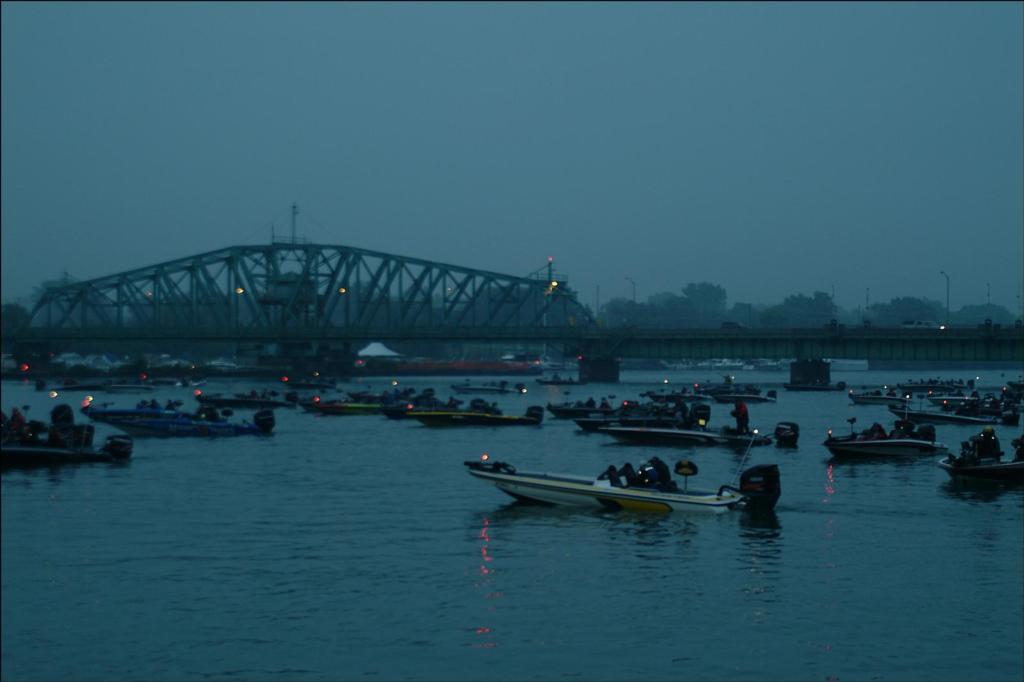 It was a busy scene on the Detroit River at Elizabeth Park Marina as day one of the Stren Series Central Division tournament got underway. A total of 165 pros and co-anglers are entered in the second event of the season in the Central Division. Photo by Vince Meyer.
July 23, 2009 • Vince Meyer • Toyota Series

TRENTON, Mich. – Rivers are notorious for throwing curves at competitive anglers. Fish are here one day and gone the next. Sometimes they aren’t in expected locations at all.

When a river links two major lakes with another river, it makes for an interesting venue for a bass tournament. When the water temperature throughout the system is cooler than normal, it gets even more interesting.

That’s the setting at the start of the Stren Series Central Division tournament on the Detroit River. A field of 165 pros and as many co-anglers launched Thursday morning in light rain for the first day of a three-day event that will land the top pro and top co-angler about $65,000 and $35,000, respectively.

The field is down a few boats from full. Part of the reason is that the system, which includes the Detroit and St. Clair rivers and Erie and St. Clair lakes, isn’t fishing like it’s supposed to in late July, said Brian Hensley, a pro from Edwardsburg, Mich., who has six top-10s in Stren Series and BFL events on the Detroit River.

“It’s been tough to find consistent groups of fish, and a lot of guys don’t want to deal with that,” said Hensley, who’s still looking for his first win here. “If you asked me if I had a spot where I could catch a good sack, I’d say I’m having a hard time finding a spot where I can get a limit. Well, I can always pull at least 11 or 12 pounds, but on the Detroit River that won’t get it done.”

In 2007, when Stren Series tournaments went for four days, Michael Trombly of Perrysburg, Ohio, won with 79 pounds. His weight after three days was 59 pounds, an average of 19 pounds per day. Last year the Walmart FLW Tour had a qualifying event on the river, and Alvin Shaw of State Road, N.C., had 41 pounds after days one and two and another 40 pounds after days three and four, an average of 20 pounds per day.

That’s what Hensley expects will be needed again, despite the fact that the water is about 5 degrees cooler than average for this time of year, and the bite isn’t what it should be.

“Even with the poor conditions, somebody will find good fish,” he said. “If I had to pick one guy, it would be Mike Trombly. He knows (Lake Erie) so well.”

Hensley said he expects most of the field will focus on Lake St.Clair, despite Erie’s reputation for bigger bass. The best area on Erie is around Pelee Island and that’s a 35- to 40-mile run, which is tough in rough water. Today, however, winds are expected to be in the 5- to 10-mph range, which might convince a few more anglers to give it a try.

The Detroit River itself isn’t expected to be a primary destination, Hensley said, because at this time of year, it has mostly largemouth bass. To win this tournament will require heavy sacks of smallmouths.

“I’ve heard a few guys have been catching some good largemouths,” Hensley said, “but getting them two to three days in a row is tough. They just don’t replenish in the river fast enough. But don’t be surprised if you see a 17- to 18-pound sack of largemouths come through.”

“I have five boxes with nothing but tube jigs,” Hensley said. “Good colors are watermelon, green- 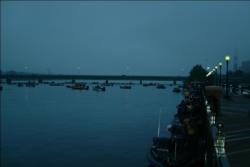 Another take on the tournament

Scott Emery of Livonia, Mich., is another pro who’s had success on the Detroit River, with four top-10s in Stren and BFL events.

“The fishing’s been pretty good the past couple weeks, even though the fish are in transition right now,” Emery said. “But tournament fish are hard to come by. You can get a solid sack, but those tournament-size bass are scattered.”

Emery said it will take 17 to 18 pounds per day to make the top-10 cut. Pros to watch for are Trombly, Steve Clapper and Dave Reault, he said.

Anglers can weigh five fish per day. Emery said he expects the winner will bring 15 smallmouths to the scales over the three-day event.

“There are good, quality largemouths is Lake St. Clair and the river,” he said, “but they run smaller. Putting together a good-sized limit of largemouths isn’t something that’s done regularly around here.”

Reaction baits, crankbaits and jerkbaits are getting the bigger fish right now, Emery said, while tube jigs and drop-shot rigs are catching the numbers.

This is the second Stren Series Central Division tournament of the season. Mike Ward of Paris, Tenn., won the opener in May on Kentucky and Barkley lakes.

The Stren Series Championship will be on Pickwick Lake in Florence, Ala., Nov. 5-7.

Pros are fishing for a top award of about $25,000 plus a 198VX Ranger boat. The monetary award is based on a full field of 200 boats and this tournament has 165. The winning co-angler will get a 177TR Ranger boat.

Forecast: rain this morning and thunderstorms this afternoon; high of 71 degrees; wind NW at 5-10 mph; chance of rain 80 percent; rainfall totals up to a half-inch