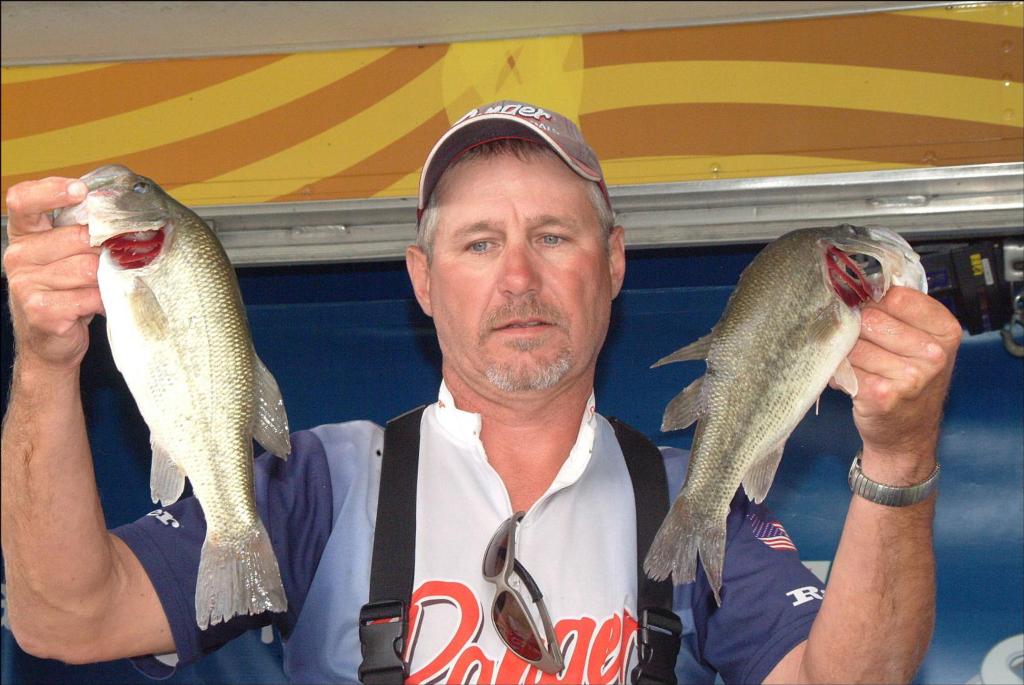 FORT MADISON, Iowa – The rains returned, water levels dropped, the wind was unruly and for a second day in a row the difficult fishing conditions that have plagued anglers all week on the Mississippi River couldn’t shake Dick Shaffer from atop the leaderboard. Bolstered by a two-day catch of 18 pounds, 7 ounces, Shaffer stretched his 1-pound cushion to a nearly 3 full pounds by the end of Friday’s round of action.

However, although Shaffer managed to extend his lead, he said his day out on the volatile Mississippi River was far from easy.

“It feels good so far,” said Shaffer of his hold on first place. “But it was tough out there today. I only had two good bites all day and I lost two good fish. I also had some engine problems which probably cost me about an hour of fishing time heading back. But at least I made it back.”

With the tough conditions wreaking havoc on weights – only two five-fish limits were caught in today’s competition compared with four in Thursday’s round of tournament action – Shaffer is probably wise to maintain a guarded outlook heading into Saturday’s finals. Throw in the fact that Shaffer is losing confidence in his prime fishing area and it appears that the tournament title is truly there for the taking for the top-10 pros who survived today’s cut.

“I think I’m just about out of fish,” said Shaffer, who continues to target wood in shallow water with a combination of jigs, spinnerbaits, crankbaits and plastics. “Tomorrow I’m just going to bump around in some small, isolated areas and hope they bite. I have a little bit of good water left. But I’m definitely going to live or die by that area.”

Shaffer said that while he’s happy to be in the lead heading into the finals, he knows all too well that the tournament is still a long way from being over.

“I’ve also led tournaments before,” said Shaffer. “But the key is to be leading on the day that really counts.”

Despite only bringing in two keepers to the scales, Chad Kerr of Burlington, Iowa, maintained his overall second-place standing for the second consecutive day.

“I’ve just glad it was as tough for everybody else as it was for me,” said Kerr, who now boasts a total catch of 15 pounds, 8 ounces. “I didn’t know what to expect out there today. But it was still pretty rough.”

Kerr said he targeted bass in today’s competition using a combination of tubes and ¼-ounce jigs.

“I caught some bass on rocks but the key was finding clean water with some current,” said Kerr.

However, given the fact that the fishing has been truly a test of wills for the full field the entire week, Kerr said he was more than happy with his place in the standings heading into the finals.

“This is my very first Stren Series event as a boater, so it feels great,” said Kerr. “I’ve fished hard all week and fishing in front of the hometown crowd is a bonus. Overall, I’m pretty pleased.” 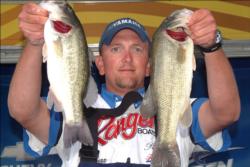 Proving that consistency is key to fishing the Mississippi River, Michael Stetich of Omaha, Neb., used a total catch of 14 pounds, 13 ounces to maintain third place overall in the standings for a second day in a row.

“I’m still trying to cover as much water as I can,” said Stetich. “For the most part, I’ve stuck with my game plan – trying to catch two, three, four keepers every day – so I’m proud of that. And I’ll be using the same strategy tomorrow.”

Stetich said he’s targeting bass in three primary areas using a combination of flipping techniques as well as a Dirty Bait Company jig in a black and blue color.

“Tomorrow I’m going to be fishing those same three areas all day long,” said Stetich. “Hopefully the sun comes out and the winds lay up a little bit. If that happens, I feel good about my chances.” 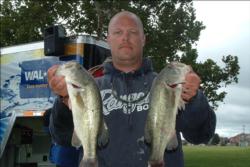 Rounding out the top-10 Stren Series pro finalists were:

Chuck Fiser of Aledo, Ill., won the day’s big bass award in the Pro Division after netting a 3-pound, 15-ounce largemouth. Fiser won $225 for his efforts.

Languishing in a tie for 100th place overall with a total catch of 0 pounds, Brad Baldwin of Dayton, Ohio, knew that he’d really have to turn on the afterburners in today’s competition if he was to have any chance at all to qualify for today’s top-10 cut. Despite the long odds, Baldwin ultimately produced a 7-pound, 11-ounce catch in Friday’s competition which not only allowed him to qualify for the finals, but also vault him atop the co-angler leaderboard. 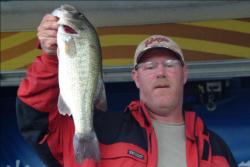 “I just had a great day today,” said Baldwin. “I fish on the Ohio River all the time so I’m used to tough fishing conditions. When you fish tournaments on the Ohio, every fish you catch is important and it’s the same thing here. I also had a great partner and that really helped.”

Baldwin said that he used a combination of crankbaits and flipping techniques to net his catch – the largest stringer turned in by any co-angler this entire week.

“We just beat around here and there and I just happened to catch them,” said Baldwin.

Not surprisingly, Baldwin’s stunning rise up the leaderboard represented one of the finer moments of his young career.

“When you catch 7 pounds, 11 ounces and win the day’s big bass award, you have to feel good about that,” said Baldwin. “Going from 100th place to first just reminds you what you can accomplish if you just keep fishing hard.” 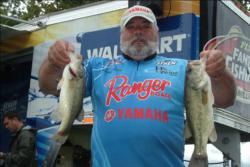 “It’s tough out there. The water is really muddied up and everything we fished in practice we had to throw out because of the conditions,” said Woods. “So I just feel very fortunate that I caught some fish today. I feel blessed.”

With only 1 pound, 12 ounces to his credit after the opening round of competition and only one short fish in his boat with time ticking down in Friday’s competition, Rod Yoder of West Lafayette, Ind., was just trying to get one last bite so he could earn a nice check before heading home. 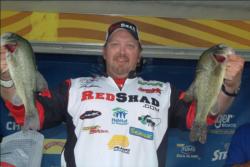 But whether it was perseverance, luck or a combination of both, Yoder ultimately accomplished much more than that.

“It was tough fishing out there today and I was fishing a very frustrating style,” said Yoder. “And honestly, I was just hoping for one key bite so I could make it into the money. At around 1:30 p.m. we went back to a spot where we thought we’d gotten a bite before and I decided to throw a few casts there before we headed back in. But as far as I was concerned, the day was done.”

However, two quick casts and two fish later, Yoder had a whole new lease on his tournament life.

“In the end it turned out to be a beautiful day,” said Yoder, who now boasts a total catch of 6 pounds, 7 ounces. “It feels great. What a way to end the day!”

Rounding out the top-10 co-angler finalists were: