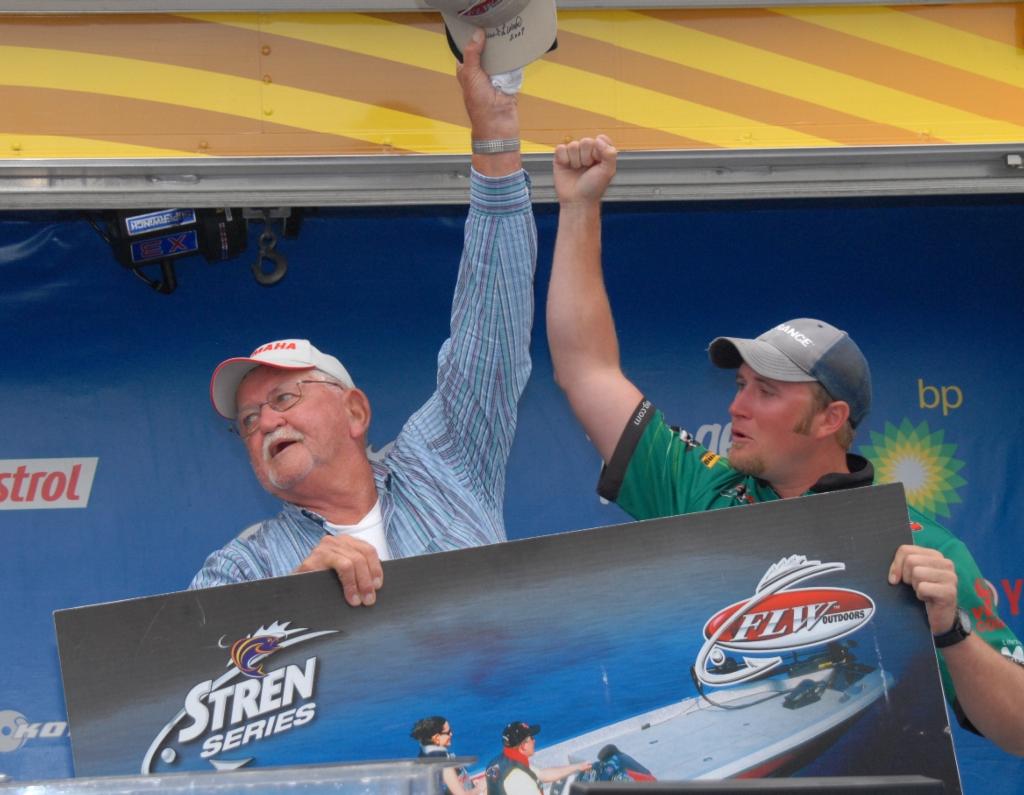 GUNTERSVILLE, Ala. – When people say that anything can happen in a bass tournament on Lake Guntersville, they mean it.

Consider the story of Anthony Goggins of Sylacauga, Ala. He started the final day of the Stren Series Southeast event in 10th place – 8 pounds, 11 ounces off the lead.

Eight hours later, Goggins had sacked up an impressive 17 pounds, 15 ounces – the biggest limit in the Co-angler Division all week – to come from the back of the pack to win the Stren Series event on Lake Guntersville with a three-day total of 38 pounds even.

“This is awesome,” said an emotional Goggins after accepting his win onstage with his grandfather. “This is the biggest tournament I’ve ever won.”

Along with his family, Goggins was also cheered on by a contingent of Auburn University students, including the Auburn fishing team which had competed in National Guard FLW College Fishing earlier in the day. 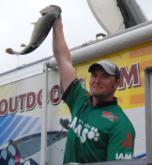 As it turns out, Goggins, a senior at Auburn studying fisheries management, helped start the Auburn fishing team for FLW College Fishing, and his fellow War Eagle brothers were there lending support.

This was Goggins’ first Stren Series event, and during the week he fished with pros Tim Buckner, Eddie Melton and David Gray.

“All week I pretty much threw one thing: a Spro frog in rainforest color,” Goggins said. “I started out with a solid limit early, and then at about 11 o’ clock I caught a 6-pounder; once I dragged it through that mat and got it into the boat, I nearly broke down and cried.”

For his win, Goggins earned a new Ranger 177 TR – something he has been after for a long time. 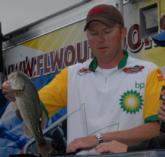 Casey Martin of Huntsville, Ala., finished second with a three-day total of 36 pounds, 13 ounces worth $3,821.

Though Martin used a variety of baits during the week, including a Yellow Magic popper, an RC 2.5 crankbait and Zoom Fluke, by far his best lure was a ¼-ounce Omega Swim Jig, white and blue in color, with a white Paca chunk trailer. He fished the jig on 14-pound-test Gamma fluorocarbon.

“I caught some fish on other stuff, but I’d say 80 percent of my fish this week came on the ¼-ounce Omega jig,” Martin said. “It’s still a prototype jig, but Omega Tackle is going to be putting it on the market soon.”

Classon caught his fish on a black Spro frog tied to braided line.

Sexton, Montgomery round out top five

Sexton reported catching his fish on a hollow-bodied frog and a Berkley Hollow Belly Swimbait.

Rounding out the top 10 co-anglers in the Stren Series event on Lake Guntersville:

Congratulations go to John Skipper of Dothan, Ala., for winning the Co-angler of the Year title in the Stren Series Southeast Division. This year Skipper finished 17th at Okeechobee, 13th at Santee Cooper, third at Wheeler and 53rd at Guntersville for a year-end total of 718 points.