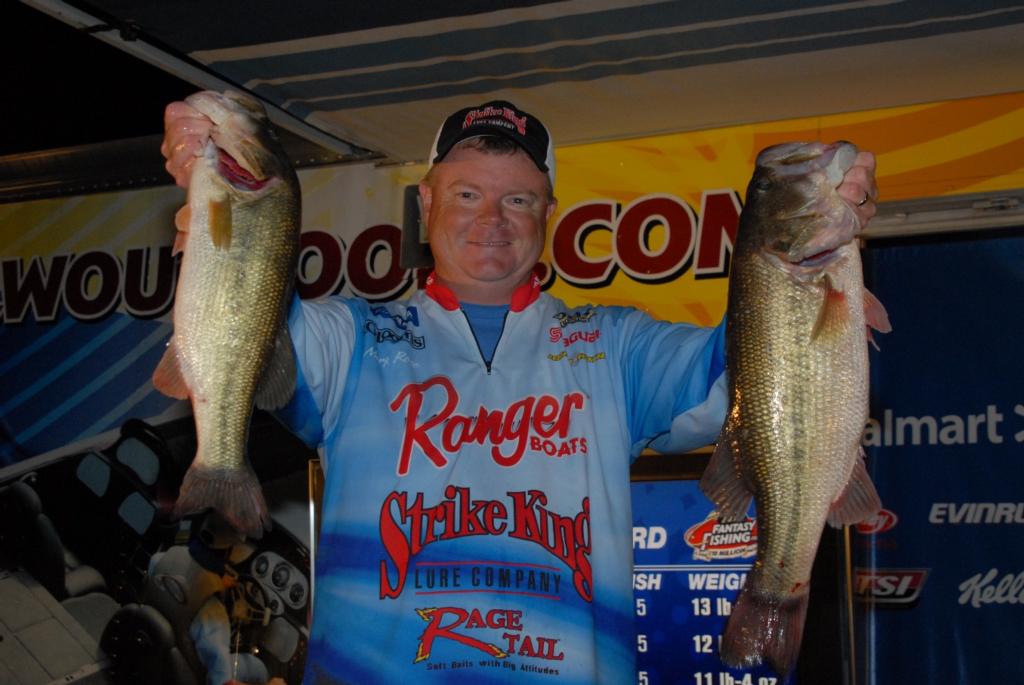 Mark Rose is off to a 22-5 lead in the Stren Series Championship on Pickwick Lake. Photo by Rob Newell. Angler: Mark Rose.
November 5, 2009 • Rob Newell • Archives

FLORENCE, Ala. – When a major league bass tournament comes to Pickwick Lake in the fall, you can bet that Arkansas pro Mark Rose is going to be on fish.

Rose won a Walmart FLW Series event on Pickwick in October 2007. Then in 2008 he lead a team of anglers to victory in the PAA corporate cup event held here in October.

Now Rose is well on his way to earning a kind of Pickwick hat trick by taking the early lead in the Stren Series Championship after day one with five bass weighing 22 pounds, 5 ounces.

Pros’ predictions were right on about Pickwick’s productivity this week. Before the Stren Championship began, many believed there would be a handful of limits in the 19- to 20-pound category, with 15 pounds being in the top-10 cut after day one. And that’s exactly how the day played out.

While Rose has nearly a 3-pound lead, he has a couple of Walmart FLW Tour sticks right on his heels: Jonathan Newton is in second with 19-3, and Dave Lefebre is in third with 19 even.

“I started real close to the launch site here this morning and caught a solid limit weighing about 13 pounds pretty quick,” Rose said of his day. “That got me settled down, and I started working my way down the lake, hitting a variety of different spots. I caught the big one about 11 a.m. far down the lake.”

When fishing Pickwick in the fall, Rose normally drags around in the 18- to 20-foot zone with heavy jigs, but this time around he is fishing shallower.

“Some of the places I’m fishing are just little subtle breaks and rises off the primary flats,” Rose said. “Where I caught the big one today is about 10 feet deep. But some of the places are so shallow I’m catching them on topwaters. My two best places are actually schools of fish – one is real close (to the launch site), and the other is a pretty good run. And in between those two schooling spots, I’ve got a milk run of grass and small drop-offs in the flats. But as this water continues to fall, I’m going to keep checking my deep places, because those should get better as the water drops.”

National Guard pro Jonathan Newton of Rogersville, Ala., is in second place with a five-bass limit weighing 19 pounds, 3 ounces.

Even though the fishing on Pickwick has been pretty good the last couple of years, Newton decided to take a risk on locking up into Wilson Lake today, and it paid off handsomely. He noted that a total of 16 boats joined him in the lock this morning.

“The gambler in me wanted to lock up, and I did,” Newton revealed. “Fishing up there (Wilson) has not been good at all – it’s been way off. I practiced two afternoons up there and never caught a bass. But I went and checked it again the last day of practice, and it seemed like it was getting a little better, so I went for it this morning.

“It was not easy by any means,” he continued. “I only got seven bites, but they were all the right ones.”

And just because Newton caught his fish in Wilson today does not mean he is going to spend the rest of the week up there.

“Pickwick’s been awfully good lately, and I’ve got some good spots on it, so it’s not like I’ve completely written it off,” he added. “I might even fish down here tomorrow, but I’m going to wait until the morning to make that decision. I made my decision to lock up this morning at the very last minute – in fact I was the last one in the lock. And that’s the way I’m going to play it in the morning; I’m just going to wait and see what my gut tells me.”

Lefebre is fresh off a huge win at the PAA Championship in Texas, so he feels the momentum from that win.

“Yeah, I believe in momentum in that way, but I also think it has a lot to do with comfort zones, and one of my comfort zones is post-frontal conditions like we’re having here,” Lefebre said. “Post-frontal conditions tend to make things tougher. If this tournament had been last week, the weights would be double – everybody would be catching them. But after that front went through, things got tougher, and I like that.”

As for his fishing on Pickwick, Lefebre also noted that he has had to change his approach due to the influx of grass.

“I used to come here and fish hard structure offshore,” he said. “But that’s not so much the deal anymore. You can still catch fish that way, but the grass has been here about three years, and the fish are starting to relate to it a lot more. Most of the places I fished today were grass-related. I caught a solid limit early – maybe 15 or 16 pounds – on a schooling spot in about five casts, then I went and played in the grass to cull up.”

Keith Pace of Monticello, Ark., is in fourth place with a five-bass limit weighing 18 pounds, 5 ounces.

Pace spent time in both lakes today, locking up into Wilson and then locking back down into Pickwick.

“I probably caught about 12 pounds up in Wilson and then locked backed down here about 11 o’clock,” Pace said. “I had a couple of places where I caught some big fish pretty close here, and I culled up three times down here in Pickwick.”

Pace noted that his fish are all current-related, and he is not fishing grass at all.

“Some fish are coming shallow power-fishing, and others are coming out deep with finesse lures, but they are all set up in the current,” he added.

Robert Robinson of Mobile, Ala., rounded out the top five in the Pro Division with a five-bass limit weighing 16 pounds, 9 ounces.

Rounding out the top 10 pros in the Stren Series Championship on Pickwick Lake after day one:

George Yund of Albany, N.Y., caught a five-bass limit weighing 13 pounds, 2 ounces to take the day-one lead in the Co-angler Division of the Stren Series Championship.

David Kayda of Crosby, Texas, is in second place in the Co-angler Division after day one with five bass weighing 12 pounds, 4 ounces.

Mark White of Tucson, Ariz., caught a five-bass limit weighing 11 pounds, 4 ounces to grab the third-place position in the Co-angler Division after day one.

Jeff Grant of La Mirada, Calif., is in fourth place with 11 pounds, 3 ounces.

Mike Power of Canyon Lake, Texas, caught the Folges Big Bass in the Co-angler Division on day one. It weighed 5 pounds, 13 ounces and netted him $250.

Rounding out the top 10 co-anglers in the Stren Series Championship on Pickwick Lake after day one:

Day two of the Stren Series Championship on Pickwick Lake will begin Friday at 6:30 a.m. from McFarland Park located at 200 James Spain Drive.