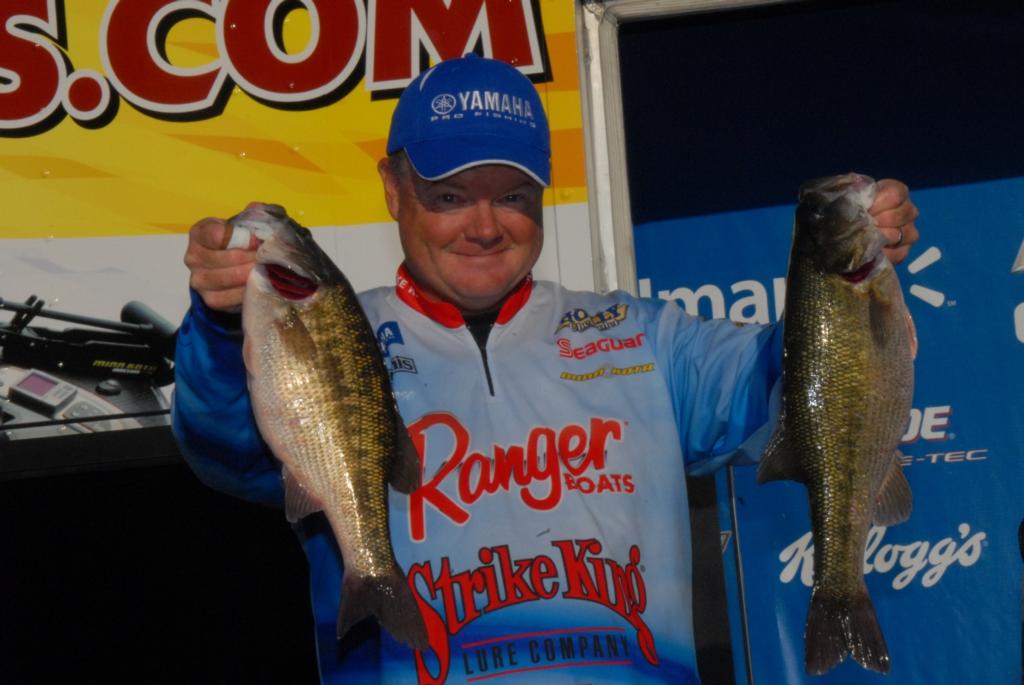 FLORENCE, Ala. – As the day two weigh-in of the Stren Series Championship drew to a close, a common theme came to light: the top three leaders are not spending much time fishing on Pickwick.

Despite Pickwick’s return to favor with many anglers due to vastly improved fishing over the last few years, it became apparent that some of the leaders are getting out of Pickwick proper to do their damage.

Mark Rose of Marion, Ark., who leads the event with a two-day total of 37-11 sheepishly admitted to catching his fish in Bay Springs Lake today. One of the big give-aways to his location was a giant 4-4 spotted bass he held up on stage.

In all fairness, Rose did catch a decent limit of bass in Pickwick on day one before making the long run down the lake to Bay Springs Lake, a small clear-water impoundment that connects to Pickwick via the Tombigbee Waterway.

But after an hour-long fog delay this morning, his morning schooling hotspot offered up just one 12-inch bass and Rose pulled up the stakes and headed to Bay Springs where he finished out a 15-pound, 6 ounce limit.

“That’s part of professional fishing, though” Rose continued. “When you have big fields with good anglers on good fisheries like this that’s going to happen. It’s just something we as pros have to deal with and I’ll just have to deal with it the best I can. The best thing I can do is stay positive and make the most of it.”

Rose noted that he made the commitment to Bay Springs after he realized that the pressure on the traditional good places in Pickwick was taking its toll. He felt like that the long run to Bay Springs would keep it from getting beat up too bad.

“The best day I could put together on Pickwick was about 14 pounds, which is about what I caught yesterday before making the long run,” he added. “But I got some bigger bites down there and decided that’s where I needed to be. I get a lot less bites down there – it’s a real grind – but the average fish seems to be a little better quality.”

National Guard pro Jonathan Newton of Rogersville, Ala., is in second place with a two-day total of 35 pounds, 7 ounces. 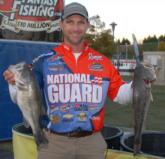 “I’m flipping a jig on bluff walls in the current and I lost a couple of good ones today,” Newton said. “The problem is feeling the bites in all that fast current. It’s kind of a guessing game as to whether one has it or not. Sometimes I jerk and there’s nothing there and other times I hesitate just a little too long and feel one tug it before letting it go. But I ended up connecting with nine keepers today and I plan to go back to Wilson tomorrow.” 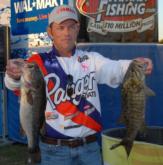 Keith Pace of Monticello, Ark., is in third place with a two-day total of 35 pounds, 7 ounces.

Pace, too, is also escaping the confines of Pickwick by locking up into Wilson.

“That fog delay was a little costly today because it really cut into the best time when they’re biting best for me up there,” Pace said. “I’ve got a pattern going that includes shady banks and current and by the time we got up there this morning, the shady banks were just about gone.”

Pace noted that he is using the shade cast over the heavy current to compensate for the clearing water.

“The water is clearing up by the day up there,” Pace said. “It started out stained earlier in the week but each day it gets clearer so I’m fishing those dark shade banks early before the sun gets up.”

Lloyd Pickett of Bartlett, Tenn., is in the fourth place spot with a two-day total of 31 pounds, 13 ounces.

Pickett is the first of the leaders actually staying in Pickwick Lake. He’s fishing down in the Yellow Creek area, doing what he loves to do: dragging a jig and a Carolina rig in 15 to 19 feet of water on deep structure. 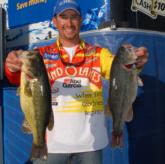 Defoe is staying in Pickwick, fishing current in the main river by flipping and cranking the swift water.

“The difference today was that I just got a few more in the boat,” Defoe said of his better catch. “I should have had that kind of weight yesterday but I had some mishaps and a couple got off. But that’s the way it goes flipping junk on the bank in heavy current. It’s hard to feel the bites because the bait is down in all the stuff and there’s a big bow in the line from the current – it’s hard to catch every bite when it’s like that.”

One major advantage Defoe has is that he is fishing close. Another long fog delay in the morning combined with an early 2 o’ clock check in for the pros and he could really maximize his fishing time on the last day.

Rounding out the top-10 pros in the Stren Series Championship on Pickwick Lake after day two:

7th: Scott Canterbury of Springville, Ala., two-day total of 30-6

Day three of the Stren Series Championship on Pickwick Lake will begin Saturday at 6:30 a.m. from McFarland Park located at 200 James Spain Drive.