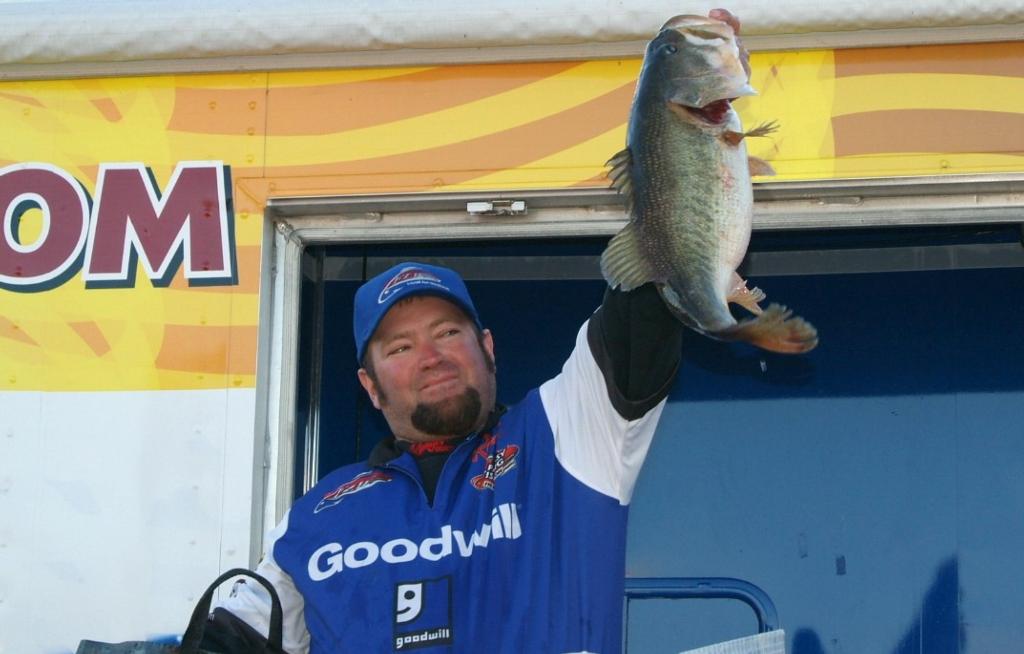 ZAPATA, Texas – For the diehard angler, a trip to Falcon Lake is a once-in-a-lifetime experience. For Michael Yoder, that is a severe understatement. His past three days on the legendary Rio Grande River impoundment will never be forgotten.

Yoder’s week can best be described as a rollercoaster filled with peaks and valleys. He launched his boat Thursday morning knowing that his only reliable spot was located 18 miles south of the takeoff site on the Mexican side of the lake near the dam. He also knew the forecast called for dangerously high winds out of the north. Thankfully, he reached his primary area without too much difficulty.

Once he got there, he tied into some amazing fish – 38 pounds, 4 ounces worth of Falcon Lake bass to be exact. But he knew the ride back would be brutal. Battling giant waves, Yoder wrecked just about every piece of equipment on his boat from his trolling motor to his graph to his livewell pumps. But at the 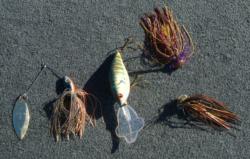 end of the day, he was in safe and had accumulated a 9-pound lead.

“My boat was a mess when I came in, but I have to thank Ranger for staying up with me until 10:30 Thursday night making sure I would be ready to go Friday morning,” he said.

Day two saw colder conditions and slightly diminished winds. Once again, Yoder ventured south – braving the elements. As the temperature plummeted, the bite slowed. Instead of throwing the tilapia-pattern crankbait (made by 6th Sense Custom Tackle) he used on day one, Yoder was forced to go to a jig. His jig of a choice was of the football-head variety and was hand-tied by the company Fish Diffee. He tipped it with a Gene Larew craw in green pumpkin color.

The result was another solid limit weighing 27 pounds, 11 ounces. With much calmer conditions Saturday, he started fishing shallow scattered rocks in his primary area but the bite was off. He scrambled around some and eventually returned to his sweet spot shortly after noon only to find commercial tilapia fishermen occupying the area. Rather than panic, Yoder went with a gut feeling and started Carolina rigging with a Zoom lizard out deep.

“There was a nearby island and I basically just started dragging until I felt brush,” said Yoder. “I found them stacked up in one spot that was about 25 feet deep.”

At 2:35 p.m. the Texarkana, Ark., pro tied into his fifth and final keeper – a Falcon Lake beauty that weighed nearly 8 pounds and pushed his final-day stringer to 27-9. At the time, Yoder was thinking that specific fish sealed the deal on his first victory. 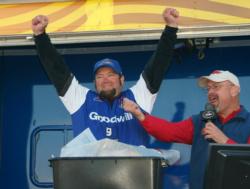 What transpired next was a mad scramble of switching batteries and matching black wires with black wires and red wires with red wires. The engine eventually started and he was able to check in with a few minutes to spare.

“I’m applying as a mechanic at NASCAR next week,” quipped Yoder.

Yoder then reflected on his first American Fishing Series event as a pro.

“What a week. There have been a lot of ups and downs. But it’s all been worth it.”

“It feels incredible to be up here but there’s a lot of friends and family that helped me get here.’

Imagine catching 41 pounds on the final day of a tournament and not winning. That’s what is running through Keith Combs’ mind right now. His official day-three weight from Falcon was 41 pounds, 1 ounce. Not only was 41-1 his personal best, it was also the heaviest single-day catch in FLW Outdoors 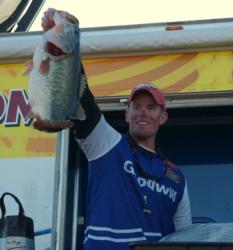 history. The smallest fish in his creel weighed nearly 8 pounds and his biggest weighed almost 10.

“It was a great day from start to finish,” said the Del Rio, Texas, pro who guides on both Amistad and Falcon. “We were blessed with great weather for a change and wow that was fun. I couldn’t wait to weigh them in.”

Combs said he caught one of the giants on his second cast of the day and they hit approximately every 20 minutes after that. Ironically, his big sack came within sight of the Zapata County Boat Ramp. He fished the same area on day two, but minor adjustments made all the difference.

That road bed, which was in approximately 12 feet of water, was a migratory route for both pre- and postspawn bass. The road bed ran across a giant flat to the main river channel. While several other anglers were working the channel, Combs had the road bed to himself.

To catch his fish, Combs used mostly a Carolina rig with a Zoom Brush Hog. Occasionally he mixed in a spinnerbait. He said the key to his success was the area and his Power Tackle rods, which allowed him to quickly draw the mean Falcon Lake bass out of the brush.

Combs’ consolation prize was $8,000. He more than likely won’t be fishing the next Texas Division event. Instead, he’ll be practicing for the FLW Tour season opener on the Red River. 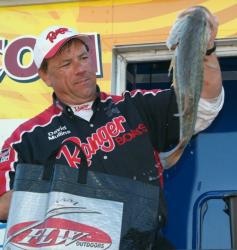 Throughout the week, Mullins alternated between fishing deep and shallow. But whatever depth he worked, he stuck with a Brush Hog as his bait of choice. When shallow he flipped it and when deep he drug it with a Carolina rig. To illustrate the point, one of Mullins’ day-three keepers came from 2 feet of water and another came from 60 feet.

His primary area was located on the south end of the lake. On days one and two the ride back to weigh-in was wicked and he was glad to be in a 21-foot Ranger.

“It wasn’t fun, but we got back,” Mullins said.

Morton, Cremo round out top five

In fourth place was Etoile, Texas, native Justin Morton with a three-day total of 70 pounds, 5 ounces. After sticking 25-8 and 23-9 on days one and two, Morton managed 21-4 on day three. While most of the pros were employing plastics, Morton used a crankbait.

“I was ripping a Norman DD-22 just like I would rip a Rat-L-Trap through the grass at (Sam) Rayburn,” he said.

Richard Cremo dropped from second to fifth after managing only two bass worth 9-13 Saturday. He finished the event with a total weight of 68 pounds, 7 ounces – worth $4,500. Like Morton, this was Cremo’s first time making the cutoff.

“I never expected anything like this,” Cremo said. “I’m just thankful for the opportunity.”

Cremo fished six miles northwest of the boat ramp and worked a point in 12 to 15 feet of water. He used three baits – a spinnerbait, a Carolina rig and a jig.

Rounding out the top 10 pros at the American Fishing Series Texas Division event on Falcon Lake:

The next American Fishing Series event will take place Feb. 4-6 on the Sam Rayburn Reservoir in Jasper, Texas.