Taylor takes over lead on Lake of the Ozarks

Penix pushes ahead in Co-angler Division 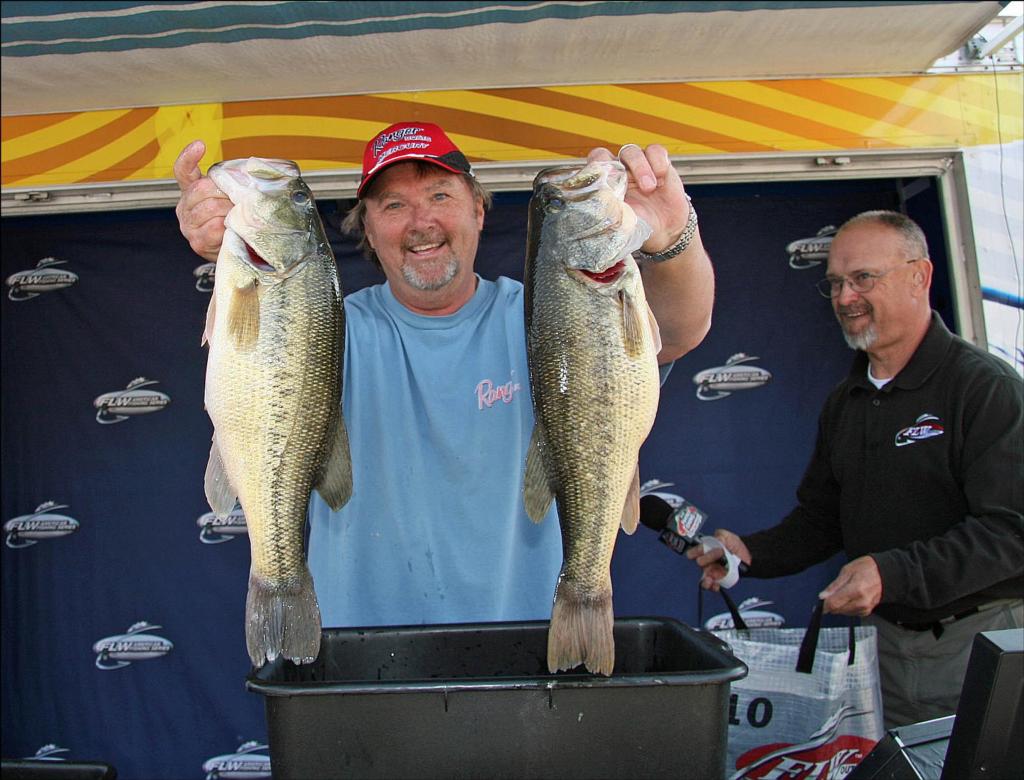 After catching the biggest bass of Day One, Bub Taylor moved into the pro division lead on Day Two. Photo by David A. Brown. Angler: Bub Taylor.
March 19, 2010 • David A. Brown • Toyota Series

OSAGE BEACH, Mo. – Lucking into a good bite now and then is one thing, but when you’re “on” good fish, it’s quite another. Bub Taylor seems to fit the latter scenario as he took the day-two lead at the American Fishing Series Central Division opener on Lake of the Ozarks.

Hailing from Tontitown, Ark., Taylor started his campaign with a sixth-place catch of 13 pounds, 9 ounces on day one. His bag included the day’s big bass – a chunky largemouth that went 7-7. Taylor backed that up today with another limit of 16-10 caught on jerkbaits.

“I love a jerkbait – I just about live and die with one,” he said.

Working from the Gravois Arm back to Grand Glaize, the pro positioned his boat in 20 to 25 feet of water and cast toward the shoreline. He said that tweaking his lure for a creeping descent accounts for part of his 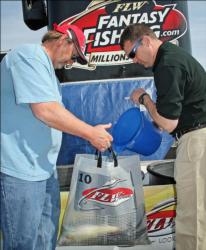 success. The right action makes up the rest.

“I’m jerking (the bait) very slowly. I’m not even moving it (forward) when I twitch it. It’ll take me three minutes to work one cast in.”

Like most who favored the jerkbait, Taylor lamented the lack of wind on day one. Today saw rustling trees and more ripples on the lake surface.

“The wind helped,” Taylor said. “It blocks the sun a little bit, and it brings the baitfish up on those windy banks. If I can get on the right one, I can catch fish. I had both of my big ones and another one that I culled with on the same point.”

Taylor and the rest of the top 10 finalists will see plenty of wind – along with wet conditions – on day three. A cold front sweeping across the central states will bring light morning showers that intensify throughout the day. Winds will shift to the northeast at 15 mph. Day three will be much colder than the previous two, with daytime highs expected to peak at 38 degrees. 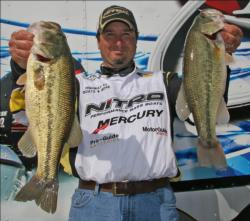 Shawn Kowal of Linn Creek, Mo., got off to a strong start with a day-one limit of 15-12. He held his position on day two and kept himself in contention with another limit – this one weighing 13-6. Kowal currently sits 1 pound, 1 ounce off the lead with 29-2.

Targeting specific notches in the shoreline contour, Kowal fished custom-painted Megabass jerkbaits. Although he changed nothing from his plan for the first day, his second limit required much more work. Kowal said he believes today’s bright conditions may have done him ill.

“Today, I just couldn’t catch any quality fish – I never had a quality fish on,” Kowal said. “I think the sun moved the fish around.”

Kowal said the key to scratching out a solid limit was to keep moving: “I probably hit 50 spots today. I went all the way to the back of the Gravois (Arm).”

After placing third on day one with 15-11, Earl K. Garrison IV of Bull Shoals, Ark., got a positive response 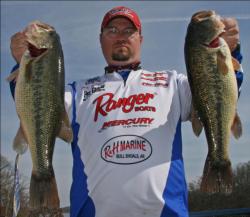 for his marriage proposal to Jennifer Swackhammer. Today, he held on to the No. 3 spot, but the fish’s response was less than warm.

“Actually, today was just a big struggle after the first spot,” Garrison said. “I caught about a 3 1/2-pounder and a 3-pounder on the first spot I went to, and I just struggled all day on places where I caught them yesterday. For whatever reason, they just wouldn’t bite today, so I went back to where I started and caught two more. I had one more place to try, and I went there and caught a keeper about five minutes prior to coming in.”

Like day one, Garrison caught his fish on Megabass jerkbaits, fished mostly around secondary points. His limit of 13-1 gave him a 28-12 total.

Rounding out the top 10 pro leaders at the FLW American Fishing Series Lake of the Ozarks event: 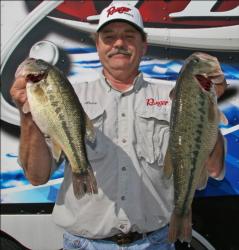 Michael Penix of Lewisburg, Tenn., caught four bass that weighed 12-4 and took over the co-angler lead with a two-day total of 23-4. Penix improved from his fourth-place effort of 11 pounds on day one. He caught all of his fish on a green-pumpkin Zoom Baby Brush Hog rigged Texas style on a 3/0 hook and a 3/16-ounce weight.

Penix said a patient presentation was the key to success: “I was just slowly dragging it. If I felt any cover, I’d just let it lay there, and they’d come up and grab it.”

Penix edged day-one leader Marty Bohlke Jr. of Nixa, Mo., by an ounce today. After posting the tournament’s heaviest catch thus far – a 23-3 bag – Bohlke blanked on day two. Fortunately for him, his huge first-round effort kept him near the top and secured a spot in Saturday’s finale. 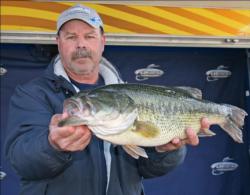 Rounding out the top 10 co-angler leaders at the FLW American Fishing Series Lake of the Ozarks event: