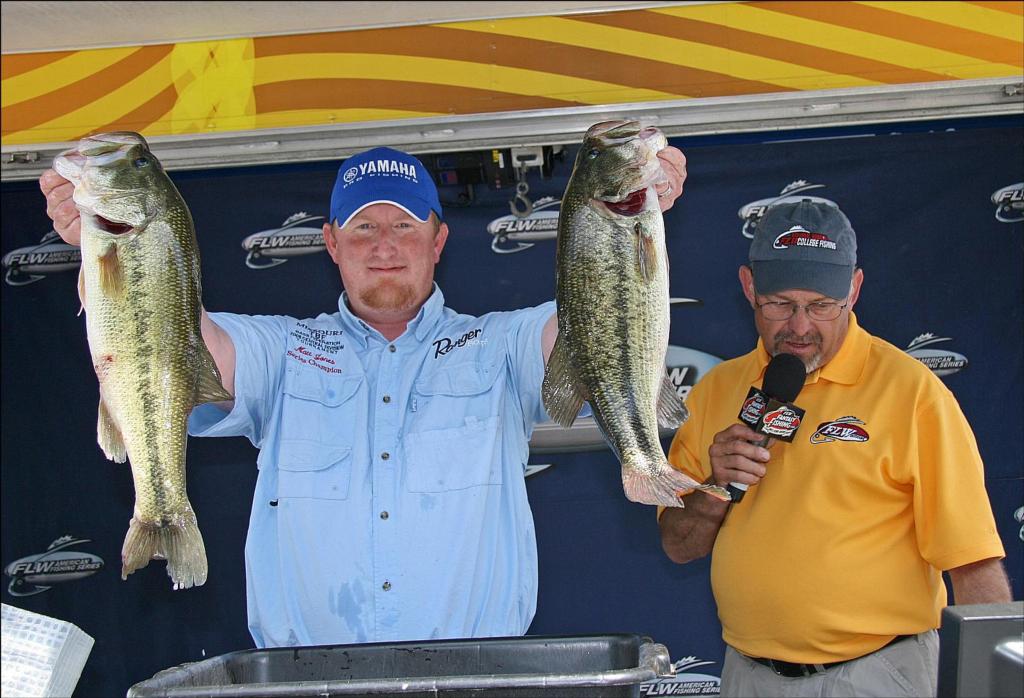 With only minor resistance from a few morning clouds, the sun soon dominated the sky and bright, warm conditions kept the polarized glasses on and the jackets off. A light breeze yielded to an occasionally puffy wind of about 10 to 15 mph, but most raved about a beautiful day on a beautiful lake. 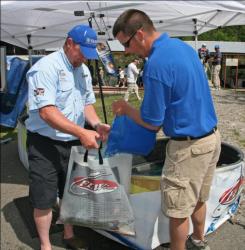 Many reported a good mix of locked-down fish and many others that were still setting up shop. Elsewhere, anglers working deeper water fared well with bass in classic prespawn staging.

Leading the pro field is Matthew Jones of Spokane, Mo., who caught a limit weighing 20 pounds, 4 ounces. Hauling in the day’s only 20-pound bag, Jones fished a Texas-rigged green-pumpkin Zoom Critter Craw with a 5/16-ounce tungsten weight. Jones said that close attention to fish positioning during practice provided the insight he needed for effective tournament presentations. 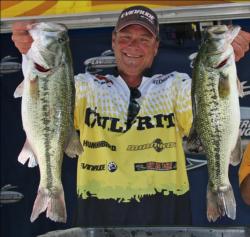 “The key was to mark the beds and try to remember where they’re at so I could stay off of them (during the tournament),” he said. “If you can stay off of them, they’ll usually bite on the first pitch.

“In practice, I covered a ton of water with my trolling motor. I didn’t find a ton of big fish, but the biggest fish I found, I caught today, luckily.”

Although he was pleased with his opening performance, Jones expressed concern over the likelihood of more anglers locating key fish on day two. Cloud cover will increase from midday on, but partly sunny skies will allow plenty of morning reconnaissance.

“My weight and probably a lot of other weights will probably drop tomorrow, but today I was fortunate enough that nobody found the fish I had found, and I caught them,” Jones said.

Bever gets “lucky” for second 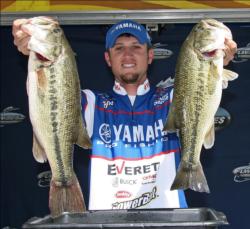 Bever of Rhinelander, Wis., who caught a limit of 19 pounds, 11 ounces. His total, he said, could have been significantly higher had fate not robbed him of his golden opportunity.

“I was flirting with 25 pounds today,” he said. “I had another 6-plus on, and I had her to the boat twice, but it was so big, it ran under the boat and jumped off on the other side.”

Bever said he covered a lot of water today: “If you looked at my GPS, you could follow the trail – I was everywhere today. I caught fish all day. I had my limit by 8 a.m.”

Bever said that his choice of positioning is intrinsic to the game plan he hopes to continue on day two: “I’m doing something different – I don’t have a lot of company where I’m fishing. I’m getting the fish coming and going.” 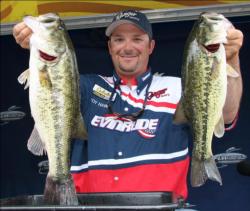 Benton, Ark., pro Stetson Blaylock trails Bever by an ounce at 19-10. Noting that the bite seemed tougher today than it had been in practice, Blaylock caught his fish by flipping a Berkley Power Craw onto beds. The key for him was to focus on the areas that were most likely to hold quality fish.

“I think it was just knowing where the big ones live,” Blaylock said. “Instead of going into the backs of creeks, I’ll fish the mouths of bigger creeks. I think that’s where some of the bigger ones stay instead of going all the way in the back.

“This is a really good lake, and the big ones aren’t everywhere, but there are so many of them here. On some of my areas, some of the big fish moved in today, so hopefully they’ll keep moving in.”

Roy Hawk of Salt Lake City, Utah, took fourth place with a limit of 18-2. He started his day fishing a Lucky Craft RC 2.5 DD and then moved shallow to flip a green-pumpkin Yamamoto craw.

In fifth place with 17-13, Gabe Herington of Malvern, Ark., found success by fishing a Carolina rig over 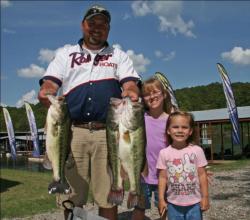 points and offshore structure. He ducked in shallow at day’s end and caught a 3 1/2-pound bass off the bed.

“I’m fishing a little deeper (than most),” Herrington said. “A lot of people are fishing the 8-foot-to-the-bank range, and I’m fishing 8 to 20.”

That’s the thing about spawning season – anyone can catch the big one. Co-angler Arnold Payne Jr. proved this point by catching the day’s heaviest bass of both divisions. Payne’s 6-pound, 1-ounce bass ate a watermelon-colored lizard fished on a Carolina rig. This fish, along with four others, gave Payne enough weight for a fifth-place finish with 12-1.

Topping the Co-angler Division, Emmet Barnett caught a limit weighing 13-2 on a jerkbait. Robert Prebeck of Norwood, Mo., finished second with 12-12, and Arden Damberg of Wheatland, Iowa, took third with 12-8. In fourth place, Jason Scoggins of Benton, Ark., had 12-7.