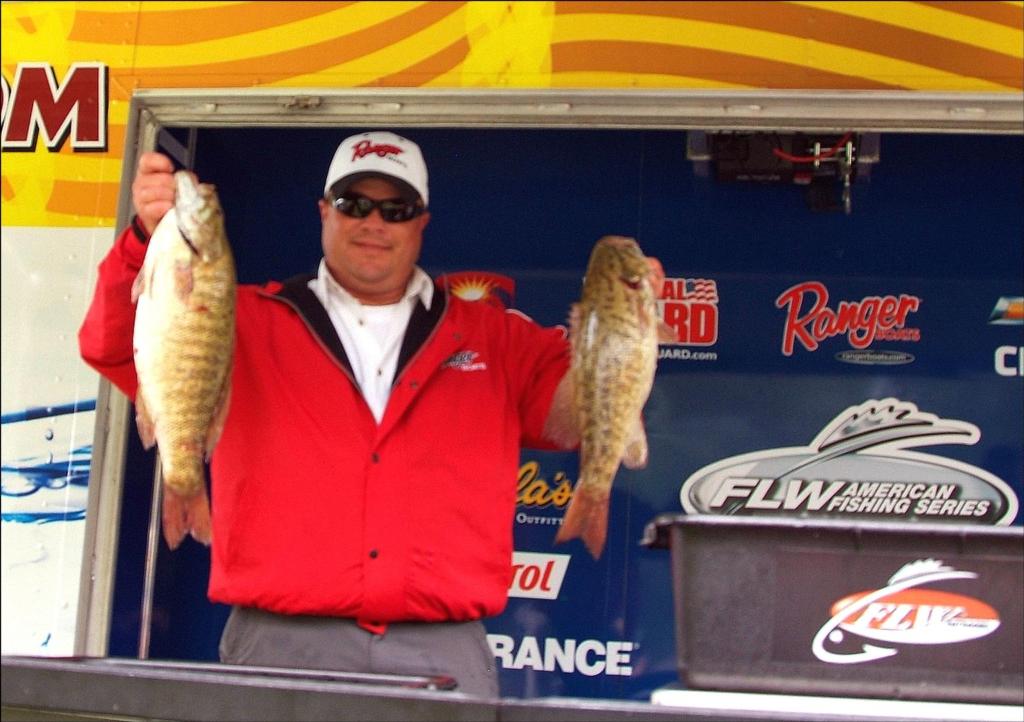 And he did it fishing inside Presque Isle Bay, which wasn’t his plan or where he practiced (competitors were restricted to inside the bay today due to north winds that kicked up 8-foot waves on the main lake). Despite his day-one success in the confines of the bay, he said he’ll head out on the big water Friday if conditions allow.

Wigal, who will benefit from a first-flight takeoff Friday, said, “I have spots picked out (on Lake Erie) … a very long run.”

The limit of smallmouth bass came on “anything and everything I threw,” Wigal said, adding that Carolina rigging a Rapala jerkbait was just one of “about seven different ways” he caught them today – many from rock piles in about 10 feet of water. The 38-year-old pro fisherman was even more tight-lipped about his hot spots, which should make for a great backup plan if his main-lake areas fail him tomorrow. 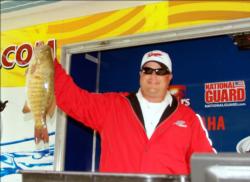 “I went there and planned to catch 12 pounds of largemouth and only largemouth,” he said. “Then I started catching all these smallmouth … I threw four limits back … they really surprised me.”

It should come as no big surprise that Wigal will target smallies tomorrow. His lunker brown bass today weighed 5-9 and earned Big Bass honors worth $146.

Wigal’s nearest competition after day one comes from another Pennsylvania pro: Jamie Ferdarko of Dubois. His limit – two smallmouth and two largemouth bass weighing 13 pounds, 7 ounces – has him 4-4 off the lead. 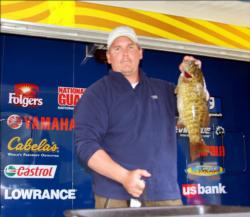 Ferdarko was fishing relatively close to the glut of anglers who congregated “out by the smokestacks,” roughly two miles from the launch site at Presque Isle State Park, but the similarities end there.

“I was fishing shallower than any of the other guys … in about 3 feet (of water)” he said, adding that he only committed one day of practice, Sunday, to inside the bay. “I’ve done well on the bay before. I have a couple key spots that hold fish even when they shut down like they did this week with the [cold] front.”

Ferdarko reported catching his limit by 8 a.m. and said the bite seems to shut down around 10 a.m. and then picks up about 1 p.m. If given the chance Friday, he’ll fish out on Erie, but likely stay with his game plan of following the bigger fish to the shallows.

“I’m cranking; I’m ripping it,” he said of the pattern he discovered Tuesday. “It doesn’t matter what you throw (as far as style or color of crankbait) if you’re at the right depth around weeds and rocks.”

In third place in the Pro Division after day one is Pat Eichmann of Nancy, Ky., with a four-bass limit weighing 12-12. He weighed a mixed bag of three smallmouths and one largemouth.

His practice partner, Don Smith, is leading the Co-angler Division with a whopping weight, and the two found their mutually successful area from day one during practice. Eichmann said it’s an underwater rock jetty or ledge in the channel at the mouth of the bay, just inside of what was declared off limits for today due to the weather restriction.

“There’s probably 20 other guys fishing [there],” he said. “I sat on top of it until I had a limit and then started moving along it.”

Surprisingly, Eichmann said he won’t return to that spot Friday if anglers are allowed to fish the main lake. But he has a good reason. 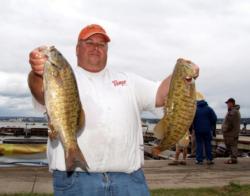 “If we get out on the lake, I’ve got an area there where I can catch anywhere from 20 to 27 pounds of smallies,” he said.

The key for both anglers, according to Eichmann, is line size in conjunction with bait selection. Though he caught most of his fish on a goby creature bait today, he has also found success on a Jackall Cross Tail Shad fished on a drops-shot rig with 1/2- to 1-ounce weights.

“(Smith and I) get 10 times more bites using a smaller diameter line with heavier weights to keep the bait on the bottom,” Eichmann said, adding that he caught his fish today in anywhere from 14 to 20 feet of water.

Roy right behind in fourth

“We roamed around in the bay for absolutely nothing and then worked our way into the channel … in the south end and ran into a pile of fish throwing crankbaits,” he said.

There were about 15 other boats fishing in the same area, and Roy said he’s unsure of whether there’s a morning bite happening there as he didn’t find his fish until about 10:30 a.m. He said he’ll start there again tomorrow before heading out to the main lake, weather permitting.

He caught most of his green fish on crankbaits and most of his brown fish on a drop-shot in about 15 feet of water.

Rounding out the top 10 pros competing in the AFS Norther Division event on Lake Erie:

Smith reigns on day one from back of boat

Don Smith of Brodhead, Ky., achieved an unusual feat on day one of the AFS Northern event on Lake Erie: He not only outfished his pro partner, but the rest of the pro field as well, with the exception of tourney leader Wigal. And Smith managed to outfish his practice partner too: third-place pro Eichmann. 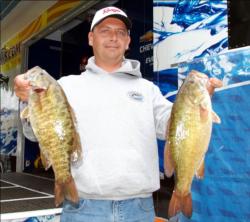 In addition to the Jackall Cross Tail Shad, Smith bagged his bass today on drop-shot rigs and Berkley Gulp baits. He fished the same rock pile as Eichmann as well as along weed edges in 19 to 26 feet of water.

“It was tough today, but my boater [Daniel Welch] was on a good bag that just didn’t work out as well for him,” Smith said. “I had seven or eight keeper bites today; I lost two and culled about two.”

Whether Smith fishes in the bay or in the main lake tomorrow depends upon his pro draw, but it’s likely he’ll have a solid game plan either way.

Arva, Ontario’s Jeff Zeisner and Mt. Airy, Md., co-angler Stephen Semelsberger Jr. are well versed in the ways to succeed from the back of the boat. Zeisner, who placed second in the Co-angler Division today with an impressive 14-9 limit, already has four top-10 finishes under his belt in AFS competition; Semelsberger, who placed third on the day with a 12-14 limit, has notched five AFS top-10s and another three in the FLW Bass Fishing League.

“I caught fish almost all day,” said Zeisner, who was paired with fifth-place pro Grove. “You’ve just got to get into the back of the boat and work hard.”

That effort paid off with a limit anchored by a 5-pound smallmouth bass, just shy of the Big Bass award in the Co-angler Division. He caught most of his bass on a spinnerbait.

Semelsberger fished with pro Steven Hengehold (45th) and had his limit by 8 a.m., caught on a drop-shot rig with a Berkley Gulp Goby in depths of anywhere from 3 to 14 feet. They fished in the thick of the pack near the smokestacks today about two miles from the launch site.

“It was really crowded out there,” he said. “The pros were at a disadvantage today … struggling to control the boats in the wind.” 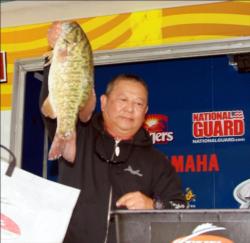 Rounding out the top 10 co-anglers on day one of the AFS Northern Division event on Lake Erie:

The co-angler Big Bass award went to Tindall for a 5-1 kicker worth $97.

• Four of the top 10 pros are from Pennsylvania