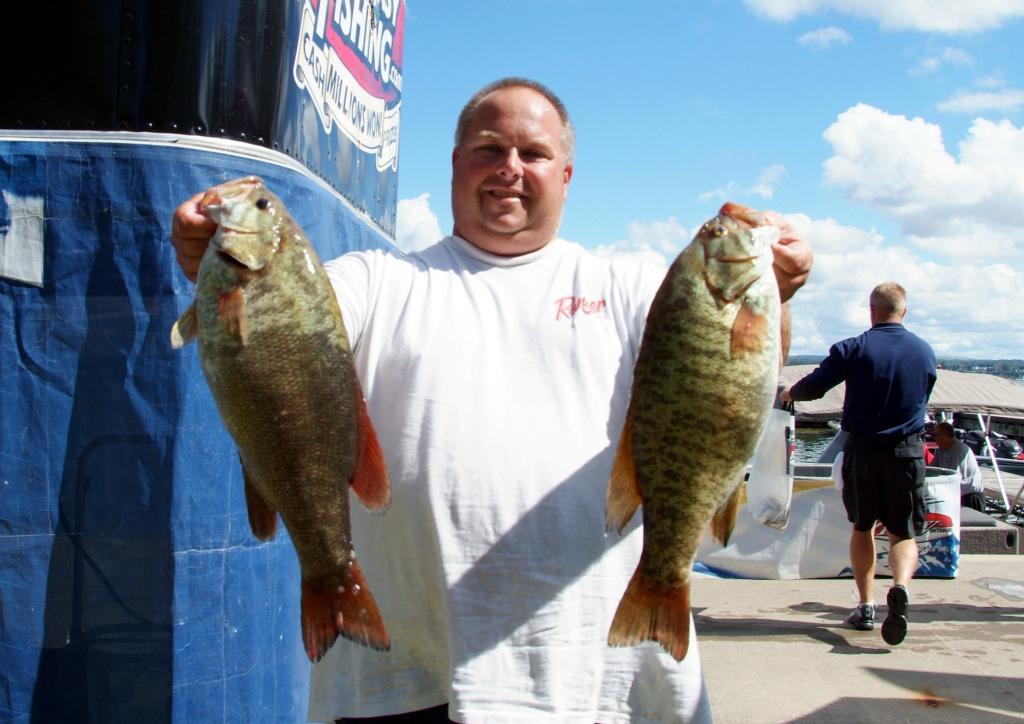 ERIE, Pa. – It’s a fish, it’s a boat, it’s … well, they aren’t exactly Aquamen, but they are most certainly super anglers (and even money says they’re both more comfortable in life jackets than in tights anyhow). Good friends, tournament practice partners and Kentuckians Pat Eichmann and Don Smith topped the Pro and Co-angler divisions, respectively, on day two of the FLW American Fishing Series event on Lake Erie.

Having practiced together for this final Northern Division tournament of the 2010 season, it’s no coincidence they are fishing in a similar way with similar baits this week. Their success thus far has led to what one might call a dream team for Saturday’s finale: Eichmann, who hails from Nancy, and Smith, from Brodhead, will fish together tomorrow in boat No. 1.

Eichmann said he met Smith, a Central Division director with the Fishers of Men National Tournament Trail, while fishing in one of his tournaments. They started fishing together, then hanging out off the water, and the rest is history with the bonus of the immediate future being bright for both fishermen.

On Friday Eichmann added a four-bass limit weighing 17 pounds, 7 ounces to his day-one weight of 12-12 to take over the pro lead with a two-day total of 30-3. He’ll carry nearly a 2-pound lead into the final day of competition.

Eichmann said he fished about four miles from Presque Isle Bay today near “probably 20 other guys,” but he keyed on a hump he found in practice. He said he starts his run in about 50 feet of water, drifting back in until he’s over the hump while dragging a drop-shot rigged with Berkley Gulp creature baits or a Jackall Cross Tail Shad. Another key to his success is light line and heavy weights.

“You’ve got to keep that bait right on the bottom,” he said, “and your leader has to be really long.” 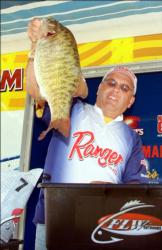 When asked about his pairing for tomorrow with his longtime fishing buddy, Eichmann was all smiles: “We’ll probably fight over the baits, but whoever gets bit – they better bring it in.”

Syracuse, N.Y., pro Patrick Roy caught a 15-10 limit of four bass Friday for a two-day total of 28-5 and is currently runner-up.

Roy wasn’t able to get to his planned destination on Lake Erie today that is west of the takeoff site on the peninsula due to the wind, so he headed east to an area about a half-mile from where he fished on day one – a section of the shipping channel that runs into Presque Isle Bay. He found a spot where he caught a couple of short largemouths and a northern before changing things up a bit (ultimately he weighed two smallies and two largemouths).

“I decided to go a little deeper – from 15 to 20 feet – and found a little bit of grass and caught (all of his keepers) on drop-shots,” said Roy, who had been fishing crankbaits.

“I think I can go out and find them again tomorrow,” Roy said, adding that he’ll start the day off drop-shotting in a little deeper water. 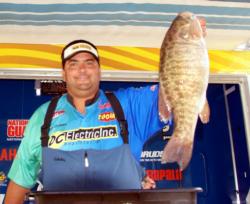 Pro David Cioppa of Hopkinton, Mass., tripled his day-one weight of 7 pounds Friday with an impressive four-bass limit weighing 21-1 for a two-day total of 28-1 and third place.

“On day one, we were stuck in the bay … that was tough fishing for everybody,” he said, adding that he moved to an area referred to as “the dump” today, about seven miles out from Presque Isle Bay, and rotated between two spots.

“We started in about 50 feet of water, and we were drop-shotting cut-tail worms and another bait called a [StrikeZone] Slammer that I got from a friend I’ve been staying with this week; it’s a Canadian drop-shot bait I’d never seen before – like the old goby baits, but with more detail and they swim a lot better,” he continued. “You have to watch your rod tip constantly and get the hook set right away.”

Dubois, Pa., pro Jamie Ferdarko brought another limit to the scale today weighing 14-7, exactly 1 pound better than yesterday, for a two-day total of 27-14. He now sits in fourth.

Ferdarko ripped crankbaits in shallow water Thursday and intended to fish a similar pattern in a particular spot out on the main lake Friday.

“The wind was a little bit off for the area I wanted to hit … so I went to one key area where I knew I could get a quick limit shallow,” he said, “and then I went drifting.”

Ferdarko was able to cull three fish by switching to a drop-shot in an area he said he can reach in about a half-hour from the launch site. He said he’ll start off with the drop-shot tomorrow and then “head back shallow for an hour or two to try to find those bigger fish” he found while practicing.

Interestingly, Ferdarko wasn’t planning to fish the AFS event this week until a friend, who fishes the Northern Division as a co-angler, asked him to register to be guaranteed a slot in the tourney. So Ferdarko is fishing in a borrowed boat, which may explain his laid-back demeanor despite the fact that this marks his first-ever FLW tournament as a pro. 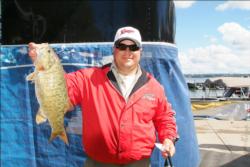 Day-one pro leader James Wigal of Washington, Pa., lost a little weight today, but not the kind for which you receive compliments. After weighing a 17-11 sack on day one, his limit today only registered 9 pounds, 12 ounces for a two-day total of 27-7 and a fall to fifth place.

But Wigal said he doesn’t regret leaving his accidental day-one honeyhole in the bay for a run out to an area called “the chutes” on Lake Erie. For one thing, he said people were catching fish all around him today, including the biggest bass weighed, so it was theoretically a good move. But when he returned to the bay to round out his limit, which he did with three largemouths, he said he had essentially “fished it out yesterday.”

But don’t count him out of the running, as he said he’s got “a whole new area to go to tomorrow.”

Rounding out the top 10 pros who will compete in the AFS Northern Division finale on Lake Erie: 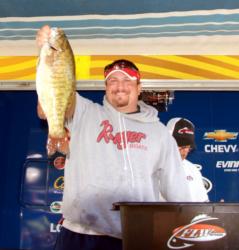 As reported earlier, Don Smith continues to lead the Co-angler Division of this week’s AFS Northern event on Lake Erie. And now his good friend and practice partner Eichmann has climbed to the top of the pro ranks, meaning they’ll get to fish together again tomorrow – just like back home in Kentucky, except the stakes are much higher, though Smith isn’t a bit nervous about the outcome.

“No matter what happens tomorrow, I’ll be smiling, because we’ve come this far, and now we’ll get to fish together,” said Smith, who has landed four-bass limits weighing 16 pounds, 6 ounces and 16-1 for 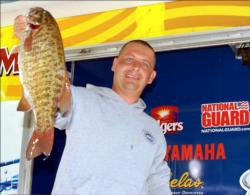 Not only will the two share boat No. 1, but Smith said he’ll likely have to bum some baits from Eichmann. They have both been fishing similar baits this week since finding success with them during practice, and Smith said he’s all out of one.

“The Berkley Gulp baits have played a big role,” he said. “The leeches [in green-pumpkin/candy color] have been working real well; it’s just that they’re hard to find.”

Smith has also done well in the drop-shot department with Jackall Cross Tail Shad baits in “Purple Weenie” color. He is using a ¾- to 1-ounce weight.

When asked about his consistency and skill from the back of the boat, he cited “having good boaters who have found some fish” and having patience. 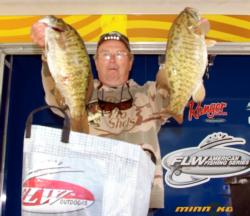 Co-angler Keneth Ramsier of Girard, Pa., is in second place. He added an amazing limit weighing 22-11 today to his day-one weight of 8 pounds for a two-day total of 30-11.

“The biggest difference [between the first two days] was we were stuck in the bay yesterday,” said Ramsier, who has fished local tournaments in Presque Isle Bay and knows the weights from there are significantly lower than what can be mined from Lake Erie. “I was real happy with 8 pounds [on day one when competitors were restricted to the bay due to high winds].”

Ramsier fished with pro Hugh Worth III today within two miles of the bay. He fished a drop-shot rig with a YUM Dinger in cotton-candy color and a 1/2-ounce weight.

“The guy I drew today had a spot, and it was a great spot,” he said of Worth, who just missed the cut on the pro side after sacking a 22-3 limit today. “The biggest key was … we didn’t lose a fish. We took on each fish and fought for them.” 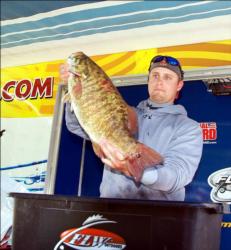 Rounding out the top 10 co-anglers who will fish the finale of the AFS Northern Division event on Lake Erie:

Walker earned the co-angler Big Bass award and $97 for a monster smallmouth weighing 7-6.