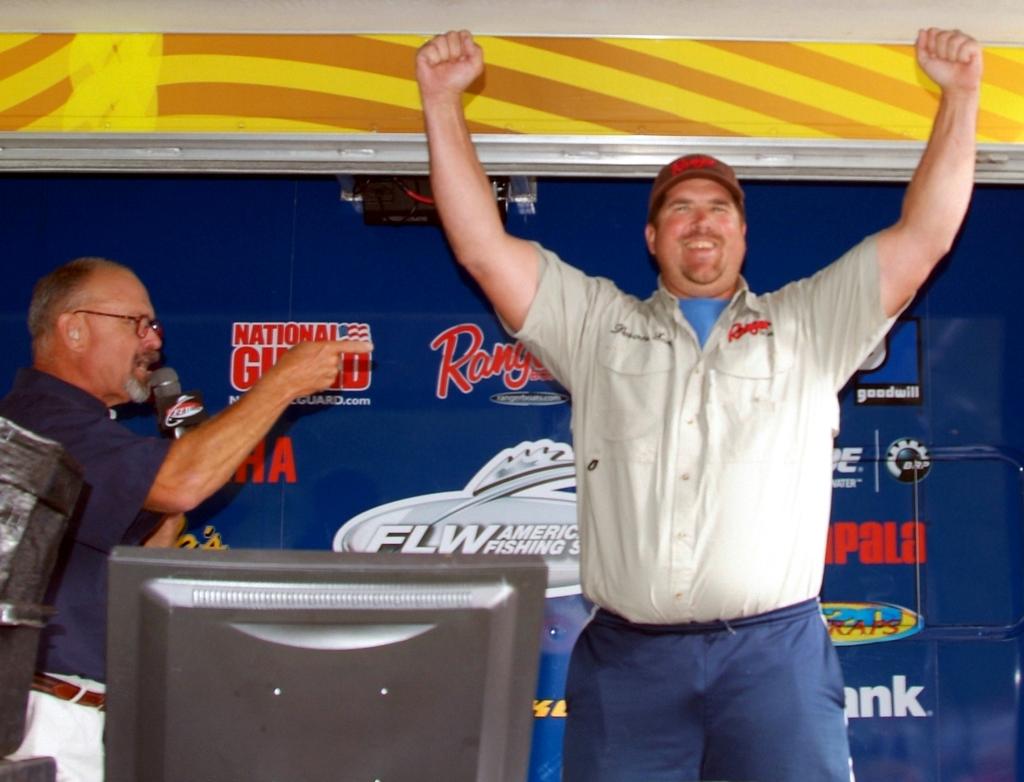 ERIE, Pa. – The final FLW American Fishing Series Northern event of the season unfolded in dramatic fashion this week on Lake Erie with a different pro topping the leaderboard each day of the tournament. First up was James Wigal, then it was Pat Eichmann’s turn. When the finale began Saturday morning, odds are probably good that few expected a first-time FLW competitor named Deron Eck – who weighed a scant 5 pounds, 4 ounces on day one – to rise up from below the fold to win.

But in the end, it was Eck’s Erie. The Kittanning, Pa., pro and self-described “river rat” rocketed up the standings from 31st on day one to make the top-10 cut Friday on the back of an impressive four-bass limit weighing 20 1/2 pounds. Then the 43-year-old steel worker saved his best for last, catching the biggest limit of the tournament Saturday – 23 pounds, 1 ounce – to leap from seventh place into the winner’s circle with a total weight of 48-13. 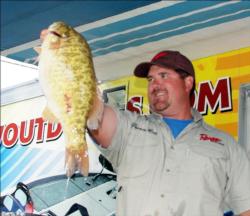 For his tremendous effort, he was rewarded with a first-place prize of $15,860 plus a fully rigged Ranger 198VX with a 200-horsepower outboard engine.

“I’ve been second place up here so many times … I’m just ecstatic,” he said moments after he was declared the winner. “I love FLW Outdoors … it’s just an incredible circuit. People here just treat you wonderful.”

Eck is obviously no stranger to tournament fishing, but this week marked his first foray into FLW competition. He lives about 120 miles south of Lake Erie and calls the Allegheny River his home water.

“I’m a river rat at heart, but I still love to come up here,” he said. 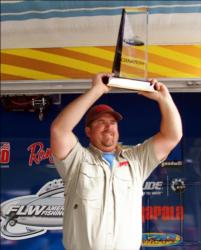 Eck’s primary baits this week were a drop-shot rig with a Poor Boy Goby in “Golby” color with copper/purple flakes and a Poor Boy tube in “Mango Magic” color. He said he usually started his day fishing the drop-shot on bottom or dragging the tube in deep water; then when the fish would suspend later in the day, he’d fish a little shallower with a jig.

“I think I was catching them a little bit deeper than a lot of the guys – in about 40 to 45 feet,” he said. “(The big smallmouth bass) are still in their deep summer pattern, chasing the emerald shiner.”

A vast majority of the top 10 pros fished a submerged dumping ground this week in Lake Erie that is about two and a half miles from the launch site at Presque Isle Bay State Park. Eck did some of his fishing there, but also had a productive area a couple of miles west near Walnut Creek.

Eck has a simple explanation for his poor showing on day one: He never practiced in Presque Isle Bay, where anglers had to stay Thursday due to high winds and a small-craft advisory for the main lake.

“The lake was so rough [leading up to the event] … but I practiced on the lake the whole time,” he said. “I thought (those two bass weighing 5-4) on day one would ruin me.”

Eck sounded far from ruined Saturday as he savored the excitement of his victory. 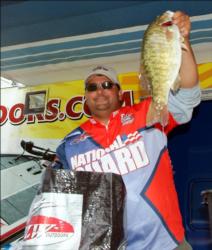 Hopkinton, Mass., pro David Cioppa climbed one place to second Saturday after sacking a 19-14 limit of bass to give him a three-day total weight of 47-15 worth $5,392. He is a seven-year veteran of AFS Northern competition.

Cioppa was with the pack today at the “dump site,” which fifth-place pro Bill Chapman described as a 36-foot-deep area surrounded by water 50 feet deep and riddled with “sweet spots.”

“A lot of the people were drifting; I had three spots I’d rotate between,” Cioppa said. “I was just drop-shotting right on top of (the bass holding in his areas).”

He rigged his drop-shots with either green-pumpkin Jackall Cross Tail Shad baits or with a StrikeZone Slammer. The latter bait is made in Canada and was new to Cioppa until his buddy and day-three co-angler Jeff Zeisner from Ontario clued him in.

“I’d just shake (the drop-shot rig) and work it very slowly, and they would just slam it,” Cioppa said. 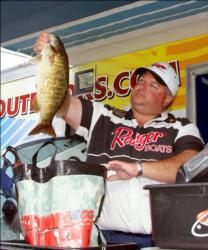 Though he took it in good stride, Pat Eichmann’s fall from first had to be heartbreaking. The Nancy, Ky., pro and longtime FLW competitor practiced with good friend and fellow Kentuckian Don Smith. The two shared baits and found their patterns together. And after they both led day two, they even were paired together today in the finale. But Smith won the Co-angler Division, while Eichmann had to settle for third place and $3,806.

“It’s just one of them things; I’m fine with it,” he said. “The Lord blessed me already … and one of these days, it’s going to happen.”

Eichman, who has a half-dozen top-10 finishes in FLW events, added a nice 17-3 limit Saturday to his limits from days one and two for a total of 47-6.

Eichmann fished an underwater rock jetty on day one and a hump he found in practice that was near many of the other fishermen after that. He would start in about 50 feet of water and then drift back over the hump, dragging drop-shot rigs with either Berkley Gulp creature baits or a Jackall Cross Tail Shad.

“The wind would work it for you,” he said. 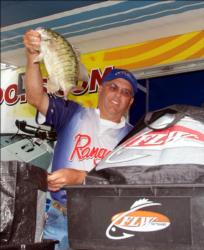 Roy moved around this week to bag his bass, fishing “mostly crankbaits the first day,” Rapala DT 16s and Strike King XD6s, and then drop-shotting with a black Berkley Crawler rigged wacky style.

Roy picked up his second top-10 finish in FLW competition this week.

Veteran FLW pro Bill Chapman of Salt Rock, W.Va., climbed a slot to fifth place today with a 14-9 limit for a total of 41-9 and a $2,855 paycheck. His real accomplishment today, however, was winning the points title in the AFS Northern Division, which punches his ticket to the lucrative Forrest Wood Cup championship in 2011.

Chapman, who has fished with FLW Outdoors since before the company took that name, has now 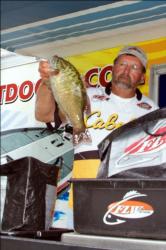 Like nearly every angler to cross the stage this week, Chapman sang Erie’s praises as one of the best smallmouth fisheries in the nation. He pointed out that eight of the top 10 were fished the same spot today and about 20 boats were there yesterday – the dump area – but it still kept producing huge smallies.

“What a place,” he said, adding that he fished a drop-shot with a Berkley Gulp Minnow in emerald-shiner color.

Rounding out the top 10 pro finalists who fished the AFS Northern Division event on Lake Erie: 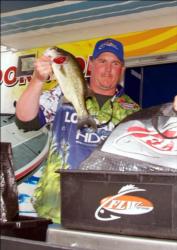 The top pro and co-angler based on point standings from each of the FLW American Fishing Series divisions – Central, Northern, Southeast and Texas – will qualify for the 2011 Forrest Wood Cup. The top 50 pros and 50 co-anglers from each division also qualify for the American Fishing Series Invitational on Wheeler Lake in Decatur, Ala., Nov. 4-6, with the winning pro and co-angler also advancing to the Forrest Wood Cup.