Aaron leaves field ‘in the wind’ at Wheeler 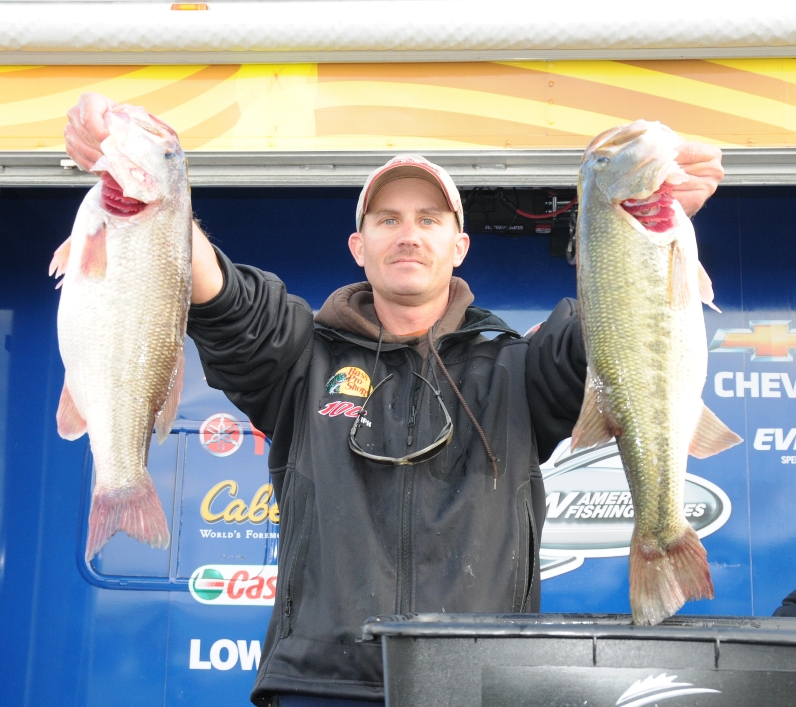 Chad Aaron of Ethridge, Tenn., leaves the competition in the wind after day one at Wheeler Lake with a whopping 21-12. Photo by Rob Newell. Angler: Chad Aaron.
November 4, 2010 • Rob Newell • Toyota Series

DECATUR, Ala. – With a 20- to 25-mph northwest wind howling straight down the front stretch of Wheeler Lake and a strong current pushing against it, the sight from Ingalls Marina in Decatur looked more like Lake Champlain this afternoon.

As the FLW American Fishing Series Invitational weigh-in got rolling, it was evident the wind had taken its toll on the catches. Pros who toted five-bass limits to the bank felt like they had won the battle against Wheeler. For a long while it looked as if the 13-pound range would be the mark to beat on such a blustery day.

Then Chad Aaron of Ethridge, Tenn., dropped an astounding 21 pounds, 12 ounces into the scales, and for a brief moment even the wind seemed to lie down in awe of such a feat.

“A little redemption, finally!” exclaimed Aaron, who qualified for the event through the Southeast Division of the AFS. “This was my first season fishing these, and my performance has been terrible. And this week things got even worse.”

Aaron is referring to an auto accident he was in Tuesday afternoon when his boat was completely knocked off the trailer by another vehicle. 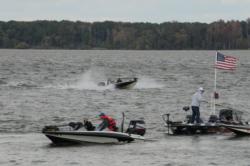 “I’ve had to borrow a boat; then this horrible cold front came in – the whole nine yards. So to finally catch a big bag of fish makes me feel a little better anyway.”

Aaron now has a 7-pound lead going into day two.

Naturally, Aaron was hesitant to give up many details of his catch, but it’s obvious he is on some tremendous fish as he took pro Big Bass honors with a 5-pound, 10-ounce largemouth, and his co-angler also took Big Bass honors in his division with a 4-pound, 11-ounce bass.

“I have one primary area, and I’ve got six little sweet spots within it,” Aaron said. “I left that primary area about 9:30 this morning with a pretty decent limit and still managed to upgrade a couple of times while checking a couple of other backup spots.”

In terms of his technique, all Aaron would let on is this: “It’s my absolute favorite way to fish; I have the utmost confidence fishing this way – there’s nothing else I’d rather be doing than the way I’m fishing here right now.” 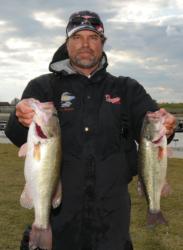 Believe it or not, despite the high winds, Snider held his place on offshore ledges to catch his fish today.

“I fought 3-footers coming over the bow all day,” Snider said. “Ironically, the thing that really helped me was the fact that they were pulling the current so hard and it was going the opposite direction of the wind, so I could hold my position a little better.

“I’m just dragging a ¾-ounce jig out there,” Snider continued. “The thing that helps the most is going to light line – 12-pound-test fluorocarbon – because it does not catch the wind and current near as bad as a 15- or 17-pound-test. I probably went through three limits of fish today on 12-pound-test.”

When asked if he would like to see the wind calm down, Snider actually said no.

“That wind is keeping everyone off the ledges, and I’d just prefer to keep it that way,” Snider said. “I’ll endure 3-footers as long as I can have those ledges to myself.” 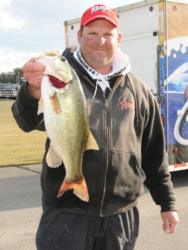 Golden started the day on schooling fish, which are chasing shad. But once the shad left, so did his fish.

“Once the sun got up high, I could literally watch the shad schools leave the little cove I was fishing and head for deeper water,” Golden said. “And after the shad left, all we could catch was catfish and drum.” 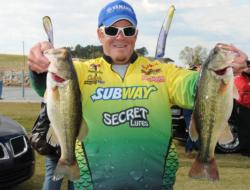 Voyles is running about 16 to 18 spots that are somewhat protected and out of the wind.

“Most of the places are fairly shallow,” Voyles said. “I’ll spend 5 to 15 minutes per spot and then keep moving. I did repeat on a couple of banks. At one point I started covering some new water and my co-angler caught a couple of 3-pounders, so I’ll probably take a closer look at some of those places tomorrow.

“But the best part is I never saw any boats on any of my spots today,” Voyles continued. “So I’m pretty excited to get out there tomorrow and fish again.” 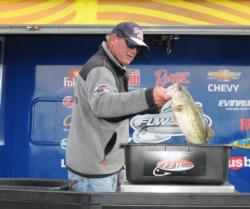 Rounding out the top five is Robert Boyd of Russellville, Ala., with a five-bass limit weighing 13-1

Rounding out the top 10 pros in the FLW American Fishing Series Invitational after day one: 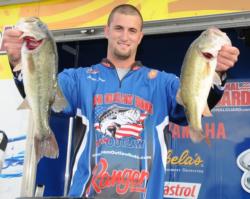 Andrew Luxon of Richmond, Ky., sacked up 13 pounds, 6 ounces to take the lead in the Co-angler Division at Wheeler Lake.

Luxon fished with pro Stephen Johnston and used a 1/2-ounce Cumberland Pro jig to do his damage.

“Jig fishing is what I love,” Luxon said. “Whenever there’s an opportunity to drag a jig, that’s what I do. I finished second on it at Kentucky Lake this year, and it’s working here, too.”

Steve Gregg of Florissant, Mo., is in second place in the Co-angler Division with a five-bass limit weighing 12 pounds, 13 ounces.

Gregg fished with pro John Voyles today and dragged a jig behind him for his catch.

“I have to thank John today,” Gregg said. “He did all the work, holding the boat in the wind so I could fish.”

Co-angler Anthony Goggins of Auburn, Ala., is in third place with a five-bass limit weighing 10-15.

Antoni of Bicy of Lansing, Mich., is in fourth place with a five-bass limit weighing 9-14.

Greg Sorrell of New Hope, Ala., is in fifth place with a five-bass limit weighing 8-15.

Rounding out the top 10 co-anglers in the FLW American Fishing Series Invitational:

Day two of the American Fishing Series Invitational will continue Friday at 7:15 a.m. from Ingalls Harbor in Decatur, Ala.