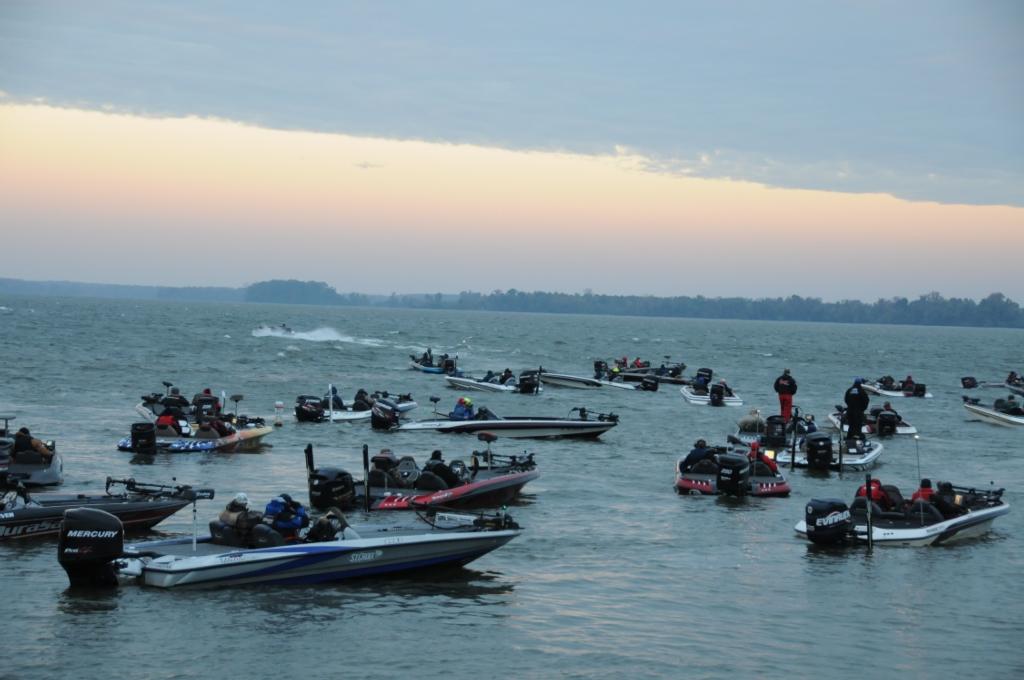 At the day-one takeoff of the FLW American Fishing Series Invitational on Lake Wheeler, the first big cold front of the year could be seen clearing the sky as a raw north wind began to blow. Photo by Rob Newell.
November 4, 2010 • Rob Newell • Toyota Series

DECATUR, Ala. – The takeoff temperature at the FLW American Fishing Series Invitational this morning was 53 degrees, and it’s not forecasted to get much warmer than that for the next three days.

The South’s biggest cold front of the year is bearing down on northern Alabama. As the takeoff ceremonies began at sunrise, a distinct line of clear sky was pushing yesterday’s heavy overcast out of the way. After the “blue line” pushed past Wheeler Lake, a wicked north wind began to show its teeth.

Today, north winds are supposed to howl to 20 mph with gusts as high as 30 mph. The temperature today is supposed to max out at 62 degrees, and then it’s all downhill from there with Saturday’s morning low estimated to be around 27 degrees.

It’s a welcoming of winter on Wheeler Lake.

But the 120 pros and 120 co-anglers fishing the event this week seemed undaunted by the incoming front. And Wheeler Lake bass are certainly used to such weather. It might even help accelerate the fall feed as bass now realize winter is certainly on its way.

The winter drawdown has also begun on Wheeler, and the backwater flats now look like Mobile Bay at extra-low tide. The dropping water should help concentrate fish in small ditches and channels.

So even though the big chill is arriving in northern Alabama, the falling water levels and water temperatures will stack up fish somewhere, and someone in this event is going to get well in a hurry.

Anglers will take off from Ingalls Harbor in Decatur, Ala., at 7 a.m. each day. Daily weigh-ins will be held at Ingalls Harbor beginning at 3 p.m. Takeoffs and weigh-ins are free and open to the public.