Owens owns it on Choke Canyon 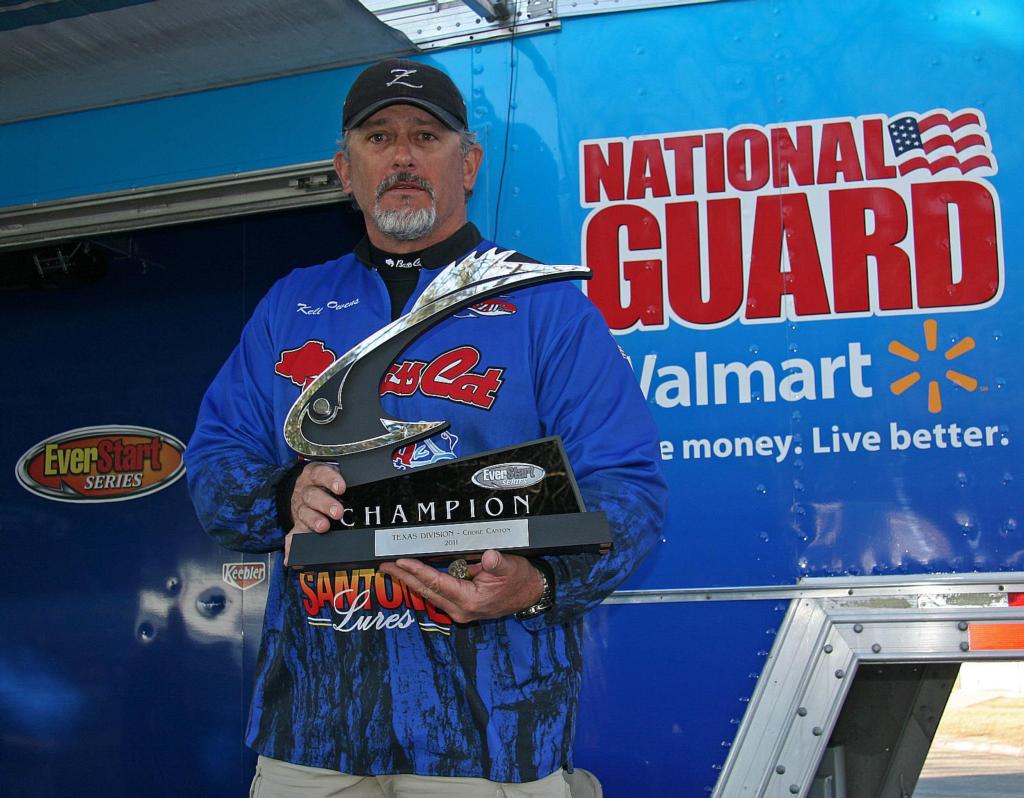 CALLIHAM, Texas – If there’s one thing Kelly Owens did not want to do in practice, it was catch a fish. In the end, his fervent stance on resource management played a key role in his wire-to-wire victory in the EverStart Series Texas Division opener on Choke Canyon Lake.

Having located a productive little drain at the lake’s south end, the Crowley, La., pro felt confident that he had a spot with enough potential to carry him through the tournament. Fishing in the lake’s south end, Owens targeted a grass-lined ditch that started in 5 feet of water and ran out to about 14. A natural prespawn staging area, the spot seemed to replenish daily.

“If you fish around the competition that’s in this division, I have learned that you cannot use fish,” he said. “During practice, I’d get bites, but I’d shake them off. I would not let myself catch fish.

“The area where I caught all of my fish, I went into twice during practice. I’d go back every once in a while to see if anyone was in there, but I would not catch the fish. With these guys, you cannot waste a bite. There’s a lot of money at stake.”

Locals laud Choke Canyon for its great numbers of quality and trophy-class fish, but recent weather 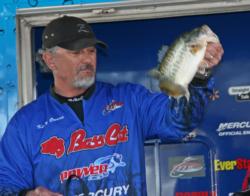 patterns served up a challenging week for tournament anglers. For starters, a cold front about a week before the event dropped the water temperature into the low 50s and stalled the shoreward movement of prespawn bass. Just when things were starting to stabilize, another front pushed through on day one of the tournament. That first morning saw a dense fog causing a nearly two-hour delay. When the fog finally departed, it did so at the urging of 20 mph winds that pounded the lake and made it very difficult to maintain boat control.

Day two’s post-frontal conditions – sunny, cool and high pressure – made for a mostly challenging scene, but the catch data showed a distinct improvement in productivity. Most predicted the final day’s warming trend would triggers a wave of activity, but most finalists found just the opposite. Many struggled with uncooperative fish, and only one angler (second-place pro Russell Cecil) broke 20 pounds.

Owens began his campaign with a limit weighing 25 pounds, 1 ounce – the first day’s only bag of 20-plus. He followed a day later with 28-2. Four others passed the 20-pound mark on the second day, but Owens’ was the biggest of the tournament. His 11-pound, 3-ounce bass was the largest of day two. On the final day, Owens saw his spot turn stingy, and he managed only a 15-pound limit. Nevertheless, the combined weight of his first two days’ effort had given him a huge margin going into the final round, and he ended the tournament with 68-3 and a winning margin of 14-10.

A Norman Deep Little N in pearl-chartreuse with black back accounted for all of Owens’ tournament fish.

Entering the final round in fifth place, Cecil knew he had a lot of ground to make up and his limit catch of 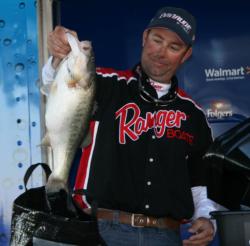 Cecil’s schedule prevented him from practicing during the tournament week. However, putting in some practice time about a week prior, he said, worked to his favor, both tactically and psychologically.

“I think I was better off because of that because I came when they were biting (consistently), so I was able to find some areas that had some fish in them. Everybody got here (this week) and it got tough, but (my pre-practice) made it a little easier on me. That allowed me to keep my mind off not getting any bites in practice, so it really worked out for me.

“I’d never been on Choke Canyon before, but I came over here and started looking around; saw some hydrilla, got excited about that, tied on a Rat-L-Trap and went fishing. I found all of my spots trapping. I threw a little Bandit 100 in there sometimes; I threw a spinnerbait early in the morning. Today, I had to slow down a little and fish some Big Bite soft plastics, but all of my big fish came on moving lures.”

Even with the local weekend traffic, Cecil said the lighter fishing pressure of day three proved 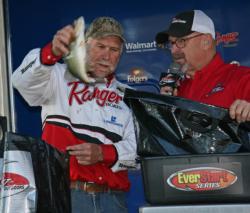 helpful. “Fewer boats out there probably helped because I got to run more of the spots I found in pre-practice.”

Lasayone slips one spot to third

Kevin Lasyone lacks not for experience or angling skill, but he knows he made a lucky cast and he’s thankful for the outcome. On day one, he was planning to flip a grass line, so he tied off to a tree to hold his position in the wind and stake his claim. When another boat approached, he cast his Texas-rigged Yum Dinger in that direction to mark off the water he intended to fish and when the bait hit the bottom, a 7-pounder ate it.

“I tell you, it was heaven sent,” Lasyone said. “After that, I just kept casting out toward the middle and catching fish. I couldn’t even tell you how deep the spot was. I just went back there (yesterday and today) and tied up to the same tree. They just didn’t pull up and feed today.”

When his lucky spot yielded only one fish today, he returned to flipping and added two more. On day three, Lasyone caught three fish for 5-14 and ended with 47-0. He caught 16-7 on day one and 24-11 on day two.

Sticking with a Yo-Zuri Rattling Vibe for the entire tournament, Matthew Scogin, of Magnolia, Texas 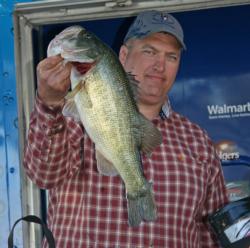 Scogin targeted a ditch running up to a main lake point. He surmised that the fish were following the deeper lane up to the shore and then dispersing.

“The spot kept replenishing,” Scogin said. “Most of my fish came out of a 50-yard circle. I think the fish were coming up that ditch and then (spreading) along the banks.

Entering day three in third place, David Curtis, of Trinity, Texas caught a final round limit of 11-15 and slipped two notches to fifth with a total of 44-4. He had 14-0 and 18-5 on the first two days. 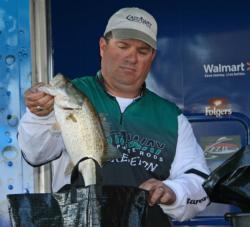 Throughout days one and two, Curtis found most of his fish in one spot – the junction of a ridge and a grass line. He returned to the spot today, but found his productivity waning.

“Today, it didn’t quite work out like the last two days, but I ended up catching a few,” Curtis said.

Curtis caught most of his fish on Carolina rigs, but when today’s bite slowed, he relocated to another spot, pulled out the flipping stick and finished his limit.

Rounding out the top-10 pro leaders at the EverStart Series Choke Canyon event: