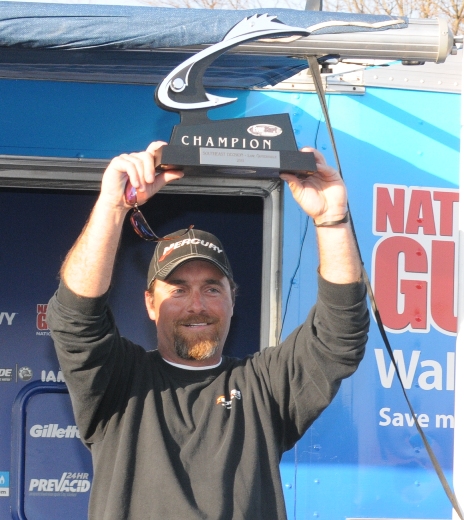 Jason Atkins of Section, Ala., wins the Co-angler Division of the EverStart event on Lake Guntersville with a three-day total of 46-1. Photo by Rob Newell. Angler: Jason Atkins.
February 26, 2011 • Rob Newell • Toyota Series

GUNTERSVILLE, Ala. – Jason Atkins of Section, Ala., wanted to fish the Lake Guntersville EverStart as pro. But when he learned that in order to guarantee his boater status in the EverStarts, he would have to enter all four events, he decided to switch to the Co-angler Division where he was guaranteed a slot on his home lake.

And maybe the move was not such a bad idea as Atkins emerged victorious in the Co-angler Division with a three-day total of 46 pounds, 1 ounce, which earned him a new Ranger boat, motor and trailer.

“I’m shocked,” Atkins said. “I figured I was going to finish about eighth place with the limit I had today. I still can’t believe I just won.”

As a Guntersville local, Atkins was plugged into the rattle bait grass bite on his home lake. He felt right at home in the areas that his day one and day two pros, Arnie Lane and Justin Lucas, took him to. 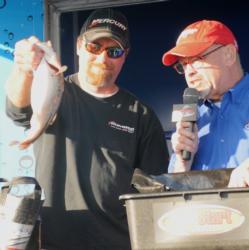 “The deal here right now is standing milfoil – milfoil that’s still green with leaves on it,” Atkins said. “The first two days I used an Excalibur Xr-50 in Rayburn Red in that standing milfoil.”

Atkins day one and two catches were 14-11 and 19-1 and he entered the final day in second place.

On the final day he was paired with tournament winner Robert Boyd who was not fishing grass.

“I was a little worried about fishing with Robert,” Atkins explained. “He’s a great guy and as it turns out we had an awesome day together. But I knew he was not going to be around grass.”

Atkins was forced to put down his favorite Excalibur rattle bait and instead tied on a ¼-ounce shaky head with a Zoom green pumpkin candy Trick Worm.

“A shaky head is not exactly my strength on this lake, but I figured it would get me a few bites fishing behind Robert in an already pressured area – and it worked out for the best,” Atkins added.

The 12 pounds, 5 ounces the shaky head produced today was enough to land Atkins the win. 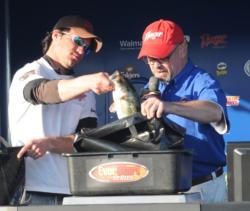 Alex Posey of Roswell, Ga., finished second in the Co-angler Division with a three-day total of 44 pounds, 9 ounces worth $4,500.

During the week Posey fished with pros Craig Taylor, Adam Brown and Casey Martin catching weights of 22-15, 14-9 and 7-1, respectively.

“If I felt a clump of milfoil, I’d keep casting at it over and over until the boat got too far away to reach it,” Posey said. “Once I contacted the grass, I tried to work the bait as slow as I possibly could in the clump – almost like a jig. I was not ripping it fast, instead I was trying to get it hung up and then kind of pulling it along the stalks of grass until it broke free – and that’s when I’d get a bite.

“Repetitive casts were a big key,” Posey added. “A lot of my best bites came on the fifth or sixth cast to the same clump.” 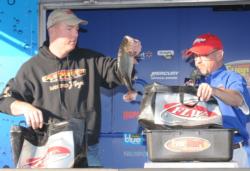 Mark Sullivan of Collinsville, Miss., finished third in the Co-angler Division with a three-day total of 43 pounds, 8 ounces worth $4,000.

Sullivan fished a Strike King Redeye Shad in gold sexy shad and a Rapala DT-10 in chartreuse with a blue back to catch his fish during the week.

Slaton, Stevenson round out top five

Charles Stevenson of Albany, Ga., rounded out the top five with a three-day total of 39 pounds, 7 ounces worth $3,000.

Rounding out the top-10 pros in the EverStart Series event on Lake Guntersville after day two:

The next FLW EverStart Southeast event will be held April 28-30 at Lake Eufaula in Alabama.