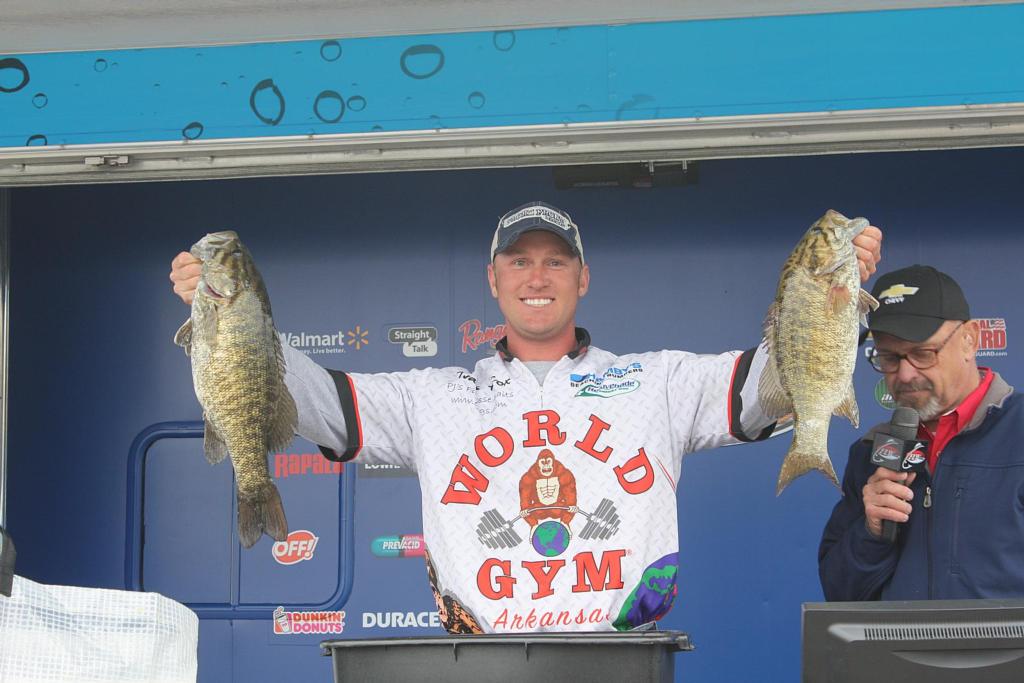 BENTON, Ky. – As expected, Kentucky Lake lived up to its lofty reputation today, as EverStart Series Central Division anglers brought sack after sack of fat bass to the scales despite what many described as a slow bite. All total, five pros weighed in limits totaling more than 20 pounds, with Travis Fox of Rogers, Ark., taking the day-one lead with five bass weighing 23 pounds, 13 ounces.

While some competitors struggled to bring in a limit, many brought in impressive fish that tipped the scales, the heaviest weighing in at 7 pounds, 3 ounces, caught by pro Seth Brown. Falling water levels and a rather drastic change in air temperatures over the past few days made for interesting fishing conditions to say the least, though many thought the changes, particularly the water levels, worked to their advantage.

Day-one leader Fox counts himself among the anglers glad to see conditions as they were, as evidenced by his day-one haul. He is no stranger to Kentucky/Barkley success, having finished fifth here in 2009 at a Wal-Mart FLW Tour event.

“I caught some of the biggest bass I ever caught in practice,” Fox said. “I’m fishing hardcore prespawn areas in 6 to 8 feet of water.”

Rattling the nerves of many an angler is tomorrow’s forecast, which is calling for much higher winds than Mother Nature brought on day one. Fox, for one, is not counted among the worried ones.

“If the wind picks up it will actually make them bite,” he said, although noting it will make it tougher to position the boat. Regardless of the wind or the water level, Fox says, there’s always good fishing to be had on Kentucky Lake.

“I like the water level high, but it doesn’t matter,” he said. “It’s Kentucky Lake. They like to bite.”

Only 10 ounces behind Fox in second place is Jeremy Ethridge of Nashville, Tenn., with a day-one haul of five bass weighing 23 pounds, 3 ounces.

“It took all day to catch them,” Ethridge said. “There was no rhyme or reason to it.”

Ethridge did not make a long run, though, meaning tomorrow’s forecasted winds – and resulting choppy waters – may not affect him as much as some other competitors.

“I found these fish in practice, and I hope I can catch them again,” he said. “I had a couple of spurts with some fish up feeding. I feel pretty good about it.”

Taking the No. 3 spot on day one is Mike Hollingshead of Murfreesboro, Tenn., with a limit of bass weighing 23 pounds, 1 ounce. While he is clearly on good fish, to hear him tell it, today it was more a matter of luck.

“It was tough,” Hollingshead said. “I just got five good bites. I only caught maybe seven or eight keepers all day.”

Using a Hoppy’s Jig and a Strike King Series 5 crankbait, Hollingshead will head out tomorrow looking for the big fish on the drops he fished today.

“I just hope the good Lord blesses me,” he said. “I’ll try it one more time.”

Loyd, Arthur round out top five

In fourth is Travis Loyd of Kinmundy, Ill., with five bass weighing 22 pounds, 9 ounces. Behind him in fifth is Stuart Arthur of Benton, Mo., with a limit totaling 20 pounds, 11 ounces.

Terry Hollowell of Anderson, Ind., finished day one in the top spot atop the co-angler leaderboard with a five-bass limit weighing 16 pounds, 13 ounces. Overall, it was a good day to be a Hollowell on Kentucky Lake, as his son, Todd, is currently sixth on the pro side with 19-6.

“I had a really good partner in Phillip Bates,” Hollowell said. “I practiced with my son and couldn’t use any of it, but my angler helped me. I made some changes, and it paid off.”

Hollowell caught his fish today cranking river ledges and weighed in the only five bites he got. As for fishing from the back of the boat, Hollowell said he is at the mercy of the weather, his partner, and his partner’s location, and he knows tomorrow’s forecast could make for a long day.

“It’s bad enough, but you throw that wind in there, and it’s going to get tough,” he said. “But I’ll fish with somebody different, and it’ll be a new day. You just have to adapt and make changes.” 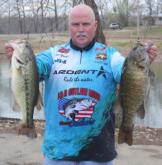 In second place on the co-angler side is Steve Gregg of Florissant, Mo., with a day-one limit totaling 15 pounds, 12 ounces.

“They’re pretty confused,” Gregg said of the Kentucky/Barkley bass. “They want to move up and they can’t. The weather and the water levels have them messed up.”

Nevertheless, Gregg hopes to duplicate his day-one success tomorrow. “I feel good about it,” he said.

In the No. 3 spot among the co-anglers after day one is Max Wilson of Everton, Mo., with five bass weighing 15 pounds, 7 ounces. Behind him in fourth is James Richardson Jr. of Cincinnati, Ohio, with a limit totaling 14 pounds, 15 ounces.