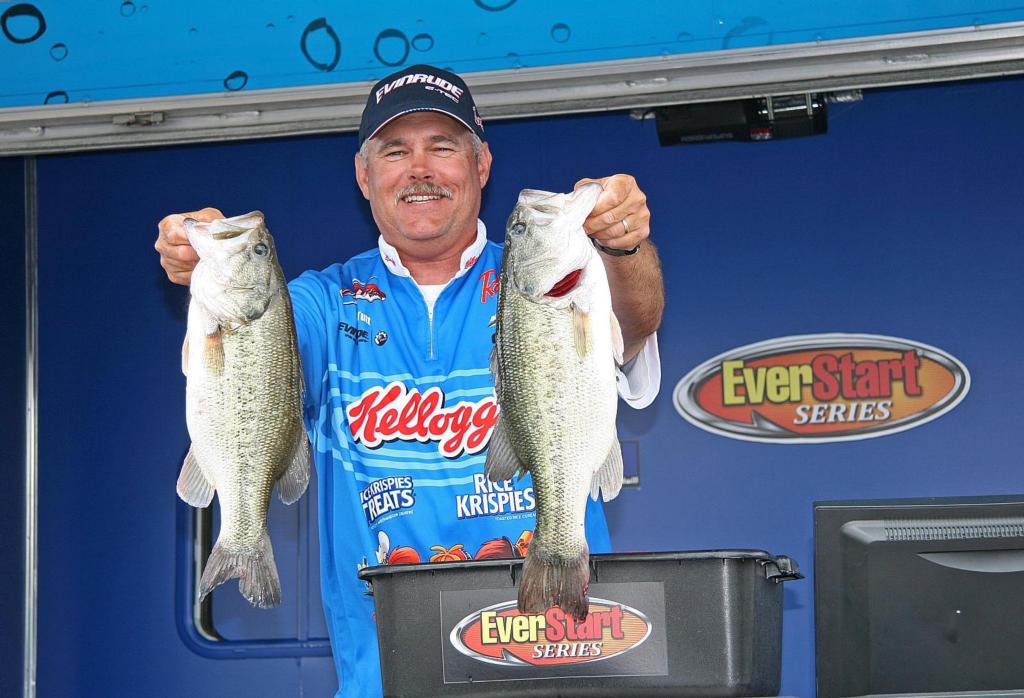 Pro leader Jim Tutt intented to fish spinnerbaits around docks, but when that fizzled, he turned to bed fish. Photo by David A. Brown. Angler: Jim Tutt.
Moser takes the lead in Co-angler Division
May 12, 2011 • David A. Brown • Toyota Series

DENISON, Texas. – Lake Texoma has a lot to give for those who’ll fight for it, and if day one of the EverStart Series Texas Division event is any indication, the lake is intent on making anglers fight, scratch, scrape and beg for it.

The water level is down about 3 feet, so much of the rock and woody cover that bank fishermen seek is standing high and dry. Similarly, a lot of the shallow dock habitat that’s normally productive during the annual shad spawn – happening now – is too shallow for bass to roam.

Today’s weather was entirely doable, but cloudy conditions hindered sight-fishing efforts. Gloomy skies hinted of rain for much of the day, and some anglers reported scattered showers stifling their action.

Although overall productivity was on the low side – just 21 pro and two co-angler limits – several nice fish reached the weigh-in stage. Big Bass winners in both divisions caught largemouths over 6 pounds. 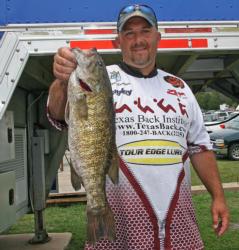 Smallies made their presence known, as well, with several nice brown fish thrashing defiantly in the weigh-in tub. Sixth-place pro Ryan Lovelace set the early mark for big fish with a smallmouth that went 3-12. Others mentioned catching nice smallies on beds.

Predictably, it would take a good sack of largemouths to top the field, and that’s what Kellogg’s Rice Krispies pro Jim Tutt had. The Longview, Texas, pro sacked up a limit that weighed 17-11.

Most of Tutt’s action was focused on spawning fish – either committed bed-fish or those that had recently moved up to the shallows. Promising to divulge more in the near future, Tutt said he was fishing with what he termed his No. 1 money bait. 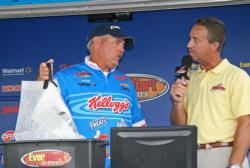 “I feel like most of my fish were on the bed,” he said. “A few of them might have been coming in to spawn. I actually saw one of the fish I weighed on a bed, but it was a fresh fish. The rest of them were in dirtier water, so I was just casting.

“I had quite a few bites today; I just had four good quality bites. So I left a couple out there that I was looking at. I couldn’t catch them today, so I backed off of them.”

Tutt said he settled on the bed-fishing game after his practice showed him that his initial game plan would likely fizzle due to the lower lake level.

“I came here anticipating fishing docks with spinnerbaits, but it was kind of tough so I had to change up,” he said. “It took me about two days to figure out that I needed to get away from docks.

“I can’t complain, I had a great day, but I made a slight mistake by leaving my spot a little early. I thought the wind was going to be bad. I ended up culling one after I left.”

Castledine in second with short sack

He was the only top-10 pro without a limit, but Todd Castledine of Nacogdoches, Texas, still placed 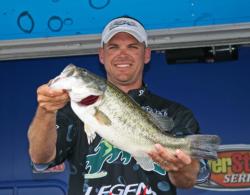 second with a trio of fish weighing 15-15. Sure, he would have preferred five, but do the math and it’s easy to see he found quality fish.

Castledine reported getting six bites today, but half of those came unbuttoned. He was unable to dial in a consistent pattern, so a mixed bag of tactics was his plan.

“I did a little sight-fishing, a little cranking and just junk-fished,” Castledine said. “The lake level didn’t bother me too much, but the rain hurt some of my spots. But other than that, everything went pretty good.”

Landan Ware of Jewett, Texas, focused on the shad spawn and found fish around deeper boat slips and floating walkways. He caught most of his fish on a Luckycraft RC 1.5 crankbait and an unweighted 6-inch Senko to bag the third-place limit of 14-12.

“The key today was staying in the areas I knew had fish and fishing real slow,” Ware said. “You had to beat on them a little and get what you could. I picked that up today. I had been catching my fish on a swimbait, but they weren’t getting it, and when I started throwing a Senko in the same color, I started catching them.”

When he found a nice piece of brush, he’d focus a little more attention on that spot by flipping a Texas- 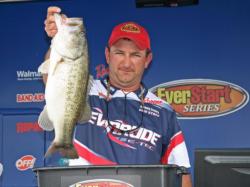 rigged creature bait with a small weight. Ware said he fished 10 spots in three main areas and stayed within 10 miles of the launch site all day.

Coming in just 4 ounces behind Ware, Jeremy Guidry of Opelousas, La., sacked up a limit of 14-8. Fishing far north on the Oklahoma side, Guidry caught most of his fish on shallow wood – a habitat currently in short supply.

Guidry caught four fish early, but No. 5 eluded him until noon. His biggest – a 6-13 – took Big Bass honors and $200. One of his early fish turned out to be a target of opportunity.

“I really didn’t plan on doing any sight-fishing today, but I saw one keeper on the bed and I caught it,” Guidry said. “I’m just kinda junk-fishing, but I caught most of my fish on plastics.”

Charles Bebber of Willis, Texas, followed Guidry in fifth with 13-7.

Rounding out the top 10 pro leaders at the EverStart Series Lake Texoma event:

Kenny Moser of Alba, Texas, topped the co-angler field with 13-11. He wouldn’t disclose his particular 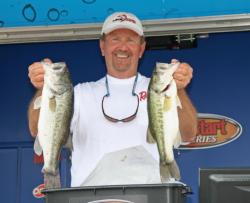 bait, but said it was brown and Texas-rigged with a light weight.

“I caught fish on wood and rock,” he said. “I had a good draw today, and we were around some fish. We went through eight or nine keeper bites and that was it, but they were good fish.”

Darren Scott of Fort Worth, Texas, placed second with 10-5; Wolv Rutherford of Ozona, Texas, was third with 9-6; Trevor Rogge of San Antonio, Texas, took fourth with 8-4; and Johnny Manning of Arkadelphia, Ark., finished fifth at 7-14.

Rounding out the top 10 co-angler leaders at the EverStart Series Texoma event: