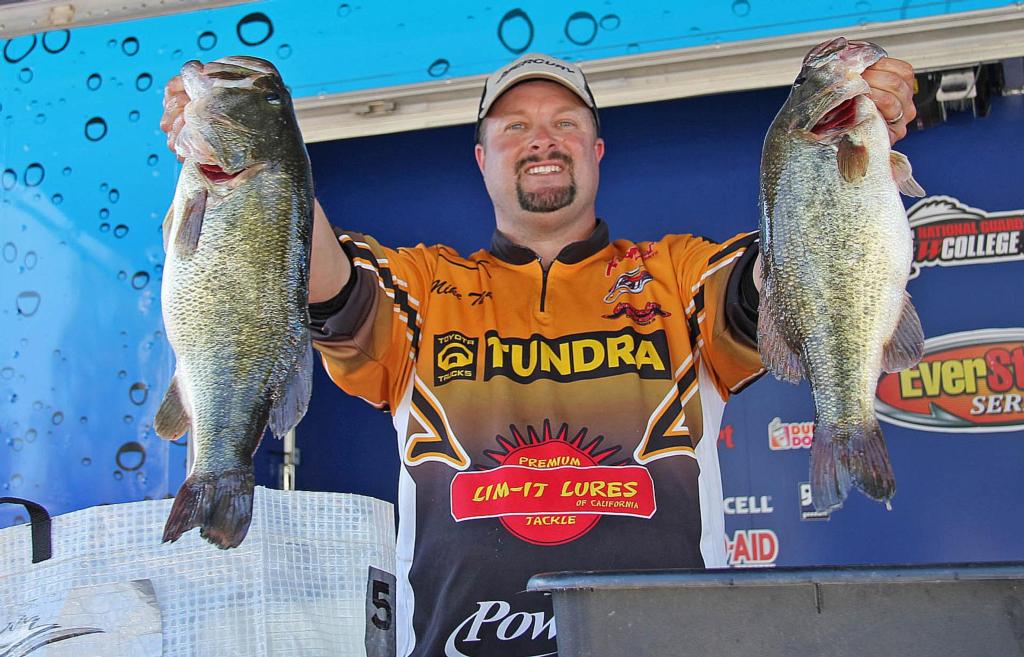 CLEARLAKE, Calif. – Michael Tuck spent more than half of his day scouring Clear Lake for a big bite that never came. Sounds like a tough deal for the Granite Bay, Calif. pro, except for the fact that Tuck had already sewn up the EverStart Western Division lead by 9:30 a.m.

Improving on his day-one weight of 23-13, Tuck moved from third to first on the strength of his 25-pound day-two effort. Today’s catch included a 6-pound, 4-ounce bass that earned Snickers Big Bass honors.

“I figured out a little thing yesterday afternoon and got on it pretty early and quit fishing for them around 9 o’clock,” Tuck said. “I had caught 30 or 40 of them and they were all the same size.”

Tuck found his day-two fish at the mouth of Rodman Slough in Clear Lake’s north end. Typical of fall 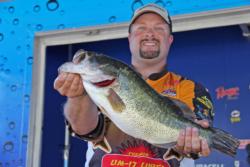 patterns, hitch and other baitfish were moving out of the narrow waterway and into the main lake. Sensing the seasonal buffet, hungry bass were stacked around the perimeter, so Tuck kept his baits in the chow line.

After bagging the weight he’d ultimately enter, Tuck departed his area of abundant quantity and went in search of significant quality. “I just ran around and fished big-fish places all day and I never got a big bite. I just want to save them for (day three).”

Uribe moves up to second 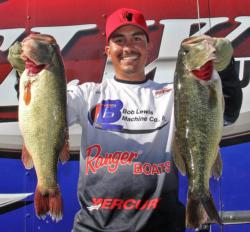 “I have one area that I’ve been starting at each morning and today (other competitors) were very respectful and let me have it,” he said. “After I had my limit, I waited for the afternoon. For me, it’s first thing in the morning and late in the afternoon.

“I’m getting all of my fish shallow and on the surface – I’m kind of just fishing for big bites,” he said. “I haven’t really gotten a big fish yet. Everything has just been quality, which is great. I’ve just been missing that one key bite. I’m getting one bite an hour, but they’re good ones.”

Ken Mah of Elk Grove, Calif. established his top-10 position on day one with a second-place 25-pound 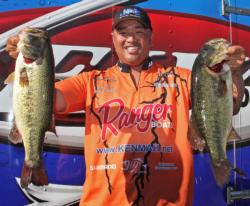 bag and although his productivity slipped a little today (21-9), he only lost one spot today as he reached tomorrow’s finale in third place with 46-9.

Mah said he fished some of the same water that produced for him on day one, however, the early bite he enjoyed yesterday didn’t materialize today. One thing he found to be important yesterday and today was working with the sun angles.

“I think it just positions the fish,” he said. “It’s putting them on (certain spots).”

Today, Mah caught one of his fish on a Spro frog and picked up the other four by flipping an Exite Craw with a punch skirt on 65-pound braid. The first several hours of his day were frustratingly slim, but Mah persevered and pulled together a good bag late in the day.

“At 12 o’clock, I had three 3-pounders, but there was a little 45-minute window when I caught (several good fish),” Mah said. “I was just really fortunate to be in the right place at the right time.” 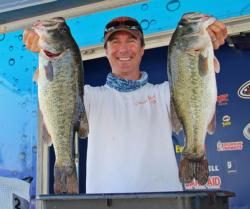 Oakley, Calif. pro Charley Almassey made a big day-two move from 15th place to fourth by bagging a 24-pound, 4-ounce limit and pushing his total weight to 45 even. Working the same general area as he did on day one, Almassey again found his fish in shallow grass beds. He has one main spot of about 50 square yards and a secondary of spot that he uses to give his main location a break.

“I’m fishing a pressured bay in the north end where everybody has been fishing the bank,” Almassey said. “The pushes the fish off the bank and they’ve schooled up in the middle of this bay. They’ve shifted into an area where you’d never think they were because the weeds are a lot sparser than I’m used to fishing. They seem to be herding bait right into this little pocket on the edge of a weed line. First thing in the morning, for three hours, it’s game on.”

Almassey said he caught his fish on a mix of finesse and reaction baits. Reaction baits got the early bites and then he switched to finesse tactics later in the day.

Daniels moves up to fifth 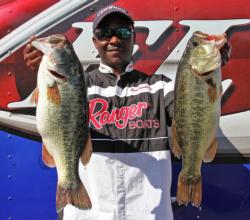 Daniels caught his fish on mix of swimbaits, jigs, flipping baits and Senkos. Swimbaits were most productive, but a late-day opportunity secured his final-round berth.

“With about five minutes until check-in, I caught a really nice one on a Senko that culled out my smallest fish and brought me up to (nearly) 24 pounds,” he said. “I mixed it up a lot today, but primarily I fished from zero to six feet. I caught them really good early and then it was just a grind.”

Shallow and shady the key for Leblanc 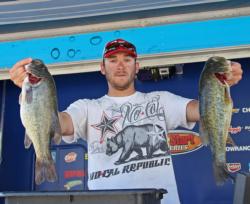 Chad Leblanc, of Sutter, Calif. demonstrated the power of consistency, as he nearly mirrored his day-one weight of 19-6 with 19-9 on day two and marched up the standings from 8th place to first with 38-15. Leblanc credited a good practice period for providing helpful perspective.

“I got to practice with (Calif. pro) Cody Meyer (23rd place) and I watched and noticed the fish were doing certain thing,” he said. “I was fortunate that I drew two pros that allowed me to fish to my strength. I’m throwing a lot of topwater. I’m throwing it really slow and I’m looking for shade. In practice, it seemed like when the sun got high, the fish were located in shade. They pulled really tight to the tules.

“The slower the retrieve the better and once they would come out, if you worked it fast like you were trying to get your bait away from them, they really ate it. It was awesome to watch.”

Leblanc fished the south end of the lake both days. He said he is very familiar with these waters, so applying what he learned in practice to geographic areas he already knew was s potent formula. 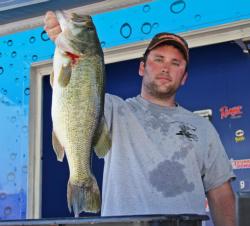