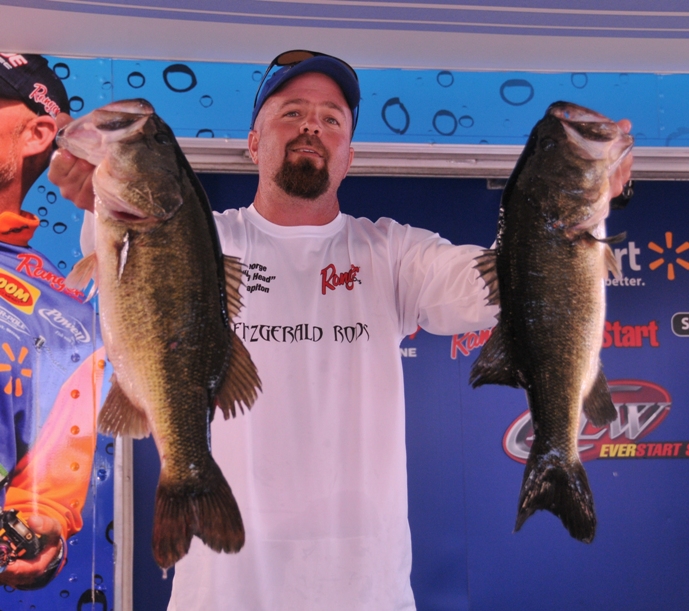 OKEECHOBEE, Fla. – The day-one takeoff of the EverStart Series Southeast event on Lake Okeechobee was like Christmas morning all over again. Even before dawn broke over the horizon, anglers were delirious with anticipation over opening the many gifts that Santa-chobee had promised them.

Those gifts were in the form of tight green mats of vegetation, adorned with bows of hyacinths, and anglers could not wait to see what big green monsters lived inside the promising packages.

But it appears that perhaps not all anglers had been good boys this year as many were sorely disappointed with what they received. By noon some pros would have even been happy with a couple of stocking stuffers for their empty livewells.

In short, the numbers of 20-pound limits – and even 30-pound limits – that were predicted failed to materialize, leaving many pros scratching their heads. Instead, a lone 21-pound, 6-ounce bag broke the 20-pound mark.

Some of the usual Big O suspects still topped the leaderboard at day’s end, but all were at a loss as to what happened to their fish. The number of bites pros were receiving fell off dramatically. The large concentrations of fish that continually thumped lines in practice had evaporated, leaving those who did well to scramble way more than they had planned to.

Leading the charge is George Kapiton of Inverness, Fla., with the 21-pound, 6-ounce benchmark. Kapiton finished second in the BFL held on Okeechobee last weekend when he caught 28 pounds.

Today Kapiton revealed he is fishing the same pattern as he did in the BFL, but he is in a completely different area.

“This week I ran the whole lake looking for similar stuff like I fished in the BFL,” he said. “I found it in some other places, and that’s where I fished.

“I’m really trying to save that place where I fished last week for Saturday,” Kapiton continued. “My plan today was to just survive doing the same thing in other places, buy my time and save those fish for as long as I can. I probably ran 25 different places today.”

Kapiton, like others atop the leaderboard, is flipping and pitching.

“I’m running a pattern, and I know the right kind of place when I see it,” he explained. “But a lot of times I’ll see what I’m looking for from a distance, and once I get in there and stand up in the bow, I realize it does not exactly fit the bill – the water will be a little dirtier or the grass consistency won’t be just right – and I’ll move on without even making a cast. It’s pretty specific.” 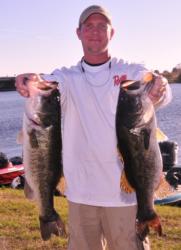 The friendship started in the FLW Tour Open last year when McMillan and Tharp fished the same area to finish first and second, respectively. During that tournament, the two pros were in such close proximity they could see each other catch fish in a blow-by-blow battle for the win. At one point in the heat of battle, Tharp broke his best flipping stick. McMillan immediately offered him one of his, claiming he didn’t want Tharp to have any excuses should he not win. After the event both admitted that the intense competition between them pushed their game to another level and deepened their respect for each other as anglers.

Recently their friendship grew tighter in the wake of McMillan’s tragic loss of his father, Okeechobee fishing legend Jimmy McMillan. So what are the chances that the two pros are now tied for second place in the EverStart with the exact same weight of 19 pounds, 12 ounces? Well, call it uncanny, but it happened.

Both pros are flipping – in different areas this time around – but both were surprised as to the drastic drop in the number of bites they received today.

“I don’t know what has happened; I really thought it was going to be awesome today,” McMillan said. “I only got a third of the bites I had been getting in practice, and I don’t know why. I only caught seven keepers today. The bites were not near as concentrated as they have been. I had to really run around to a bunch of different places to catch what I caught. And what bites I did get were really funny – they would just peck at it and not really eat it.” 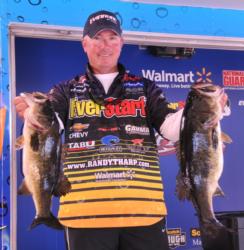 Tharp’s limit included the Big Bass of the day in the Pro Division: 7 pounds, 12 ounces and worth $300.

Tharp, too, is flipping, and his bites fell way off as well.

“The big ones had been grouped up a lot better, but today the bites were much more scattered out,” he said. “So instead of really grinding it out in one or two areas, I started covering as much water as possible. I probably hit 20 places on the day.”

“The first few little ones I caught may have been keepers, but I didn’t even measure them,” Tharp added. “By noon I didn’t even have a keeper so I started measuring the little guys and keeping them just to have something in the well.” 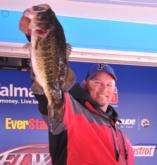 Lane also dedicated himself to the flipping game, but like others found it to be much tougher than he expected.

“In practice, if you got one big bite, you could get more big bites right in the same area,” he said. “Today, I finally caught a big one and seined the place for another three hours and only caught two tiny ones in that area. I just does not make sense.”

Rounding out the top 10 pros in the EverStart Southeast on Lake Okeechobee after day one:

Justin Jones of Apex, N.C., and Vince Parker of Keystone Heights, Fla., both hold the lead in the Co-angler Division, each with 12 pounds, 2 ounces. 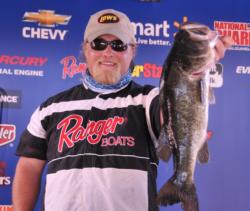 Richard Damianos of Cortland, N.Y., is in third place with 12 pounds, even.

Aaron Fahnestock of Enterprise, Ala., grabbed the fourth-place spot among the co-anglers with 11 pounds, 15 ounces.

Curtis Seale of Madison, Miss., caught the Big Bass in the Co-angler Division on day one weighing 7 pounds, 13 ounces, worth $200.

Rounding out the top 10 co-anglers in the EverStart Southeast Division event on Lake Okeechobee after day one: