McMillan on top in EverStart Series 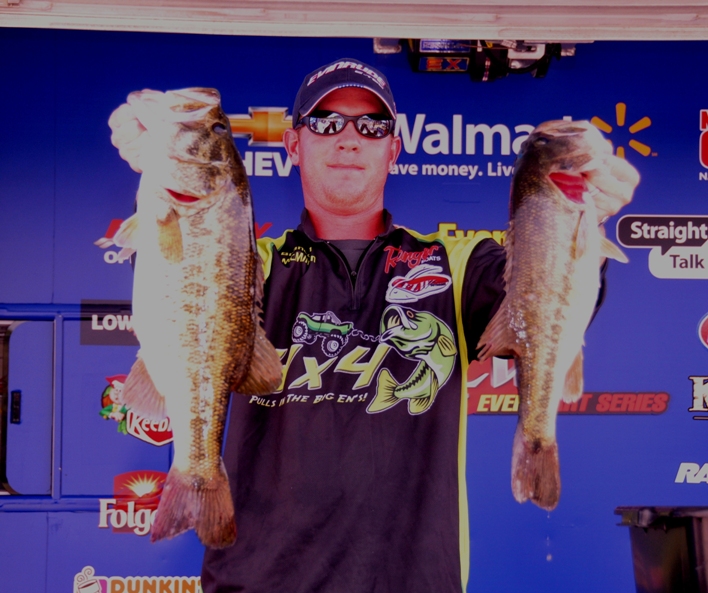 BAINBRIDGE, Ga. – Name a phase of the bass spawn and it’s represented in the top five standings in the EverStart Series Southeast event on Lake Seminole after day one.

The mild winter and very early spring have greatly accelerated the spawning cycle of bass on Lake Seminole. Normally this time of year would see bass in a full blown spawning mode in Old Sem’s backwaters. But now it appears most are done spawning; a few are still spawning; and a very scant few are moving up onto the outside bars with the impending new moon.

Within the top five are representatives from each camp, starting with Brandon McMillan of Clewiston, Fla., who has tapped a post-spawn feeding frenzy to take the lead on day one with 21 pounds, 15 ounces.

McMillan is catching his fish early and fast, targeting an isolated shad spawn.

“They were chomping right off the bat this morning,” McMillan said. “I got to my best spot at 8:07 a.m. and had what I weighed in by 8:40. I culled twice and then left the area. It’s early and it’s quick. I did go back later in the day to see if I could figure out how to catch the fish another way, but I couldn’t get them to bite anything else.”

Understandably, McMillan is holding off in revealing his primary lure at this point, but did admit that none of his catch came on an Alabama rig.

“I’ve got another spot where the fish are doing the same thing, but the fish are not near as big,” McMillan added. “It’s the exact same kind of pattern, the fish are just smaller.” 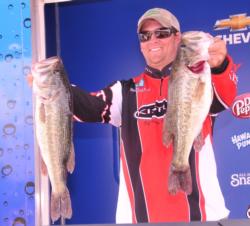 Enfinger is catching post-spawn bass as well in depths of 5 to 12 feet of water.

“I only got four bites, but they’re the right size,” Enfinger said. “These are all post-spawn fish. The shad are just starting to school in this one area and the fish are coming out of the bedding areas to feed. The bass are long, skinny and beat up; I can tell they are fresh off the beds.”

Enfinger noted that he has been fishing Seminole all his life and has never seen bass as far along this time of year as they are now.

“This lake is fishing like it’s May first,” he said. “The fish started bedding strong here in January, which I’ve never seen before. Knowing that, I decided a long time ago to target post-spawn fish for this tournament. I’m sure there are still some on beds, but I think the majority are now moving out.” 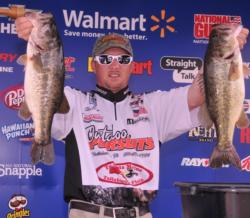 Clint Brown of Bainbridge, Ga., is in third place with five bass for 19 pounds, 15 ounces.

Brown is in the sight-fishing camp, but notes that with the lake dropping and the water warming, the sight bite is dwindling fast.

“I went straight to sight-fishing this morning and I caught the meat of what I had found today,” Brown said. “The lake has dropped about 10 inches in the last two days and now the wind is making waves on those shallow bedding areas on the bars and that really hurts. If it was calm and stable, I think some new ones would move up. But with the lake dropping and the wind blowing, they don’t seem to like that.”

As for tomorrow, Brown did say he found a pair bedding late this afternoon and will start on them tomorrow. 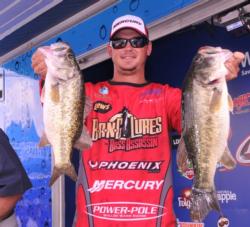 Drew Benton of Panama City, Fla., is in fourth place with five bass for 18 pounds, 15 ounces.

Just when it looked as if all the fish were done spawning, Benton believes he has found a place where the fish are just now moving up.

“I’m catching them out in front of spawning bars with a Carolina rig,” Benton said. “I’ll catch a few out in front of the bars on the rig and then occasionally move up and take a peek at the bar and see one or two spawning and I’ll sight-fish for them. It’s like they’re moving up on these places later in the day. But if I make a pass and don’t see any, I’ll back out and start dragging a rig again.” 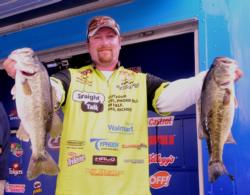 While Kenney is known for his prowess with the flipping stick, as of late he has traded the big stick for a cranking rod.

“Believe it or not, I never took the flipping stick out of the box today,” Kenney said with a laugh. “I caught everything on a crankbait – I kind of like feeling them pull back for change.”

Kenney said he is cranking within sight of where the bass have been spawning.

“I can see the spawning flats out in front of where I’m fishing,” he added. “I’m just out on the first little break in 5 to 6 feet water in front of those big flats.”

Rounding out the top-10 pros in the EverStart Series event on Lake Seminole after day one: 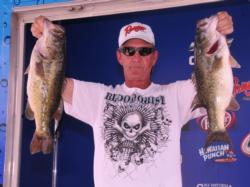 Douglas Tull of Felicity, Ohio, leads the Co-angler Division of the EverStart Series event on Lake Seminole with a five bass limit for 18 pounds.

Tull said much of his successful bounty came on topwaters today.

Justin Jones of Apex, N.C., holds down the second place spot among co-anglers with four bass for 16 pounds, 6 ounces.

Joe Ventrello of Orlando, Fla., is in third place in the Co-angler Division with a five bass limit worth 14 pounds, 11 ounces.

Robert Wood of Jupiter, Fla., rounds out the top five with 14 pounds, 7 ounces.

Rounding out the top-10 co-anglers in the EverStart Series event on Lake Seminole after day one:

Day two of the EverStart Series Southeast Division on Lake Seminole will begin Friday at 7:30 a.m. at the Earle May Boat Basin in Bainbridge.