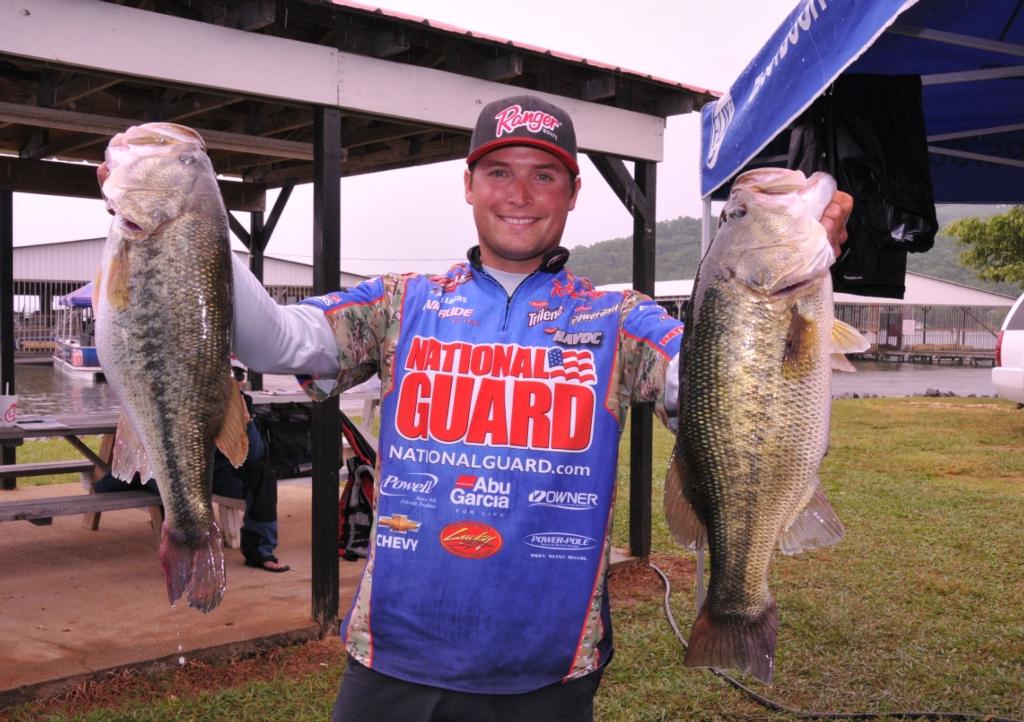 GUNTERSVILLE, Ala. – Justin Lucas of Guntersville, Ala., was exasperated and nearly out of breath when he reached the EverStart Series Southeast weigh-in stage this afternoon.

“People want to know why I moved from California to Alabama to bass fish?” the National Guard pro gasped. “Well here’s the reason right here.”

And with that Lucas heaved 29 pounds, 6 ounces of Lake Guntersville bass up into the scales.

“That was the most incredible day of fishing I’ve ever had,” Lucas laughed. “They’re all freaking donkeys!”

Donkeys indeed! In all it was a day of donkeys at G-ville. Consider that six limits were brought in over 25 pounds; 10th place currently stands at 22-15 and in all there 18 limits over 20 pounds.

All day rain and clouds seemed to spark a big fish feeding frenzy that few were expecting.

As for Lucas, his monster limit of fish included a 7-5, a 7-8 and another 6-pounder and all came in a 30 minute flurry that he never expected.

“I was expecting about 20 pounds today,” Lucas said. “That’s the size fish I could catch shallow – 20 pounds at best. But I had one deep spot – it’s a sweet post-spawn place – and I rolled in there and caught two sevens and a five in a matter of 30 minutes. It was sick.”

Lucas thinks his post-spawn spot will keep replenishing with big fish the next two days.

“It’s just a perfect post-spawn place that fish should keep funneling to,” he said. “I might not catch them like I did today again, but I think it’s good for a couple of more big ones before the tournament is over.” 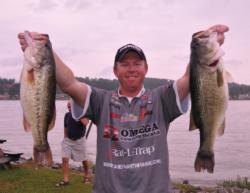 Casey Martin of New Market, Ala., who won the BFL over the weekend, is in second place with 27-9.

Martin won the BFL with 24 pounds. Today he weighed in 3 pounds, 9 ounces heavier than in the BFL and he’s in second place.

“I had one good deep spot that I had planned to save until Saturday,” Martin said. “I had planned on fishing shallow and just junking it up to about 20 pounds to just survive. At about 10:30 all was going according to plan. I had about 17 or 18 pounds fishing shallow and that’s when I ran across Justin Lucas who told me JT (Kenney) had a monster bag. So I completely scrapped the shallow stuff, went to the deep spot and caught fish after fish for 20 minutes straight until I culled everything I had. It was just unreal.”

“I caught more than I wanted to today,” he added. “But when everyone in the top 10 has 22 pounds, I had to go for it all just to stay on pace for making the cut.” 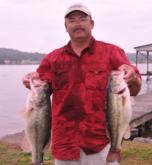 Rick Cotten of Guntersville, Ala., stands in third place with 25 pounds, 11 ounces.

“I fished deep all day,” Cotton said. “I have about 18 deep places total and only sampled a few spots today so hopefully I still have plenty left to go to. They bit better in this rain than I thought they would. Hopefully the bite will stay strong with the forecasted sunshine tomorrow.”

Gary Fleming of Russellville, Ala., is tied for fourth with 25 pounds, 9 ounces.

Fleming’s day started with a 7-pound, 13-ounce bass on his first cast of the day. That bass held up as the big bass of the day on day one.

“When I caught that one on my first cast, I knew it was going to be great day,” Fleming said. “And all I’ll say about it is that I did not use an Alabama Rig.” 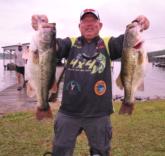 Fleming, too, caught his fish deep, suspended off the sides of ledges.

Bryan Gregory of Fort Payne, Ala., is also tied at fourth place.

While others in the top five probed deep, Gregory used the rain and clouds to his advantage and caught all his fish on topwaters.

“I don’t get many bites on top, but when I catch one, it’s a big fish,” Gregory said. “I only caught eight keepers on the day, but they were all nice ones. When you can catch that kind of weight on topwaters, it’s a lot of fun.”

Rounding out the top-10 pros in the EverStart Series event on Lake Guntersville after day one: 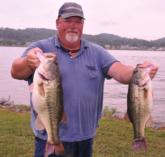 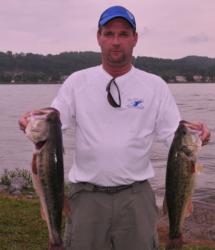 Bobbitt shared a boat with pro Bryan Gregory today and also used topwaters to do his damage.

“It’s not like we caught a lot of fish,” Bobbitt said. “In fact, I only caught five fish on the day – the five fish that I weighed in – that was it. Only big ones would come up for that topwater.”

Ed Shannon of Milford, Ohio, is in second place in the Co-angler Division with 20 pounds, 7 ounces.

Jason Atkins of Section, Ala., is in third place in the Co-angler Division with 19 pounds, 15 ounces.

Tim Windsor of Prattville, Ala., holds down the fourth place spot among co-anglers with 19 pounds, 4 ounces.

Justin Sward of Birmingham, Ala., is in fifth place with 19 pounds, 2 ounces and caught the big bass on the day in the Co-angler Division weighing 7 pounds, 13 ounces.

Day two of the EverStart Series Southeastern on Lake Guntersville will begin at 6 a.m. on Friday at Val Monte Resort.