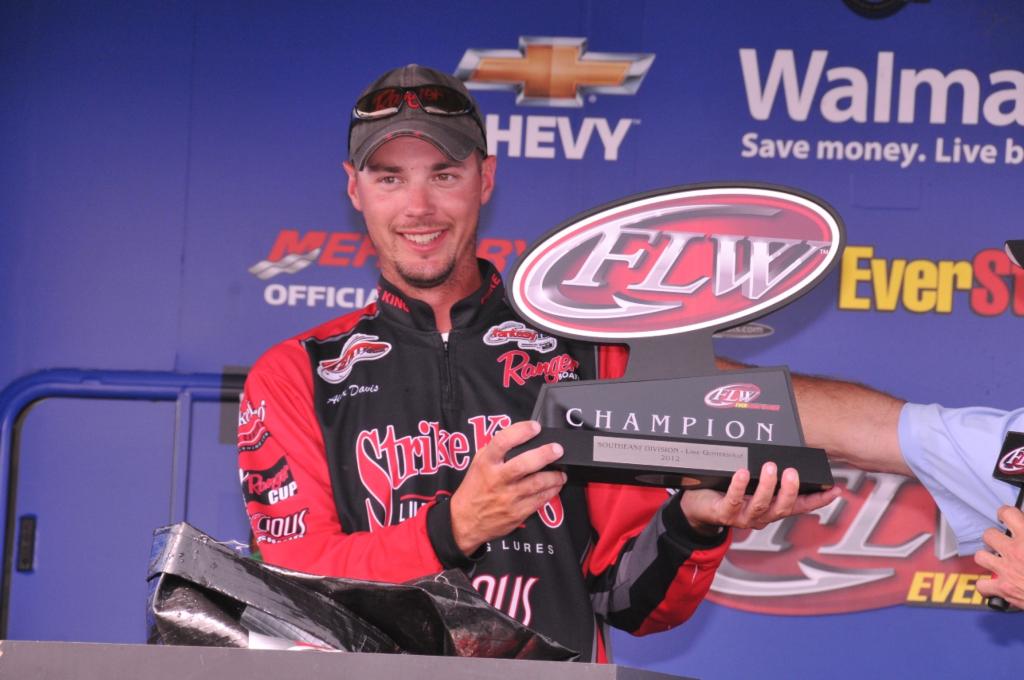 GUNTERSVILLE, Ala. – In October of 2011, young Alex Davis of Albertville, Ala., was set to make his pro debut in the FLW Tour Open on his home lake in a big way.

Davis, also know as The Spinnerbait Kid for his love of spinnerbaits and his guide service of the same name, is a Guntersville expert and fishing conditions were perfect for him to strike in October: super tough.

Ultra tough fishing often gives locals the advantage, especially in the fall, due to their intensive knowledge of a fishery. Hence, the stage was set up perfectly for Davis.

Then the unthinkable happen: The Alabama Rig bomb dropped. Paul Elias and a handful of other pros dominated the event with what has arguably become the most productive fishing contraption in the history of fishing.

Despite not having an Alabama Rig in October, Davis still managed to finish 10th – a small consolation for what could have been.

But instead of lashing out at a technique that very well could have cost him a $100,000 win, Davis went right to work learning everything possible about the new way of catching bass on TVA impoundments.

And this week, Davis’ willingness to embrace and understand the Alabama Rig – or castable umbrella rig – paid off handsomely with his first EverStart Series win worth $35,000 plus a new Ranger Boat.

“What an amazing day,” said Davis after his win. “I probably culled through 75 pounds of bass to get to my weight today. The number of 4.60 and 4.70 bass I threw back was just unreal.”

Speaking of weight, Davis’ daily totals included, 24-9, 30-2 and 27-7 for a three-day total of 81 pounds, 12 ounces. Needless to say, the quality of bass that Guntersville is pumping out right now is just mind boggling. 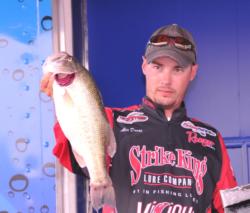 Most of those big bags came from the lower end of the lake in Guntersville’s deepest water – from 20 to 40 feet.

“The average depth of my fish was about 29 feet,” Davis revealed. “I did fish shallow some this week, but without a doubt all my big fish came deep, primarily from two spots. One was a creek channel ledge that drops to 30 feet and the other was stumpy ledge on the main river.”

“The night after the FLW Tour Open in October I stayed up all night making Alabama rigs. And from that point in time until now, I have schooled myself on it. This winter I saw things with that rig that would blow your mind – 50 fish days of fish over 4 pounds.” 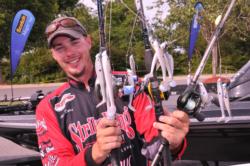 “They said it would be the miracle cure that would allow anyone and everyone to win tournaments and I’m here to tell you that’s not the case. Guntersville is where the Alabama rig started and look at who has won the BFL’s and big tournaments here for the last eight months. Look at who did well in this tournament. It’s the same names that always do well here. My point is you still have to know when and where to throw it. The same guys are still going to catch them, they just have a different tool to work with now.”

As for Davis’ future in professional fishing, look for him to possibly fish the FLW Tour next year.

“I really owe this win to my mom and dad,” Davis added. “They moved the family down here seven years ago just so I could fish, start a guide service and try to fish professionally. And this win couldn’t have come at a better time. I’ve been saving my money with plans of fishing the FLW Tour next year, so this is really going to help.”

On day one of the EverStart Series Justin Lucas of Guntersville, Ala., brought what he called “donkeys” to the stage with 29-6 to take the early lead and said he had experienced the best day of fishing in his life.

Little did he know that two days later he would actually trump that with another “best day ever” with an astounding weight of 31-10, the biggest bag of the tournament, which landed him in second place with a three-day total of 78 pounds, 8 ounces. 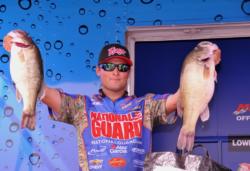 And despite the monstrous two days, it was day two, when he brought just 17-8 to the scales, that Lucas could not help but lamenting about.

“Day two killed me,” the National Guard pro said with a degree of frustration. “Don’t get me wrong, I had two days of a lifetime here that I will never, ever forget, but the 17 pounds on day two cost me the win.”

Lucas fished one spot with one bait all week.

“I had one ledge at the mouth of a creek channel that dropped from 15 to 25 feet that was just insane with big fish,” Lucas said. “I was boat number 133 the first day and when I got there I could not believe no one else had stopped on it; I had it to myself. I camped there all week.”

“I’d cast it out there, let it go to the bottom and then swim it through the suspended fish out there in the channel,” Lucas described. “They’d just crush it, man!”

“The first and third days they ran no current and on day two they ran some current and I think that’s what hurt me,” he added. “When there was no current and those fish were suspended, I had them dialed. But when they ran current on day two, the fish repositioned and I just did not adjust fast enough.” 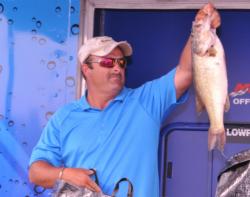 Rick Cotten of Guntersville, Ala., finished third with a three-day total of 76 pounds, 3 ounces.

Cotton took the unofficial award for most number of lures that caught fish during the week including: a crankbait, a jig, an Alabama rig, a single swimbait, a worm and a spoon.

“You name it and I probably caught a fish on it this week,” laughed Cotton. “When it comes to the lures, I call it junk fishing. But when it comes to the spots, they were very specific: river ledges that stair-stepped down into the main channel.”

“The shallowest spot shelved up to about 13 feet,” Cotton continued. “And my deepest spot shelved-up to 21 feet and stair-stepped down to 40 feet into the main river.” 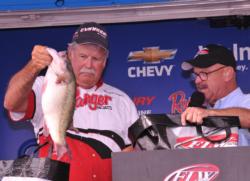 “The first day I tried to do my grass flipping deal up the river, but once I saw all those weights, I realized that wasn’t going to cut it, so I headed out deep with an Alabama rig,” Deakins said. “I was staying with Alex and he kind of clued me in on those deeper fish so that’s what I did the next two days.”

Deakins said his Alabama rig is a homemade version made locally and he adorns them with an unnamed swimbait body that is, in his words, “really big.”

Martin also fished deep during the week relying on two versions of the Picasso School E Rig and an Omega football jig. 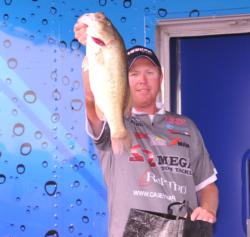 “One Picasso was the finesse version of the School-E-Rig,” Martin said. “I used Reaction Innovations Skinny Dipper swimbaits on that one and the other was the regular School-E-Rig and I ran 6-inch BassTrix Swimbaits on it. Once I got the fish fired up I could catch them on the big rig, but if things slowed down, I’d go to the smaller finesse version.”

8th: Gary Fleming of Russellville, Ala., three-day total of 69-9

Angler of the Year

Kent Ware of Wadmalaw Island, S.C., won the Strike King Angler of the Year in the Southeast Division with a total of 731 points. His finishes for the year included a sixth at Okeechobee, a 19th at Seminole, a second at Santee Cooper and 46th at Guntersville.