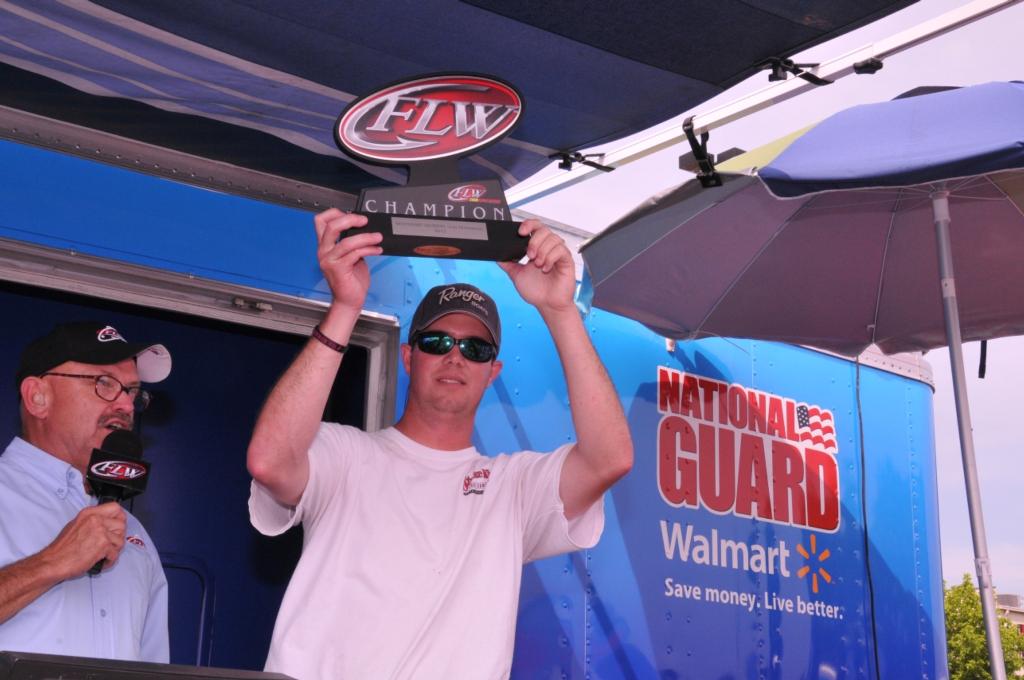 Justin Sward of Birmingham, Ala., wins the Co-angler Division of the EverStart Series event on Lake Guntersville with a three-day total of 62-12. Photo by Rob Newell. Angler: Justin Sward.
After a near win in South Carolina, co-angler takes victory in Alabama
May 5, 2012 • Rob Newell • Toyota Series

GUNTERSVILLE, Ala. – At the last EverStart Southeast event on Santee Cooper in April, Justin Sward of Birmingham, Ala., was leading the Co-angler Division going into the last day. Then after a lengthy fog delay, Sward failed to catch a keeper on the final day and finished second, missing the win by a mere 5 ounces.

This week, Sward redeemed himself with a win at Lake Guntersville. And instead of playing around with ounces, Sward dominated the co-angler field checking in catches of 19-2, 21-1 and 22-9 for a three-day total of 62 pounds, 12 ounces, winning by over 9 pounds. 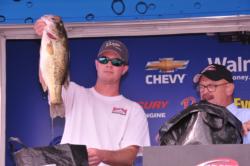 “What a relief!” Sward exclaimed after his win. “I travel with a bunch co-anglers who flat sack them. They all have won; some even multiple times. So to finally get a win is really a relief.”

“It’s so weird how this co-angler stuff works,” he continued. “You can draw the best stick on the lake and he makes a couple of bad decisions and you can catch nothing. At the same time, you can draw a guy who has never seen the lake before and both of you sack them up. You can just never tell what’s going to happen. But this week it all finally lined up for me. I drew some real sticks and they were all catching them.”

During the week Sward fished with pros Webb Collums, Casey Martin and Alex Davis. His first fish of the week was a 7-pound, 13-ounce lunker that took big fish honors in the Co-Angler Division and set the pace for his winning week.

Like his pros, Sward’s fish came deep on various single swimbaits and Alabama rigs. Today three of his better fish came on a ¾-ounce Scrounger. 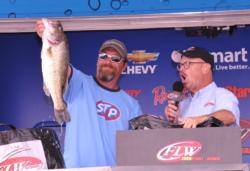 Jason Atkins of Section, Ala., finished second with a three-day total of 53 pounds, 11 ounces.

His bait of choice all week was a 1/2-ounce Chatterbait in a shad color teamed with a Fluke.

“No matter where my pro went, the Chatterbait is what I threw,” Atkins said. “Even when they fished deep, I’d cast it out, let it go to the bottom and then swim it back in just like a single swimbait.”

Shannon’s key lure for the week was a 1/2-ounce Scrounger head teamed with a Strike King 3X Zulu Shad. 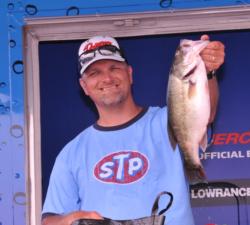 Keller, Mims round out top five

Steve Keller of Bethel, Ohio, finished fourth with a three-day total of 42 pounds, 6 ounces. He found success on a Zara Spook in a bone white color.

Josh Mims of Clanton, Ala., rounded out the top five with a three-day total of 41 pounds, 4 ounces.

Co-angler of the Year

Taking the Co-angler of the Year in EverStart Series Southeast Division is Cal Clark of Pulaski, Tenn., with a total of 742 points. Clark’s phenomenal season included a second-place finish at Okeechobee, back-to-back wins at Seminole and Santee Cooper and then a 58th at Guntersville.