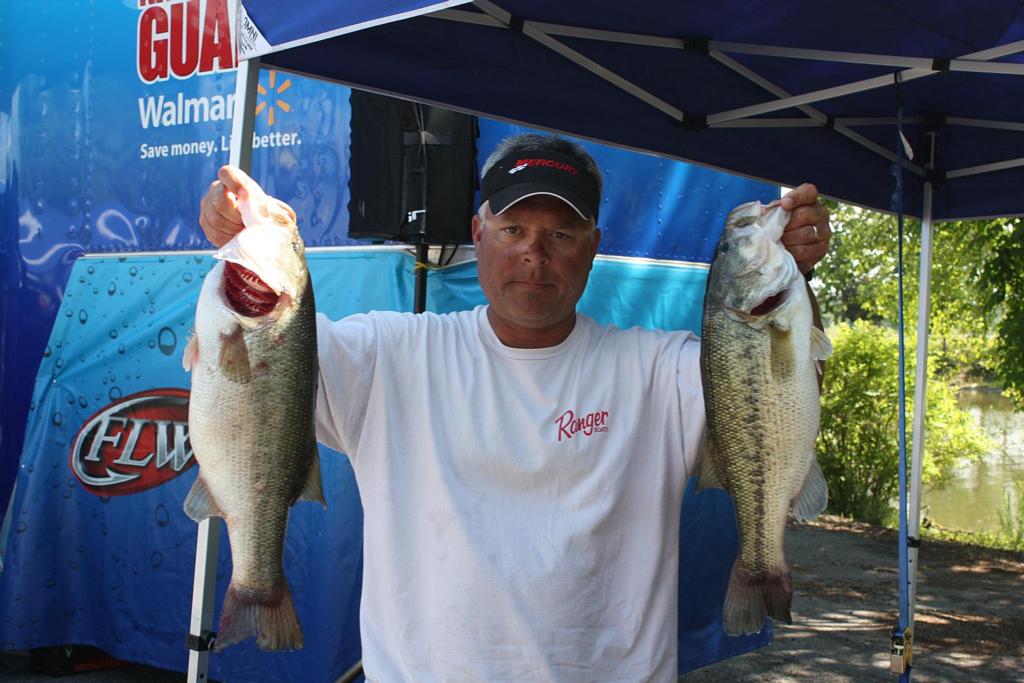 BENTON, Ky. – Although the fishing conditions left most competitors scratching their heads on the first day of EverStart Series Central Division competition on Kentucky Lake, Lance Ricketts still hauled in a 21-pound, 7-ounce limit of bass to take the early lead.

Kentucky/Barkley fishing could be described as being a lot like pizza. Even when it’s bad, it’s still good. The recurring theme of the day seemed to be the idea that the lakes are just fishing differently this year. However, while today’s weights may be a bit down from years past, they are still impressive.

Ricketts’ 21-pound, 7-ounce catch was one of only two sacks of bass that crossed the 20-pound mark, but the pros and co-anglers still weighed in more than 2,700 pounds of fish total. Most reported a tough bite, and many blamed it on the low water levels. According to tournament emcee Dave Maxfield, normal pool here is around 359 feet. Today, it hovered just above 356 feet – which was actually a bit higher than it was even yesterday.

Ricketts, who hails from Madisonville, Ky., did not exactly expect to bring in the leading limit of bass today.

Ricketts estimates that he caught 20 keepers today on several spots. He’s making a long run on Lake Barkley, throwing a jig in water he described as fairly shallow. 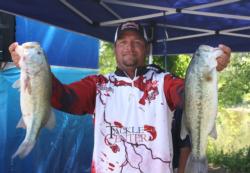 King also has one of the day’s most interesting backstories, having spent a mere eight hours in practice for this tournament because of some recent surgery he had.

“It’s the best day I’ve ever had fishing,” King said. “The good Lord blessed me today.”

King’s day was so good, in fact, that he quit fishing at 10 a.m. after catching no fewer than 30 keepers. He let his co-angler fish while he hunted around for new spots, making up for his lost practice time.

He said of the four schools of fish he found in practice, he hit only two of them today, primarily using a 5-inch Top Shelf Magnum Deep Runner swimbait and a Strike King 6XD. 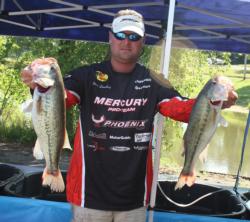 Ending day one in the No. 3 position is Jason Lambert of Pickwick Dam, Tenn., with a five-bass limit weighing 19 pounds, 7 ounces. Lambert was among the many talking about today’s slower bite.

“Today was actually a lot slower than practice,” he said. “We made a really long run and burned about 45 gallons of gas today.”

Lambert caught all his fish today on ledges and said that his practice gave him the confidence that he could catch 20 pounds every day. He wasn’t sure what affected the bite today, whether it was the cold front that moved in or any of the other factors mentioned by competitors.

“I didn’t stick around places very long,” he said. “If they weren’t biting I’d just go on to the next one. I don’t know why, but it was just different.”

Robertson, McGinnis round out top five 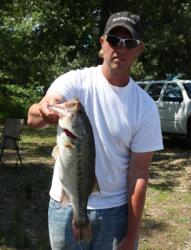 In fourth place is Matt Robertson of Central City, Ky., with a day-one haul of 18 pounds, 7 ounces.

“I stayed fairly close and fished the ledges,” Robertson said. “I’ve got four or five spots, but other than that, it’s dry out there.”

Behind him in fifth is John McGinnis of Clarkson, Ky., with a limit weighing 17 pounds, 9 ounces. Taking sixth is 2011 victor Jeremy Ethridge of Nashville, Tenn., with a 17-pound limit that included a 7-pound, 4-ounce lunker, the heaviest bass of the day.

Rounding out the top-10 pros after day one: 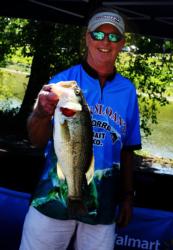 One boat brought in both of today’s leaders, as Ricketts’ co-angler Bill Bell of Smithville, Tenn., leads his division with a five-bass limit weighing 16 pounds, 3 ounces.

“It was a great day, and he is a great fisherman,” Bell said of Ricketts. “I couldn’t ask for a better partner.”

Bell caught his bass in shallow Lake Barkley water today on a jig.

“We went a long way, we burned a lot of gas, and we caught a lot of fish,” Bell said.

Bell normally fishes in the Pro Division but entered this tournament as a co-angler to mix things up a bit.

Carroll 8 ounces behind in second 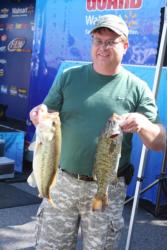 David Carroll of Manitou, Ky., is in second place in the Co-angler Division with 15 pounds, 11 ounces.

Behind him in third is Calvin Hemphill of Rison, Ark., whose limit weighing 15-10 included a 5-pound, 12-ounce kicker that took day-one co-angler big-bass honors.

In the fourth spot is Alan Woodford of Winslow, Ind., with a five-bass catch weighing 14 pounds, 13 ounces. Just 5 ounces behind him is today’s fifth-place qualifer, Leslie Coleman of Columbus, Ind., whose day-one limit weighed 14-8.

Rounding out the top-10 co-anglers after day one: