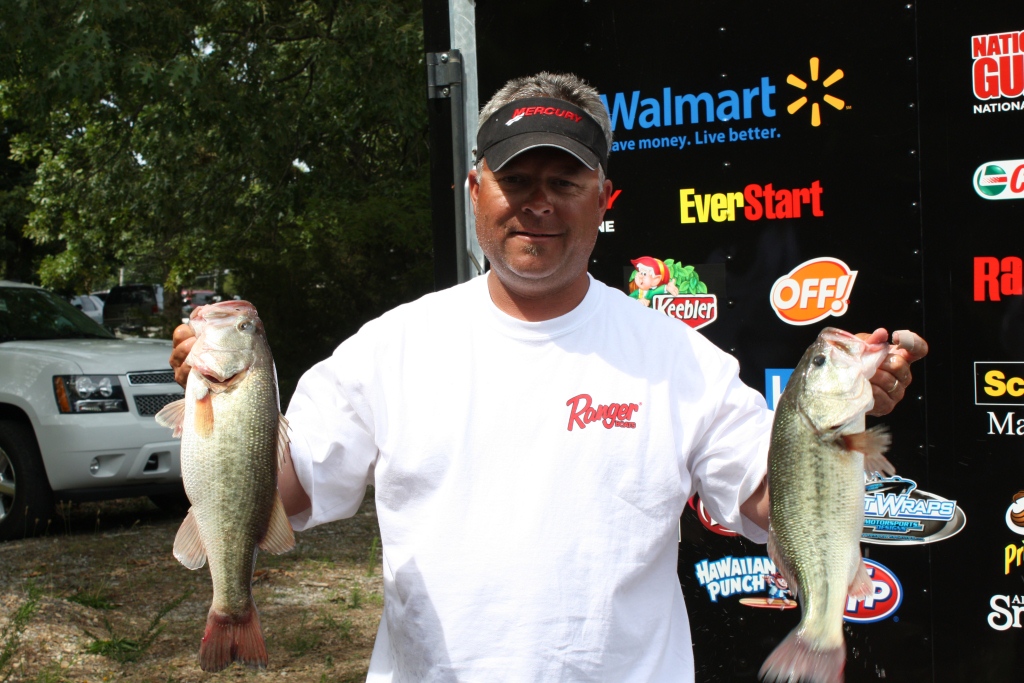 Lance Ricketts kept his perch atop the leaderboard with a two-day combined weight of 36 pounds, 1 ounce. Photo by Jennifer Simmons.
May 11, 2012 • Jennifer Simmons • Toyota Series

BENTON, Ky. – Though Lance Ricketts caught enough bass today on Kentucky Lake to remain at the top of the EverStart Series Central Division leaderboard, he will enter the final round with a razor-thin advantage.

Ricketts caught one of only two sacks yesterday that exceeded the 20-pound mark, but today he brought in five that weighed only 14 pounds, 10 ounces. That lifted his cumulative weight to 36 pounds, 1 ounce, just 3 ounces ahead of No. 2 pro Jason Lambert. In fact, only 4 pounds – or one decent Kentucky Lake bass – separate Ricketts from the No. 10 finalist Curt McGuire.

Weights were indeed down overall today, though not excessively, and six of the top-10 pro finalists managed to increase their weights from day one. Tomorrow, though, a large tournament will take place out of Paris, Tenn., complicating more than a few strategies, as making that long run down to Tennessee is commonplace and typically profitable.

Ricketts had some company on his honey hole today, which brought his numbers down noticeably. He also struggled to land keepers of the quality that he brought in on day one.

The other boats on his day-one spot forced Ricketts to fish different water, and he admitted the Paris tourney tomorrow might rain on his parade.

“I really don’t know about Saturday,” he said. “My plan was to fish around Paris – that’s where I went today. I guess I’ll just go fishing.”

Lambert’s weight falls but he rises to second 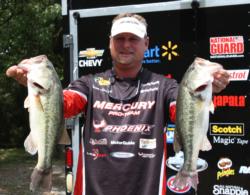 Early in the weigh-in, Jason Lambert of Pickwick Dam, Tenn., brought in a limit of bass weighing 16-7 that handed him the lead with a two-day total of 35 pounds, 14 ounces. He held that lead for quite a while until Ricketts finally toppled him, though not by much.

Lambert’s day-two sack was exactly 3 pounds lighter than what he weighed in yesterday because, like Ricketts, he struggled with finding quality keepers.

Worried about tomorrow, Lambert too is going “way past” Paris, and he plans to try again tomorrow, no matter the crowd.

Haynes jumps from 17th to third

Randy Haynes of Counce, Tenn., caught 15 pounds, 5 ounces on day one but brought in a limit weighing 19 pounds, 7 ounces today to bring his two-day total to 34 pounds, 12 ounces, good for third. His 19-7 stringer was the heaviest weighed in all day.

“I relocated some schools,” Haynes said, adding that he caught his bass cranking a Strike King 6XD.

He said the difference between yesterday and today was simply a matter of finding better fish.

“Today I took my time,” he said. Like Ricketts and Lambert, Haynes is making the long run south to catch his bass.

Griggs, Fields round out top five 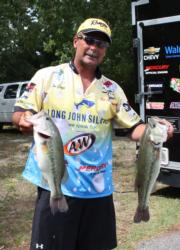 Tim Griggs of Paducah, Ky., edged his weight up slightly on day two to end the day in fourth place with 34 pounds, 4 ounces. His day-one limit of 16-8 was followed up today with another five that weighed 17-12.

“I caught probably 40 or 50 keepers,” Griggs said. “I think it’s better now than in practice because the fish are moving deeper.”

Griggs is catching his deep-water bass on crankbaits.

David Fields of Murray, Ky., will enter the final day of competition from the fifth spot with a two-day catch of 33-15. He improved greatly upon his day-one catch of 14-9 with a five-bass limit today weighing 19 pounds, 6 ounces.

Rounding out the top-10 pros who advanced to Saturday’s final round:

Krassinger leaps from 58th to first in Co-angler Division 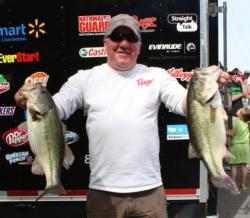 With a day-one catch of 10 pounds, 1 ounce, Rick Krassinger of House Springs, Mo., probably didn’t think he had much of a chance to make the cut. That all changed with the heaviest co-angler weight of the tournament thus far – a five-bass day-two limit that tipped the scales at 19 pounds, 4 ounces, bringing his two-day total to 29 pounds, 5 ounces.

Krassinger heads into the final round with a 1-pound, 11-ounce advantage over his nearest competitor. He fished today with pro Chad Pipkens of Holt, Mich., who finished the tournament in 27th.

“I threw big jigs on ledges in Kentucky Lake,” Krassinger said. “We made a long run today. I’m ready to win it.”

Day-one co-angler leader Bill Bell of Smithville, Tenn., brought in only three bass today, but he brought in one that counted big – a 6-pound, 12-ounce kicker fish that brought his day-two total to 11 pounds, 7 ounces and earned him $200 in co-angler big-bass honors.

Bell caught 16-3 yesterday from the back of Ricketts’ boat, making his two-day catch weigh in at 27 pounds, 10 ounces.

“I did catch quite a few short fish,” he said. “Some were just an eighth of an inch shy. But it’ll be fun tomorrow. There should be 10 good fishermen, and I’ll hope for the best.” 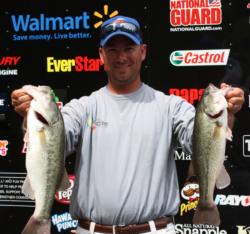 D.J. Smith’s day-one weight of 13 pounds, 7 ounces was followed up today by almost the same catch, as he weighed in 13 pounds, 6 ounces today to bring his cumulative total to 26-13, good for third.

“It was tougher fishing today than last week in practice,” he said. “I didn’t get my limit until the last 45 minutes.”

Smith and his partner fished the ledges today, having not found much to keep in the shallow water.

In fourth on the co-angler side is Scott Stallings of Glencoe, Okla., with a two-day catch of 26 pounds, 6 ounces. Behind him in fifth is Cody Kelley of Conway, Ark., with 25-14 over two days.

Rounding out the top 10 co-angler finalists: