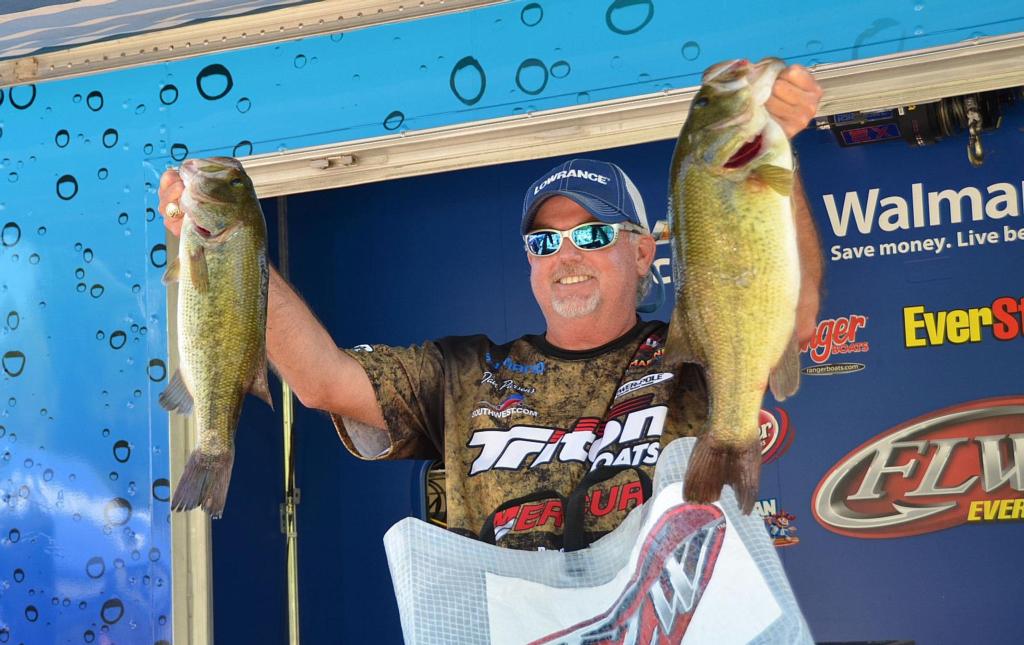 LA CROSSE, Wis. – When Dave Parsons made the 1,000 mile trek from Yantis, Texas, to La Crosse, Wis., he had two things on his mind – golf and fishing. Last week, he placed second in his golf tournament and after catching three sizeable bass today he’s leading the EverStart Series Central Division event on Pools 7, 8 and 9 of the Mississippi River.

While Parsons’ home state sticks out on the leaderboard, he’s actually quite comfortable with river fishing. His practice went well and he was hoping for 9 or 10 pounds on opening day. But at 7:30 this morning his main engine broke down.

“I basically put the trolling motor down and just fished,” said Parsons, who won the 2008 EverStart event on Lake Texoma. “When I trolled into my second spot I really started having success.”

Parsons three-fish stringer officially weighed 12 pounds even and was anchored by a 5-7 brute, the Snickers Big Bass of the day.

“With the state of Wisconsin mandating that we keep only three bass, that 5-7 was a real bonus,” added Parsons, a captain for Southwest Airlines out of Dallas.

While most of the field is fishing shallow, Parsons said he has located something special offshore.

“I’m basically dragging and cranking. My best bite has been on a deep-water shell bed. I’m very pleased with how today went and I’ve got a back-up spot that’s pretty good too. Even if I can’t my engine fixed tonight I should be able to troll to both of my spots tomorrow.” 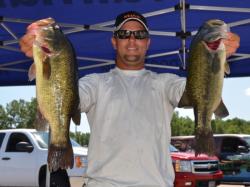 Three weeks ago Paul Malone made the short trip up from the Quad Cities to do a little pre-practicing. During that time, he found what he called the “perfect spot” that contained a combination of pads, duck weed and clean water. It was so good Malone was extremely nervous it wouldn’t hold, but it did.

After quickly reacquainting with the area, Malone sacked an 11-pound, 3-ounce limit. His big fish of the day weighed 4 pounds, 7 ounces.

“I broke my rod in three places on that big one and had to handline it in,” the Pleasant Valley, Iowa, pro said.

A key adjustment allowed Malone to stick with his pattern.

“Today the wind blew in the duck weed and made it kind of tricky; I don’t think the fish could find the frog. So I went out and worked the outside edge. Even with the wind, this spot still produced. Based on what I’ve seen I’m convinced the fish are there to win.”

In addition to frogging, Malone tried punching mats, but it wasn’t nearly as successful. 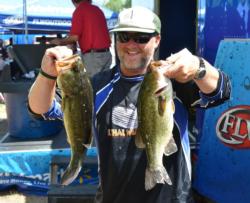 Local schoolteacher Nick Okeefe also caught 11-3, but his weight came from swimming a Lethal Weapon jig with a single-tail grub.

“Today was tough until this wind came up,” said Okeefe, who teaches physical education at Summit Elementary in La Crosse. “I think I only caught 10 keepers, but in this tournament it’s all about catching the right keepers.”

Okeefe, whose big fish weighed 4-6, said he would swim the jig, pop it, stop it and drag it – targeting small groups of fish.

“That jig comes through every piece of cover in the river.” 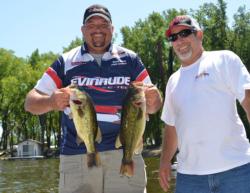 Rhead fished what he called a community hole and was pleasantly surprised he had it to himself all day long.

Rhead is targeting a 2-acre stretch of slop with a frog. He too is going after quality, not quantity as he caught only a dozen keepers on the day.

“Everybody and their brother is throwing a frog and that’s what I’m doing too. When it gets right, it really triggers those bigger bites.”

Rhead also won the $1,000 Evinrude contingency award at the Great Lakes Division BFL earlier this year on the Mississippi River. 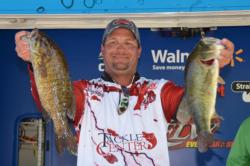 “I culled all three of those fish in the last 30 minutes and I really think I figured something out,” he said. “I’m covering a lot of water and looking for something real specific on the bank.”

While his heaviest fish came late, he caught `em all day long.

“I caught probably 60 bass today and practice was strong too. I cut my teeth river fishing in Arkansas and this place is just awesome. Coming in, I figured if I could catch three 3-pounders a day I’d have a shot at the top 10.”

If he has another successful day tomorrow, he’ll likely leave La Crosse as the Strike King Angler of the Year leader in the Central Division.

Rounding out the top-10 pro leaders at the EverStart Series Mississippi River event: 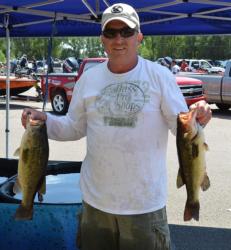 Tim Linenberg was the only co-angler to crack the double-digit mark on day one – his three best going 10 pounds, 9 ounces. Linenberg only wishes the limit was the usual five, not three.

“The fishing was really good for us; we culled quite a few. I wish we could have weighed five because I would have had another 5 pounds easy,” said the Tomah, Wis., native.

Linenberg is a retired police officer and fishes the river whenever he gets a chance.

“I’m excited to be leading, but I know how that can change. I fished the BFL earlier this year when the 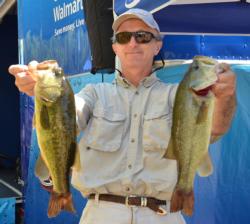 water was rising and it got tough.”

Richard Conrad of Hudson, Wis., placed second with 9-13, while Randy Warner of Elmwood, Ill., took third at 9-10. Jason Ferge of Markesan, Wis., finished the day fourth with 9-6 and Jamie Gomez of Onalaska, Wis., sits fifth with 9-3.

Rounding out the top-10 co-angler leaders at the EverStart Series Mississippi River event: