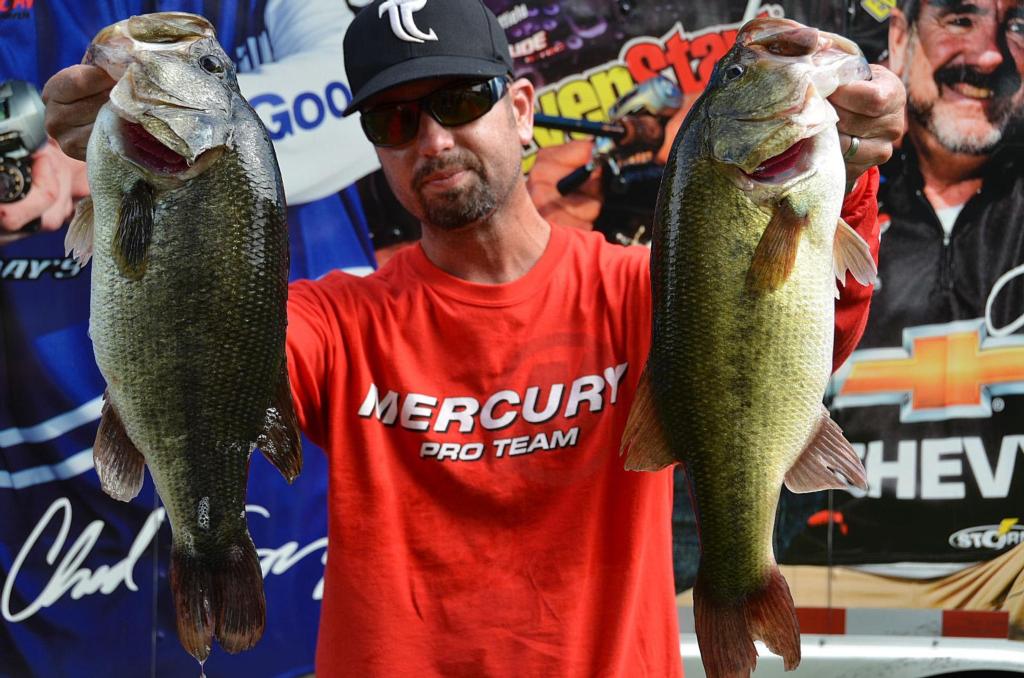 MARBURY, Md. – Heading into the final EverStart Series Northern Division event of the 2012 season, conventional wisdom and angler chatter suggested that 12 pounds a day would most likely be good enough for a top-10 finish. Others argued that bass-fishing fans just might see, assuming ideal conditions, some 15- and 16-pound bags on the high end. Well, apparently Virginia pro John Hutchins never got the message. After making his way to the weigh-in podium, Hutchins dropped a monster bag on the scales, rounding out at a whopping 20 pounds, 7 ounces to take a significant, if not entirely commanding, lead heading into Friday’s competition.

“I told my wife this morning that if I was able to get every fish in the boat that bites that I’d have a good chance to win the tournament,” said Hutchins. “Today, I executed perfectly so I’m really happy about that. I have about 15 different areas and only hit about four or five of them today. So overall, I’m feeling pretty good.”

Despite the fact that Hutchins hauled in an eye-popping catch, he said the day was far from easy.

“It was really a grind out there today,” said Hutchins, who didn’t want to comment on his bait selections or type of areas he was attacking for fear of giving away too much information to his competitors. “We had to work for every bite. I will say that I wasn’t running any tides; I don’t have time for that. For me, the key really was staying focused and not losing any fish at the boat.”

Hutchins, a resident of Warrenton, Va., said that he spent a good chunk of time today at a fairly popular area.

“I definitely had a lot of company,” he said. “But I got lucky and got a good draw today so I was able to (stake out) some areas. But tomorrow I’m not going to have as good of a draw so I’m not entirely sure how that will play out.”

Hutchins believes that if a few things go his way he should have little trouble landing a day-two catch anywhere from 14 to 17 pounds.

“But that all depends on being in the right place at the right time,” he said.

Hutchins also walked away with the day’s Big Bass award in the Pro Division after landing a 5-pound, 7-ounce largemouth. 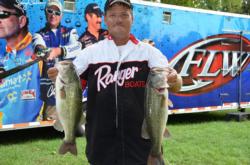 With pros hauling in 113 total limits (out of 129 competitors) and 15 pros eclipsing the 15-pound mark, it was clearly a banner day of fishing for the field. And that certainly applied to Walter “Mike” Snider as well. Boating a total catch of 17 pounds, 11 ounces, Snider found himself at the end of the day just 2 1/2 pounds or so off the lead. And he had the rain to thank for it.

“It was a good day,” said Snider, who hails from Mount Airy, Md. “It was really slow in the morning but once the rains started, the fishing picked up right away. I was struggling at first, but about an hour after the rain started I had my limit. I was just hoping for 15 pounds today, so I’m happy.”

“I had five different spots but I wound up staying at one of them all day long,” he said. “I was catching a ton of fish. But the incoming tide was absolutely important to me.”

As for tomorrow’s competition?

“I’m going to do the exact same thing,” he said. 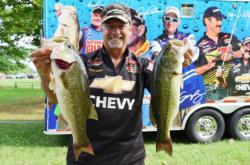 Fishing with a completely carefree attitude clearly paid off for Chris Dillow in today’s competition. When Dillow finally returned to the marina and hoisted his catch onto the scales, the Waynesboro, Va., resident found himself in third place overall with a total catch of 17 pounds, 1 ounce.

“I caught about three or four limits with it,” he said. “I was basically targeting grass and wood all day long. I really wasn’t messing with the tides too much. And Hopefully I can do it all over again tomorrow.” 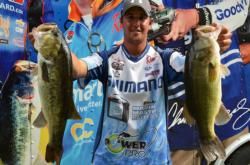 As one of the few Canadians fishing in the event, Cory Johnston of Peterborough, Ontario, did his country proud … as usual. Boasting a total catch of 16 pounds, 9 ounces, Johnston grabbed hold of fourth place overall.

“Fishing is always good on the Potomac,” he said. “I figured that 15 pounds a day should be good enough to win this tournament. So I’m definitely happy coming back here with over 16 pounds.”

Johnston said that he landed the majority of his catch flipping a Punisher Jig.

“I was flipping grass to make sure I got those bigger bites because that’s the key here,” he said. “You pretty much need a few 4-plus-pound bites every day if you’re going to have a chance to win here. And the Punisher Jig works really well. It’s made by a friend of mine from Canada and it’s a little smaller than most jigs and it seems to catch a lot more fish.”

Like many of the pros atop the leaderboard, Johnston said he doesn’t plan to radically alter his game plan tomorrow.

“I’m going to do the exact same thing,” he said. 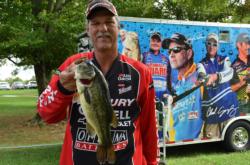 Rounding out the top-10 pros from Thursday’s opening round of competition were: 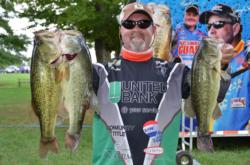 Russ Hamilton, Jr., of Manassas, Va., found himself atop the leaderboard in the Co-angler Division after landing an impressive 15-pound, 10-ounce catch from the back of the boat.

“It feels great,” he said. “This is the second time I’ve had the lead in a tournament on the Potomac River. But unfortunately, the last time I wound up finishing in eighth place. So hopefully that won’t happen again this time.”

Although Hamilton had a great day overall, it surely didn’t start that way.

“I had a horrible morning,” he said. “I lost a 5-pounder right off the bat and another 3-pounder a short time later. I usually don’t get frustrated by today it was hard not to. But then my pro partner told me to forget about it and move on. And I’m really thankful he did because, in the end, I had a really great day.”

Hamilton said he started off using a “big flipping worm” while targeting grass beds but a change of baits later in the day is what really set him on a tournament-leading course.

“I wound up catching a 4-pounder on a frog and I didn’t put that rod down the rest of the day,” he said.

Heading into Friday’s competition, Hamilton said he was cautiously optimistic.

“If the fish act like they did today, I should be in pretty good shape,” he said. 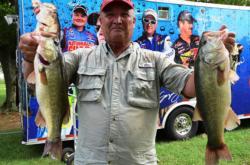 “We just had a good day – a really good day – so I can’t complain,” said Crowder. “Today went a lot better than I’d expected. It was kind of slow at times but it obviously worked out pretty well for me.”

Crowder said that he didn’t want to divulge his bait choices except to say that he relied heavily on “moving baits.” 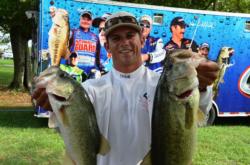 “I’m in third place so I’ll take it,” said Dziwulski. “It was slow and steady out there. But I pretty much caught fish consistently throughout the day. With the weather changes, I really had to make a lot of baits changes – I wound up switching things up all day.”

However, most of his bigger catches, including a 4-pound, 10-ounce largemouth, came on a Strike King Swim Jig.

“But throughout the day I used buzzbaits, a drop-shot and some ChatterBaits as well,” he said.

Dziwulski said that no matter what happens with the eventual outcome of the tournament, he really values his time out on the water fishing with other EverStart Series pros.

“I’m learning a lot,” he said. “I’m having a great time and my pros have been fantastic. They’re teaching me so much.” 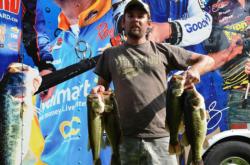 Brian Peak of Wytheville, Va., found himself in fourth place overall with a total catch of 13 pounds, 6 ounces.

Finishing the day in fifth place was Stephen Collins of Hastings, Ontario, with a catch of 13 pounds, 1 ounce.

Rounding out the top-10 co-anglers from today’s competition were: 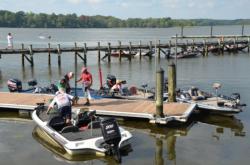