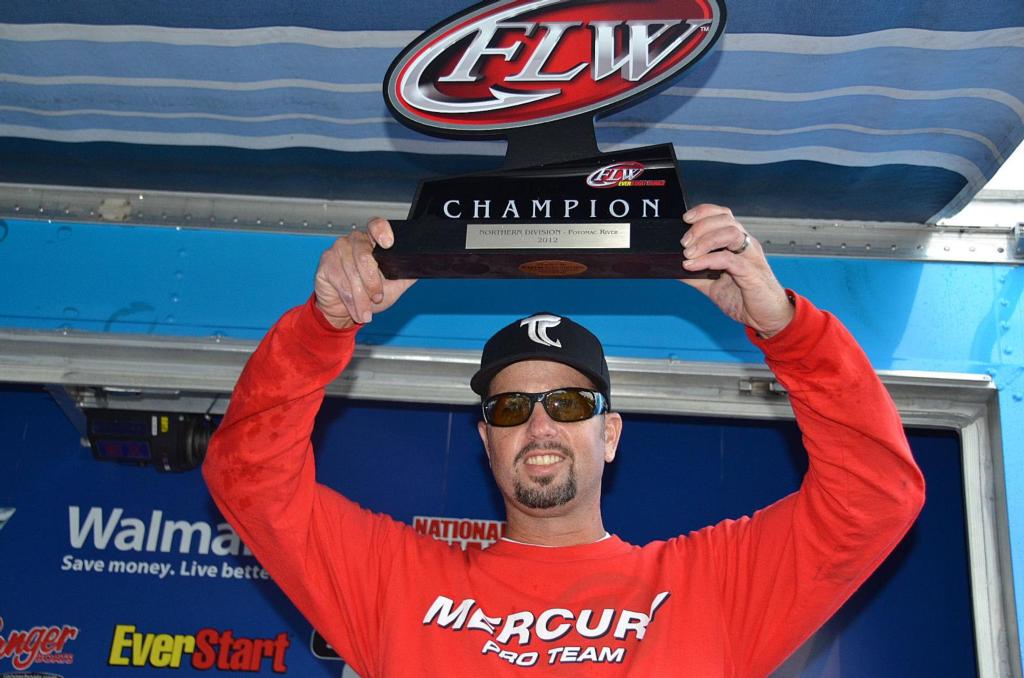 MARBURY, Md. – After dominating the EverStart Series event on the Potomac River for two straight days, pro John Hutchins of Warrenton, Va., quickly realized that the final day of competition would be a veritable minefield. With gusting winds and 3-foot swells wreaking havoc on plenty of his prime fishing holes on the main river, Hutchins knew that he had to come up with a new strategy – and fast.

“The wind was brutal today,” he said. “I wanted to fish out of the wind but I also knew that I couldn’t lose my cool. I just tried to stay calm and scratch out a limit because I knew that the fishing was probably going to be difficult for everybody. The best advice I ever got from my wife was that if it was meant to be, it would happen. I just wanted to make sure that I competed against the fish and not anybody else. Because if you’re worried about what place you’re going to finish, you aren’t going to fish your best.”

So Hutchins got out of the wind, made sure to keep a calm demeanor and concentrate on first getting that limit.

“I really wanted to fish out of the wind today so that’s what we did,” said Hutchins. “We wound up targeting a lot of docks, rock and wood and we tried to stay in one general area because I didn’t want to do a lot of running around.”

But as luck would have it, the day got off to a rough start, despite the conditions.

“I’d only missed one fish all week and I lost two fish, two good fish, in the first 10 minutes,” he said. “After that happened I said, `Oh, no.’ At that point, you really start to feel like you’re jinxed. But I just kept telling myself that the chips were going to fall where they were going to fall. So I kept my head down and kept fishing.”

Hutchins wound up employing four different baits – a frog, Senko, Zoom trick worm and a Conquistador flipping jig – and somehow managed to cobble together an 11-pound, 3-ounce limit. So while it was a yeoman-like effort, today’s limit paled in comparison to his 20- and 15-pound limits he’d caught days prior. As such, Hutchins came back to weigh-in simply hoping for the best. 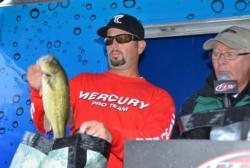 “I knew coming back in that the second- and third-place guys would have to bring in about 15 pounds to catch me,” he said. “I knew it was probably tough out there for everyone but on this river, you just never know.”

However, as the final angler to weigh-in, Hutchins walked to the weigh-in podium, dropped his sack on the scales, held his breath and anxiously awaited the results. With rain pouring down across the weigh-in stage, Hutchings finally heard the results he’d been waiting a long, long time to hear – the Virginia pro had won the title.

“Oh man, I’m ecstatic right now,” said Hutchins, who recorded a total tournament catch of 46 pounds, 12 ounces to sweep through all three days in first place. “This is exactly what I’d been looking for. This week played out almost perfectly. I’ve had a lot of second-place finishes in my career so it’s really nice to pull this off. This is the biggest win of my career. I couldn’t be happier right now.”

For his efforts, Hutchins walked away with nearly $32,000 in winnings. 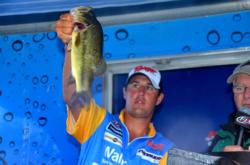 Cory Johnston of Peterborough, Ontario, finished the opening day of competition in fourth place. By the end of day two, he had climbed into third. And in the finals, based on the strength of a total catch of 44 pounds, 11 ounces, Johnston grabbed the runner-up position as well as a check for nearly $12,000.

“I figured I could get about 15 pounds a day if everything went perfectly. But today the wind was really blowing that water and wouldn’t let the tide out. And I think that hurt me a little bit,” said Johnston. “The fish just weren’t chewing today.”

Despite the wind, Johnston still turned in a valiant effort, netting the largest stringer in the Pro Division in the finals at 12 pounds, 7 ounces.

“I went out there with the same game plan I had the first two days,” he said. “Overall, it was a lot tougher out there. The morning bite was still good for me but I didn’t get the quality bites I was used to getting in my (usual morning location). So I went to a different spot and found a sunken tree and as soon as I got there I got a 4-pounder. I probably caught 15 fish total but It obviously wasn’t enough.”

Johnston said that he threw a Punisher jig, swim jig, Sweet Beaver and a crankbait to land his catch, all the while targeting ditches, some grass and wood. However, while he couldn’t pull out a victory in the end, Johnston said he had few complaints.

“All in all, things worked out pretty good for me this week,” he said. “It’s been a lot of fun and I made the top 10 so I’m pretty happy.”

After spending two straight days in the runner-up positions, Walter “Mike” Snider of Mount Airy, Md., slipped to third in the finals, largely due to the fact that he only managed to bring four fish to the scales on the final day of competition.

“The wind was really bad today. There were 3-foot swells and it was really tough out there,” said Snider, who parlayed a total catch of 44 pounds, 3 ounces into $9,000 in winnings. “My (primary) grass bed was totally blown out by the wind and had I been able to stay there for one more day, I think I would have come back with another 15 pounds. But because of the wind, we had to move to my two backup spots in the creeks. Basically, we wound up junk fishing today.”

Snider said he wound up targeting laydowns with a combination of frogs, swim jigs, ChatterBaits and Senkos.

“We were just trying to fish anywhere out of the wind because we really couldn’t control anything,” said Snider. “It was definitely tough out there today. And at times, I hated it. But overall, I had a good tournament. And I’m definitely happy to be in the top 10.” 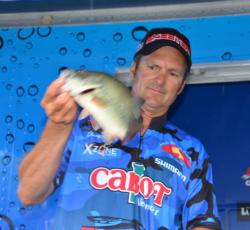 After finishing the first day of Potomac River competition in 17th place, Jimmy Kennedy of Plainfield, Vt., turned on the afterburners over the final two days of tournament action, rising to sixth on day two and completing the event with a fourth-place finish overall.

“The wind really hurt my main area today for sure; it got all muddied up,” said Kennedy. “I also didn’t get any big bites today.”

Like many pros, Kennedy had to change strategies on the fly once he realized his prime areas would be unfishable.

“We wound up throwing everywhere,” said Kennedy, who primarily targeted bass with a Toad’s Tackle Shack chatterbait. “If we found some grass, we’d throw at it – just about anything we could find.”

However, Kennedy was perhaps the most upbeat of all of the top five-finishers not named Hutchins.

“It’s been a lot of fun this week,” said Kennedy, who hauled in a total weight of 39 pounds, 11 ounces to walk away with over $8,000 in winnings. “It’s been great. After yesterday, I felt like I already won. Anytime you make the top-10 you can’t really complain.” 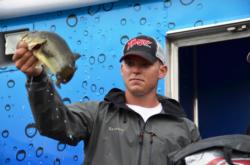 Although he started the day in the 10th and final qualifying position, Micah Frazier of Newnan, Ga., grabbed fifth place overall when all was said and done with a total catch of 37 pounds, 9 ounces.

“It was really tough out there today, but this is still an awesome fishery,” he said. “I had a good bag the first day but it’s fallen off for me every day since. And to be standing up here right now with a top-10 finish, that’s pretty awesome.”

For his efforts, Frazier took home over $7,200 in winnings.

Rounding out the top-10 pro finalists were: 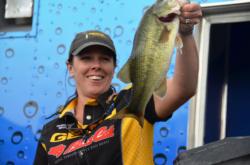