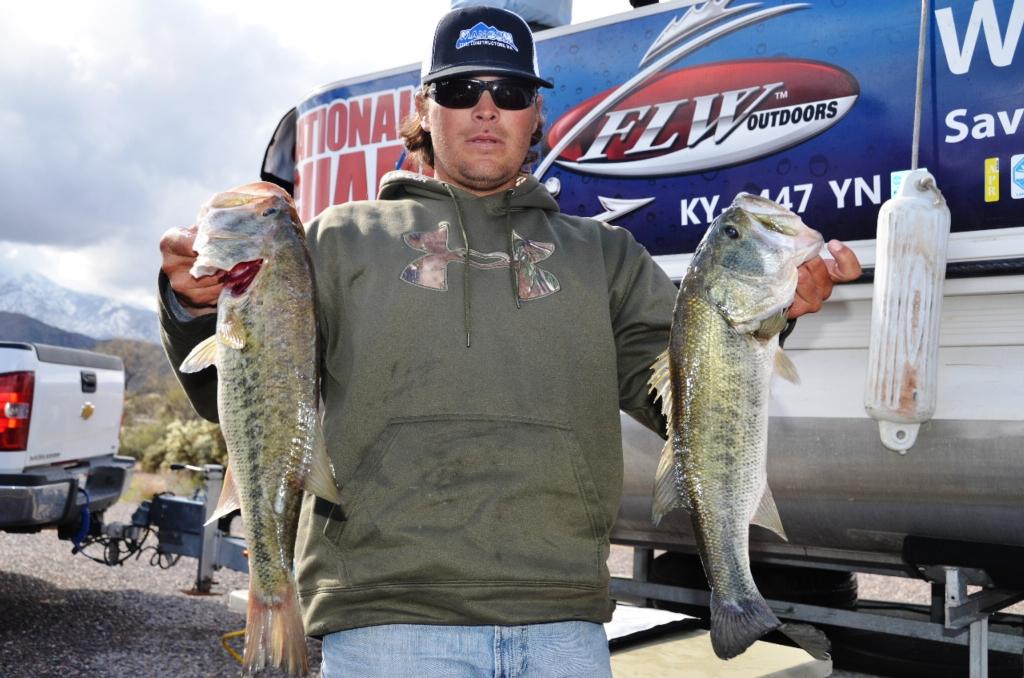 ROOSEVELT, Ariz. – As widely predicted, Thursday’s EverStart Series competition on Lake Roosevelt was nothing short of a grind. With only 20 total limits caught in the Pro Division and a scant 10 total in the Co-angler Division, it was more than obvious that the near-freezing temps, low water levels and fickle bass bite had taken a heavy toll on the field.

Throw in the fact that 135 anglers couldn’t even break the 6-pound mark and it was clear that fishing Lake Roosevelt this week will not be for the faint hearted. That being said, there were a few surprising standout efforts. Leading the pack in that department was local pro Levi Armstrong of Payson, Ariz. Despite the difficult conditions, Armstrong managed to bring in a relatively eye-popping limit weighing in at 15 pounds, 7 ounces – by far the largest stringer caught all day.

However, the most amazing thing about Armstrong’s day was that it apparently could have been a whole lot better.

“I lost some fish this morning, including my first one which probably would have weighed in at 3 or 4 pounds,” said Armstrong. “I really think I could have weighed 20 pounds today, but I decided to leave my fish alone in my (prime fishing) area.”

Given his local knowledge, Armstrong is no stranger to Lake Roosevelt – and today that proved to be the deciding factor.

“I’ve fished this lake for 12 to 14 years now and that obviously helped,” he said. “But I had the worst practice I think I’ve ever had so I wasn’t very confident coming into today. But then I started looking back at some of the past tournament I won here and that helped me to get focused. I wound up fishing an area that I’ve fished many times before and doing the exact same thing that won me a tournament here last year.”

According to Armstrong, that “same thing” was flipping trees and bushes in 3 feet of water with a lure he didn’t feel comfortable divulging at this time.

“I went to this area in practice and caught a few fish, but they were pretty scattered. Today they all seemed to bunch up and that made it easier,” said Armstrong. “I saw a couple of guys fishing in the same area but they were running through it doing something a little different than what I was doing. I really think my (bait of choice) made all of the difference today. That was key.”

Armstrong said he caught a total of seven fish, all in a two-hour period.

“I had a limit by 10 a.m.,” he said. “I didn’t catch a lot of keepers today but I was really going after the bigger bites. And it really paid off. I’m excited. I just hope everything works out tomorrow.” 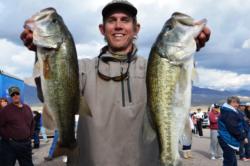 Despite only boating three fish in today’s competition, Joseph Caporuscio of Coto De Caza, Calif., had more than enough weight to make some real noise during the first day of tournament action, recording a total catch of 13 pounds, 3 ounces to grab second place overall in the Pro Division.

“I knew that the bite was going to be tough today and I actually told my co-angler partner that I would be happy with three keepers. And what did I wind up catching? Yup, three keepers. So that was pretty dumb. I really wish I hadn’t said that now,” joked Caporuscio.

Although Caporuscio said he will spend the rest of the day thinking what could have been with a five-fish limit, he also said he was more than happy with his total weight heading into Friday’s crucial day of competition.

“I’m still very blessed,” he said. “I really didn’t have a lot of time to practice and the fishing was really tough today. So, overall, I can’t complain.”

Caporuscio said the key to his success today was his ability to cover a lot of water.

“I probably went to about 20 different spots today so I really covered a lot of water,” he said. “I really bounced around a lot. I was also fishing really fast.”

For Caporuscio, reaction baits were seemingly the key to his success.

“I was throwing ChatterBaits, Rat-L-traps and spinnerbaits and (targeting) fish in shallow water anywhere from zero to 10 feet,” he said. “I was mainly keying on banks with structure and rock.”

“I think the weather might change a bit,” he said. “I think the skies are going to clear up and wind might calm down. And if that happens, I think I might have to change things up as well. I’ll probably have to slow way down. But we’ll just have to see how it goes.”

Caporuscio also landed the day’s big-bass award after netting a 6-pound, 1-ounce largemouth. That catch alone was worth $186. 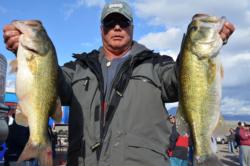 Sean Brennan of Prescott Valley, Ariz., parlayed a total catch of 12 pounds, 10 ounces into third-place overall in the standings. However, like most of the field, he said the fishing conditions today were far from ideal.

“We worked really hard out there today,” he said. “But overall it was a pretty good day especially since I had such a horrible practice. In fact, I didn’t catch any bass in practice – so on Wednesday, I decided to come up with a new game plan. And it really paid off.”

Brennan said that he ultimately wound up targeting steep ledges with a combination of crankbaits, spinnerbaits and jigs.

“We found some steep ledges and that’s where we had our best luck,” he said. “I was basically throwing my bait shallow and dragging it down into deeper water while keeping in contact with the bottom of the lake as much as possible.”

As for the rest of the tournament, Brennan plans to stick with a similar strategy going forward.

“I’ll probably go with the same game plan tomorrow and hopefully (my areas) will hold up,” he said. “I love to fish when it’s overcast like it was today and tomorrow it might clear up – so who knows? But no matter what, at least after today I gave myself a chance.” 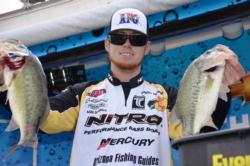 Rounding out the top-five anglers in the Pro Division was Josh Bertrand of Gilbert, Ariz., who netted a total catch of 12 pounds, 8 ounces.

“I honestly thought the day was going to be a lot worse,” said Bertrand. “The water was a lot colder than I had expected and I only got five bites total – but they were good ones. And that really helped. But it was a major grind out there to be sure.”

Bertrand said that he his practice time didn’t help him much either.

“I really didn’t have a great practice,” he said. “So today I just approached this like just another practice day and went pre-fishing. Luckily for me, everything worked out. I wound up doing a little bit of everything – junk fishing basically. But when it gets tough that’s not a bad strategy.”

Using a combination of spinnerbaits and jigs, Bertrand said that he covered plenty of water, targeting rock and brush in anywhere from zero to 20 feet of water.

But while making the top five is nice, Bertrand said he realizes it’s still very early.

“It was a great surprise to catch what I caught today,” he said. “But I know there is still a lot of time left in this tournament. And it’s going to be real tough fishing again tomorrow. But if I can land five good keepers again, I should be in pretty good shape.” 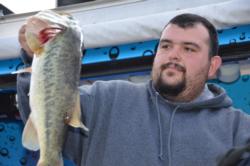 David Avina of Sun City, Calif., appears to be picking up right where he left off. After taking an almost five-year hiatus from tournament fishing, Avina entered the first EverStart Series event of the season at Lake Oroville this January and wound up placing fourth. Now, with one day under his belt at Lake Roosevelt, the California native sits in the driver’s seat in only his second event of the season, grabbing first place overall with a total catch of 11 pounds, 15 ounces.

Not bad for somebody who is still trying to get his feet wet.

“I couldn’t have possibly asked for anything better today,” he said. “The fishing was definitely tough. But I really like tough tournaments.”

Avina credited his uncle’s homemade, hand-poured worms for his success.

“I caught six keepers today and I wouldn’t have gotten my limit without those special hand-poured worms,” he said. “The key was the color of those worms. With all of the stained water, it was important to find a color the fish could see. I tried a lot of reaction baits in practice but I couldn’t get anything to bite. So I went with the worms and I got 11 pounds. Like I said, I couldn’t be happier.”

Avina said he didn’t target anything specifically. Instead, he just tried to take advantage of every opportunity that arose.

“I was basically throwing my bait everywhere, mostly in 2 to 20 feet of water on a drop-shot,” he said. “I expected it to be tough out there and it was. And that’s when you really have to stay focused. I only had three fish in the boat at 1 p.m., so to catch three more keepers throughout the rest of the day was great.”

Avina also won the day’s big-bass award in the Co-angler Division after landing a 6-pound largemouth. His catch won him an additional $124. 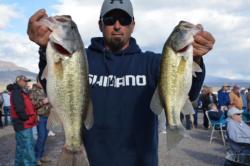 “For me, the fishing was actually a lot better than yesterday,” he said. “I was basically dragging a jig, bouncing my bait off rocks in anywhere from 7 to 20 feet of water. The fish were kind of scattered and they were tough to pin down. But I was able to catch a limit so I was pretty happy.” 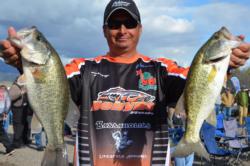 Tony Zanotelli of Redding, Calif., parlayed a total catch of 10 pounds, 11 ounces into a third-place finish in today’s competition. But like most of the field, Zanotelli said the fishing was tough.

“It’s been a horrible bite all week and it was tough out there today – although it was a little better than it had been,” he said. “I actually blanked one day in practice so I was just hoping to catch a limit that weighed 6 or 7 pounds today. So I’m pretty happy right now. I’m pretty excited.”

Zanotelli said that he threw a combination of drop-shots and jigs in deeper water and threw crankbaits to tapered banks when his pro went shallow. Overall, Zanotelli said he wound up fishing anywhere from zero to 25 feet of water.

“Today I wound up with eight or nine bites so I feel pretty fortunate,” he said. “It’s the most bites I caught all week. Going forward, I really think if you can just get five bites and get them in the boat, you should be alright.”

Rounding out the top-five co-anglers was John Stewart, Jr., of Glendale, Ariz., who recorded a total catch of 9 pounds, 2 ounces.

EverStart Series action continues 7 a.m. Friday morning at takeoff at Cholla Recreation site in Roosevelt, Ariz.. Takeoffs and weigh-ins are free and open to the public. 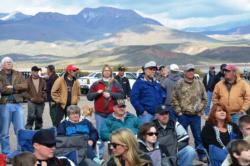