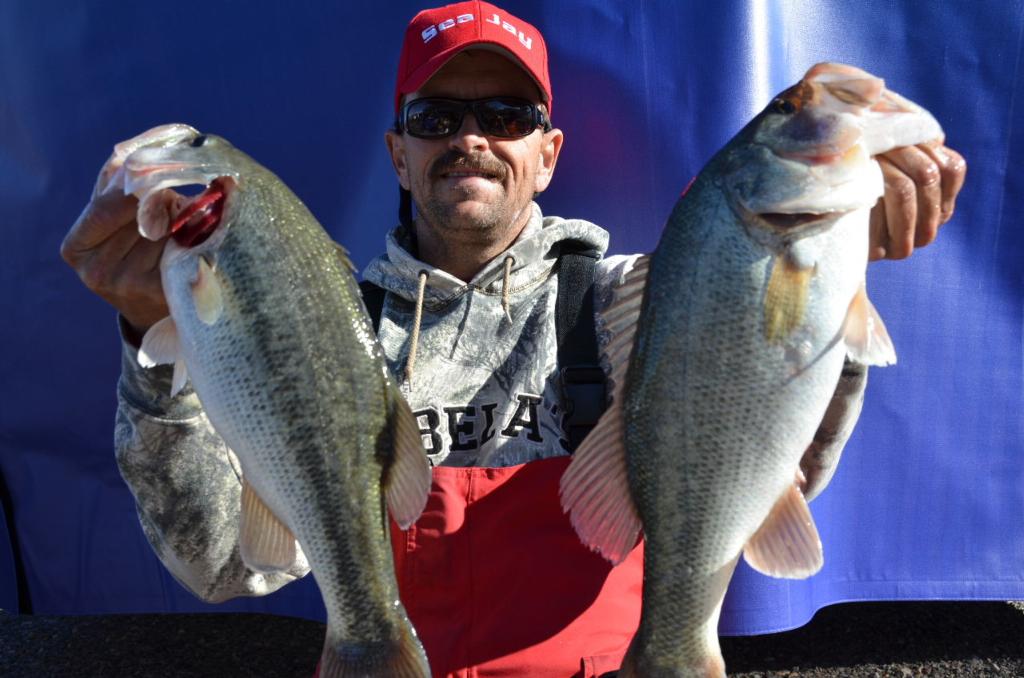 ROOSEVELT, Ariz. – After the opening day of EverStart Series Western Division competition on Lake Roosevelt, plenty of anglers expressed their dismay at how difficult the fishing conditions were. Well, today – much to the chagrin of pros and co-anglers alike – the bite turned out to be even more brutal.

Consider this: The entire pro field landed 104 pounds less weight than Thursday’s total catch. Out of the top-10 pros to make the cut, only four had five-fish limits and another four recorded three fish or less. On the co-angler side, the results weren’t much better with only seven total limits to show for the entire field.

Many anglers chalked up today’s tough conditions to the arrival of bluebird skies as well as the fishing pressure from opening day. However, as usual, there were a few anglers who managed to successfully navigate the many pitfalls that Lake Roosevelt has presented throughout the week. And topping the list after Friday’s weigh-in was John Fuqua of Oxnard, Calif. In the end it was Fuqua’s consistency that propelled him atop the leaderboard with a total, two-day catch of 22 pounds, 2 ounces.

“I’m happy I’m in the lead but the fishing was really tough,” said Fuqua, who somehow managed to grab hold of the top spot in the standings despite only weighing in seven fish total all week. “I only caught three fish today out of four bites; and yesterday I had four fish and lost one. But I’ve been getting the right bites and that’s helped. Obviously, on this lake with these conditions, you have to capitalize on every opportunity.”

Fuqua said he has been targeting largemouth bass with crankbaits in relatively deep water, keying in on one specific area for the majority of his catch.

While Fuqua said he was generally pleased with his performance to date, he said he has some concerns that his area will be able to hold up for one more day.

“I’m really worried that I’m running out of fish,” he said. “But then again, you never know. No matter what, I’m going to be able to fish more loosely tomorrow. And if I can get a limit, I know I’ll go home with a big check.”

But now that Fuqua is in the lead, what would a tournament title mean?

“I’ve never been in the lead before on day two in this big of a tournament,” he said. “I’ve won some team tournaments in the past, but this would be the biggest win of my career. So it would mean a lot.” 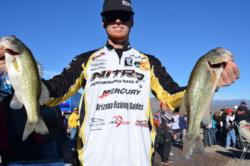 Josh Bertrand of Gilbert, Ariz., netted a two-day catch of 19 pounds, 5 ounces to grab hold of second place heading into Saturday’s all-important final day of competition. And nobody seemed more surprised than Bertrand himself.

“It was obvious fairly early on that what worked yesterday wasn’t going to work today,” said Bertrand. “Having to fish with bluebird skies immediately after a cold front is tough. But the low weights (recorded) today are amazing. It’s just crazy. So yeah, I was really happy to have these fish today.”

“I did a ton of running and gunning in the morning and then just grinded it out in the afternoon,” he said. “The key was to slow it down. I wasn’t getting any love with the shallow bite today so I decided to go deep, fishing anywhere from 25 to 40 feet.”

Although it was tedious at times, the Arizona native said he used a combination of a drop-shot and jigs to land his four-fish catch.

“When you fish that slowly, you have to be fishing something very specific,” said Bertrand. “Luckily, I’ve got to fish this lake quite a bit over the years so I know some of these areas pretty well. And that helped me. But the areas I fished today, I didn’t fish at all yesterday.”

As for the finals, Bertrand said that he still hasn’t made up his mind about how to attack Lake Roosevelt with a title on the line.

“Tomorrow I’m going to have to really decide if I’m going to be swinging for the fences or whether I should just try to grind out a five-fish limit,” he said. “Normally this lake is so much better than this. So it’s going to be a tough decision.” 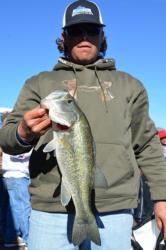 After leading the tournament heading into today’s competition with a stellar day-one catch registering 15 pounds, 7 ounces, local pro Levi Armstrong of Payson, Ariz., saw the proverbial wheels come off his tournament day strategy in Friday’s competition. In the end, Armstrong only managed to bring one 3-pound, 7-ounce fish to the scales today for a total weight of 18 pounds, 14 ounces.

“I just didn’t make the right decision today,” said Armstrong of his difficult day on the water. “I was flipping creature baits to mesquite bushes in about 3 or 4 feet of water all day, but looking back I probably should have gone with baits with a more subtle profile. It was frustrating. I didn’t have any fish in the boat until 2:40 p.m. And then with time running out, I lost a 5-pounder right at the boat. So it was definitely a tough day out there today.”

However, there appeared to be a silver lining for Armstrong. Not only did he qualify for the finals in third place after recording only one fish in today’s competition, but Armstrong believes that his prime fishing area just might be turning on at the most opportune time. 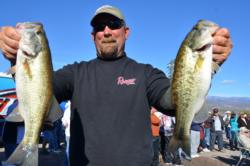 “I’m happy to be where I’m at,” Michels said. “It feels great to do well in a tournament this tough – and it’s been brutally tough. I honestly thought I’d finish around 15th place. But the bite’s been difficult and obviously a lot of people struggled.”

Michels said with the bite this difficult, the tournament really becomes a mental test of wills.

The California pro said he has adopted a two-tiered strategy throughout the tournament and plans to stick with the same game plan tomorrow.

“I’ve been running points and flats throwing a drop-shot in the morning,” he said. “Then when the water warms up to 53 degrees, I start throwing a crankbait looking for the bigger bites. Ideally tomorrow I’ll get a limit early and then dedicate the rest of the day to throwing a crankbait. And hopefully I can move up a couple of spots in the standings. There are still some big fish out there. And all it takes is one good bite to make up some serious weight in a hurry.”

Tai Au of Gilbert, Ariz., finished the day in the fifth qualifying position with a total catch of 16 pounds, 7 ounces.

Rounding out the top-10 pro qualifiers:

David Stachowski of Tucson, Ariz., won the day’s big-bass award with a 5-pound, 11-ounce largemouth. For his efforts, Stachowski earned $186.

Leue back on top 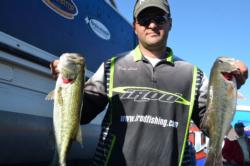 “I feel great. I’m definitely happy,” said Leue, who recorded a two-day total catch of 17 pounds, 2 ounces. “I only had three fish yesterday but they were good quality. And today I managed to catch a limit. I knew coming into today’s competition that I had a good shot to do well. I just had to execute. It’s tough out there. But so far, so good.”

Leue said that he has been drop-shotting a 4-inch worm by Atomic Bait and Tackle, concentrating on rocky structure in approximately 20 to 25 feet of water. However, while Leue often makes it look easy, he insists that has been far from the case this event.

“Yesterday I only had four bites. I got all four fish in the boat but one was short,” he said. “Today, I got nine bites and caught eight fish. So it’s not exactly like I’m catching a ton of fish out there. But the key is when you do get a bite – and the bites have been really subtle this week – you have to take advantage.”

Kline moves up to second 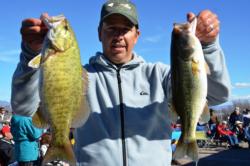 “I feel pretty good. I’m on the top of the moon right now,” said Kline of today’s finish. “We had a super fun day and that’s why you do this.”

Kline said that he has been employing finesse-fishing techniques, targeting rocks and isolated trees to land the majority of his catch.

“I got some bites in practice with this finesse bait and it really gave me some confidence,” said Kline, who didn’t want to divulge too many specifics. “But the key is fishing really slowly. And just when you think you’re fishing really slowly, you need to go even slower. I’ve basically been fishing shallow, anywhere from zero to 30 feet. I had 13 fish yesterday and only seven today. So it’s tough out there.”

The California native was also helped by some last-minute heroics.

“We staying in this one area all day and then with about a half an hour left in the day, I hooked into this smallmouth,” he said. “It must have jumped 3 feet in the air right at the boat and then dove straight down. But luckily, I managed to get it into the boat.”

John Stewart, Jr., of Glendale, Ariz., grabbed hold of third place heading into the finals with a total catch of 15 pounds, 10 ounces.

Rounding out the top-10 co-angler qualifiers: 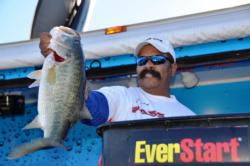 Gerard Thomas of Ralston, Wy., landed a 5-pound, 8-ounce largemouth to net the day’s big-bass honors in the Co-angler Division.

EverStart Series action continues during Saturday takeoff, scheduled to take place at 7 a.m. at Cholla Recreation site in Roosevelt, Ariz.. Takeoffs and weigh-ins are free and open to the public. 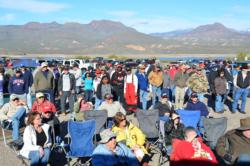