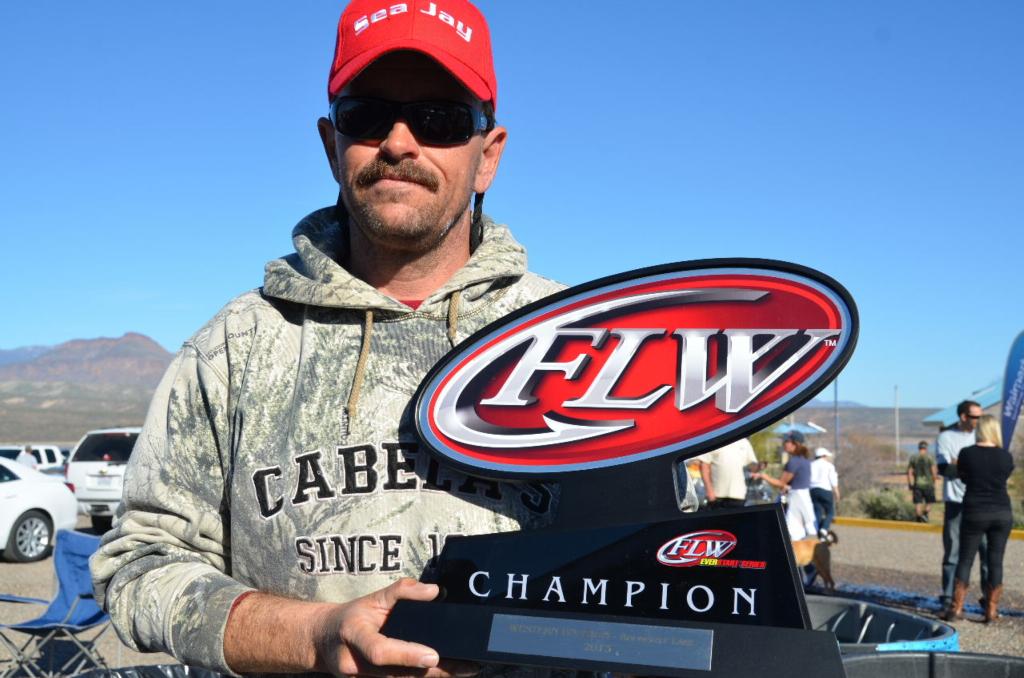 ROOSEVELT, Ariz. – A few weeks ago, John Fuqua of Oxnard, Calif., wasn’t even sure he wanted to fish the EverStart Series Western Division event on Lake Roosevelt. But thanks to a timely conversation with a good friend, Fuqua decided to throw his hat in the ring. As it turns out, it was a fateful decision he’ll remember for the rest of his career.

Bolstered by a final-day catch of 9 pounds, 1 ounce, Fuqua won the EverStart title on Lake Roosevelt going away.

“I’ve never won an FLW tournament before and I’ve never even lead a major tournament going into the finals,” said Fuqua, who boated a total, three-day catch of 31 pounds, 3 ounces – 5 pounds, 6 ounces more than his next closest competitor. “So to win the title here is absolutely huge. Huge. I’ve been working for this win for a while. This lake has always been special to me. I’ve cashed a check every time I’ve come here. It just feels great.”

Amazingly enough, Fuqua won the tournament title even though he only brought a total of 10 fish to the scales all week, which included a dangerous three-fish catch in the final round.

As a consequence of the brutal fishing conditions that anglers faced all week – including fishing during the back end of a cold front, water levels 30 feet below normal pool, a virtually non-existent prespawn bite and bluebird skies over the final two days of tournament action – Fuqua gambled that big bites would be more important than small limits. As it turned out, he was spot on. 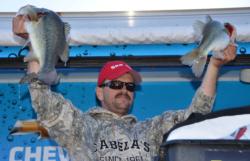 “The smallest fish I caught all week was a 2-pounder that I weighed in today,” he said. “I didn’t get a lot of bites this week, but the ones I did get were quality bites. And that was my plan all along – to go for the big bites.”

Fuqua said that he targeted largemouth bass with a deep-cranking pattern, relying on a Norman Lures DD-22 crankbait in a firetiger color to land the majority of his catch.

“I was fishing rock and brush on the edges of breaks and creek channels in anywhere from 6 to 20 feet of water,” he said. “Like everyone said, the fishing was really tough all week. I mean, I didn’t catch one limit the entire tournament. But I put myself in a position today where the guys were really going to have to catch them in order to beat me. It was a grind out there. But I couldn’t have asked for a better week.”

For his efforts, Fuqua took home nearly $28,000 in winnings – as well as the first major tournament title of his career. 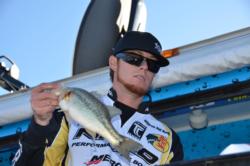 Heading into the final day of competition on Lake Roosevelt, second-place qualifier Josh Bertrand of Gilbert, Ariz., had his sights squarely set on a tournament title. Unfortunately, in the end, his 6-pound, 8-ounce stringer came up a little short in the finals.

“I really wanted to bring in a limit today but I came up one fish short,” said Bertrand, who ultimately recorded a three-day limit of 25 pounds, 13 ounces. “I really wanted to make sure that I did everything possible to come back with a limit, but it was really tough out there. It was just a grind all day. At no time did the bite really excel like I hoped it would.”

Bertrand said that he tried to employ a two-pronged strategy, but the bites were just not there today to execute his game plan.

“We started out early fishing some reaction baits – a Pepper spinnerbait and a Spro crankbait – just trying to catch a big one. But it really wasn’t working out so I switched over to a drop-shot for the rest of the day. We’re targeting rocks in about 20 to 40 feet of water and I was really hoping to get a limit with time to spare so I could go after some bigger bites. But I just never got one. I only wound up with four bites all day. It was really a grind out there.”

In the end though, Bertrand said he was happy with his overall performance.

“It was tough fishing,” he said. “But to make it to the top 10 with these guys is special.” 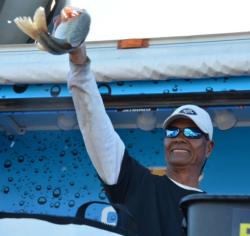 Veteran angler Ri Nay of Tucson, Ariz., finished the day in third place with a total catch of 24 pounds, 10 ounces.

“It was a pretty great tournament for me,” he said. “I caught a lot of fish but unfortunately I could never get that one good kicker fish.”

Nay said that he fished rocky points near steep drop-offs with a combination of Strike King crankbaits and 4-inch Yamamoto jigs in a green-pumpkin color on 12 to 15 pound test line. However, for Nay, the key was speed – or lack thereof.

“The most important thing for me was to fish very slowly,” he said. “You had to fish slowly to get those bites.”

All things being equal, Nay said that the difficult fishing conditions anglers faced all week never dampened his spirits.

“Even though it was bad weather all week, I still had an awesome time,” he said. 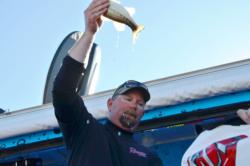 One of the best western sticks in the business, Jeff Michels of Lakehead, Calif., finished the day exactly where he started – in fourth place. However, it wasn’t for lack of trying.

“I started out the day fishing a drop-shot, caught one small fish and realized that there was no way I was going to win if I kept doing this,” said Michels. “So I switched it up and started cranking a firetiger Bomber Fat A – and that’s what I wound up catching all of my big fish on.”

However, it didn’t help that Michels lost some key fish when it counted most.

“During the last part of the day my fish really started to move in,” he said. “I really wished I could have stayed there another hour. But I missed two or three fish with about a half hour to go. And I missed (landing) my fifth fish with 15 minutes left in the day so it was really frustrating.

“I’m just a terrible crankbait fisherman,” joked Michels. “And I’m telling you, the next tournament I come to where there is a crankbait bite, I’m going to finally know how to throw one.”

Michels said that he targeted staging fish near river channel walls that were abutting points to land the majority of his catch.

“You know, I decided today to finally swing for the fences and I connected once or twice but it wasn’t enough,” he said. “It was definitely a tough bite out there. But overall, I definitely had a great week.”

Although Michels didn’t get the title he’d hoped for, he left Lake Roosevelt with his head held high knowing that he just concluded back-to-back top-10 finishes in the Western Division. And for his efforts, Michels now heads into the Cal Delta event as the overall points leader in his division – not to mention the fact that he’s now $6,300 richer. 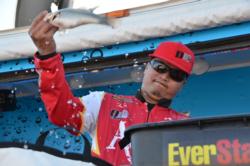 Tai Au of Gilbert, Ariz., parlayed a total catch of 22 pounds, 12 ounces into a fifth-place finish at Lake Roosevelt. And it just might have been the most difficult top-10 finish of his career.

“This is the toughest fishing I’ve ever seen,” he said. “So I’m pretty happy to be up here right now.”

Au said that he fished a Robo worm almost exclusively this week – and today was no different.

“You pretty much had to change up the colors each day,” he said. “Whatever new color you threw, that seemed to be what the fish wanted. Normally I’m a river guy. But the fish were really scattered so I wound up fishing the main lake this week.”

Overall though, Au said he was pleased with the end results.

“It was definitely a tough tournament. But to fish with these guys, especially Ri Nay who I looked up to as a kid, was just awesome.” 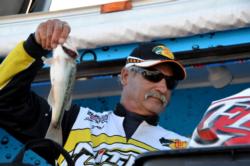 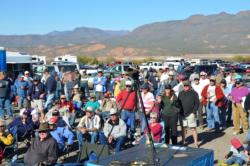